We made a small detour to one last station on the U.S. side of the border around 10:30 last night. This enabled us to delay our entrance into Mexican waters until Tuesday, when Mexican government facilities reopened after being closed on Monday in observance of Día de la Constitución.

After another late night of sampling, sorting, labeling, relabeling, and setting up for the next station, we awoke this morning to find ourselves in Mexican waters…. in spitting rain and the roughest seas we’ve seen yet. To be fair, these weren’t “batten down the hatches” conditions, but for a rookie such as myself, there was a lot more stagger in my swagger today.

In spite of less-than-ideal conditions for sampling on the Western Flyer’s rear well deck, today I overheard Gernot Friederich complimenting the quality of the sampling. His chemical analyses were showing very low levels of oxygen in samples taken from the deep ocean. On the plus side, this is a testament to the skill of the samplers—the samples are being done quickly, without being contaminated with oxygen from the air when the water is transferred from the Niskin bottles on the CTD to the flasks used for testing. On the downside, this is not such a good indication for the ocean and its denizens. 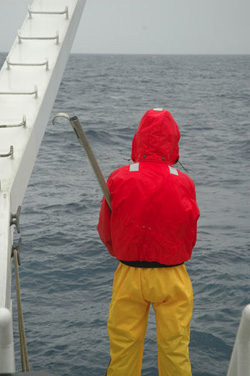 Chris Wahl waits in the rain for the CTD to return to the surface.

This recent decline in oxygen was first perceived around 1997-98; however, this isn’t the first time the amount of oxygen in the ocean has declined. Oxygen levels in the ocean do seem to vary on a multi-decade cycle. There have been periods in the last century in which oxygen levels have declined noticeably, and then they’ve come back. However, Francisco Chavez points out that if we go back and look at oxygen levels all the way back to the 1930s, we don’t see anything that’s as low as it is today.

It also seems that there might be a correlation between a warmer world and lower oxygen levels in the ocean, and we’ve been experiencing a decades-long warming trend that began around the 1920s. Exactly how or if the two phenomena are connected is one of the things that the scientists on this cruise hope to parse out. 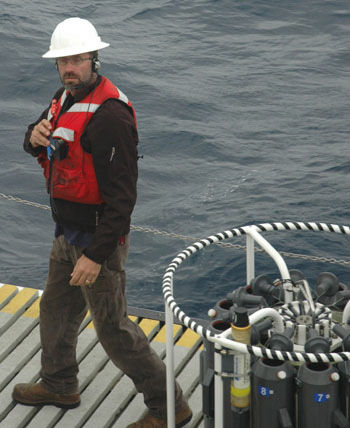 CTD technician Erich Reinecker on the well deck of the Western Flyer. With the headset he’s wearing, Erich communicates with the captain, the winch operator, and Curt Collins, who is monitoring the real-time readings the CTD is sending back during the cast. 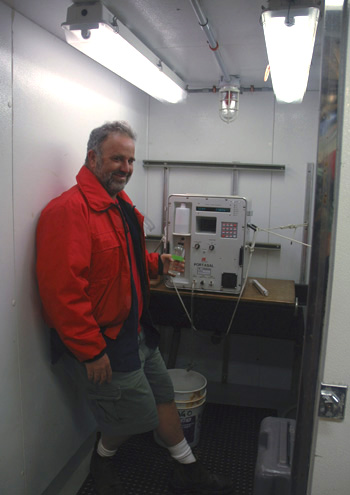 Tim Pennington at the instrument for running salinity tests, which are usually performed by Curt Collins.

So what does this all mean? Well, if you’re a scallop, or a mussel—if you live in the ocean and rely on the oxygen dissolved in its waters—it means it may get very difficult to breathe. As an oxygen minimum zone expands and seeps up onto the continental shelf, that’s very bad news for stationary seafloor dwellers, who can’t move out of its path.

And speaking of paths, fortunately ours and the storm’s that we’re under right now are headed in different directions. I’m hoping tomorrow morning’s Mexico is the tropical Mexico I was expecting.