By nine o’clock last night both CTD rosettes were back on deck, Francisco Chavez and Haibin Zhang had finished their plankton tow, and our captain, George Gunther, set the Western Flyer’s course for an overnight steam to today’s station, “UC4.” UC4 is situated in the Outer Santa Barbara Passage, between two of the Channel Islands— Santa Catalina on the west, and San Clemente on the east.

Now, I know that I told you yesterday there might be some preliminary results for you to see regarding the present oxygen levels in the California Undercurrent in comparison to 2003. And they’re in. But before I give them to you, I’m going to take advantage of your rapt attention to explain a couple of things. 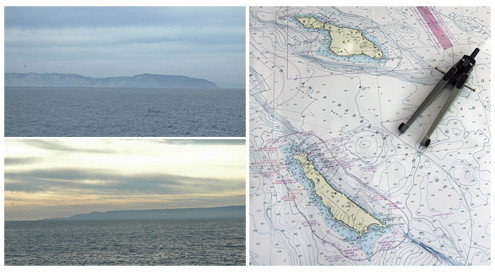 Top left: Santa Catalina off the port bow. Bottom left: And San Clemente off the starboard. Right: Nautical chart showing the Outer Santa Barbara Passage through the Channel Islands. The right point of the compass indicates the location of today’s sampling station.

The first is where the data you’re about to see come from. I’ll give you a hint: it starts with a “C” and ends with a “D” (and there’s a “T” in the middle). Mounted on the CTD—sorry, I guess I gave it away—is an oxygen sensor. This sensor is continuously taking readings (several per second) of the oxygen level in the water as the CTD travels down from the sea surface and then back up through the water column. These readings are being sent back up a thin wire nested inside the heavy-duty cable pulling the CTD up from the depths. Finally, an onboard computer decodes and records the data.

Once the oxygen-level data have been recorded, they can be processed and then compared to past data; for example, the oxygen levels from the 2003 expedition. Which I’m about to show you—I just need to tell you about one more thing first.

If you read yesterday’s blog, you probably noticed the word “meticulous” came up more than once. Yes, I did forget to bring a thesaurus, but let’s not let that diminish the importance of that attitude. And you can bet that because oxygen-levels are at the center of the research being conducted here, they’re the subject of quite a bit of meticulous attention.

In addition to the measurements made by the sensor on the CTD, after the rosette is hoisted back onto the well deck, the first samples that are taken will be analyzed for their dissolved oxygen content. It’s important that the oxygen samples are drawn from the Niskin bottles first. The deep water is “hypoxic”—very, very low in oxygen. When that water reaches the surface and is exposed to the air, which has a much higher concentration of oxygen, the oxygen in the air makes a bee-line for the water, where it’s in a much lower concentration. If too much atmospheric oxygen makes it into the seawater, the sample is no longer an accurate representation of the seawater at depth. 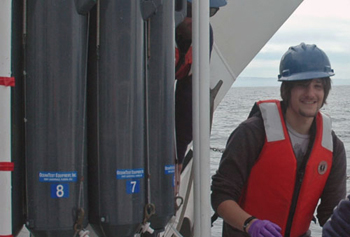 Once the water is drawn from the Niskin bottles, reagents are added to measure the oxygen content in the flasks, and the flasks are then brought to Gernot Friederich, who will analyze them on the machine he built for this purpose. Later on, Gernot’s measurements will be used to verify and calibrate these data the CTD sensor returned. 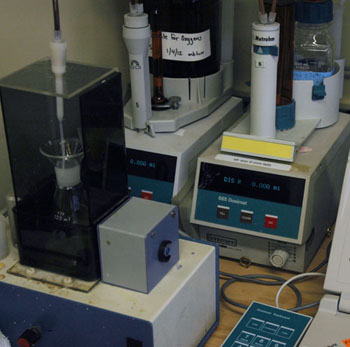 And now, since you’ve all been such patient readers—and because you now understand what lengths everyone here has gone to in order to get these data, you’ll appreciate it that much more—without further ado… here are the results of our cast at station UC2 about 80 kilometers (50 miles) due west of Pismo Beach … 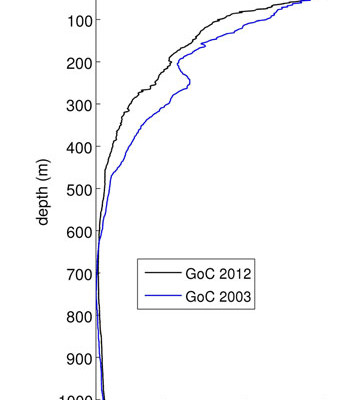 Line graph showing the oxygen content at Station UC2 of samples taken in 2003 against the samples taken yesterday. The 2012 levels are significantly lower. Admit it, you never thought a data plot could be so exciting!

Tomorrow, our first cast in Mexican waters, and what the graph above says about our planet…