It’s just after midnight, and we’re standing on the rear deck as the winch pulls the CTD rosette through the last few meters of water and back through the ocean’s dark surface. Tim Pennington is wondering if when we collect the water for the oxygen samples, rather than both of us doing everything, maybe it’s better to have one person fill the flasks with the deep-seawater while the other adds reagents and mixes. It’s a relatively minor matter, but it seems important.

Earlier in the day, Tim’s rustling through drawers trying to find electrical tape to use for a label. Some white tape is handed to him, but white tape won’t do. He’s looking for a specific color of tape. (Though white tape does end up having to do; after all, we’re at sea and you can only bring so much with you.) Following this morning’s CTD cast, after filling out the data sheet verifying all the samples needed were taken, it’s decided another revision to the data sheet would clarify the regimen even further.

The point here is that this is the type of meticulousness and attention to process that becomes ingrained in a person when they’ve spent the last twenty years helping to painstakingly construct a scientific data set measuring the biological and chemical characteristics of the waters in the Monterey Bay. This data will be used to support some weighty theories about climate variability, and will likely need to bear heavy scrutiny. So process matters – bottles and vials go out on deck labeled and in numerical order depending on which Niskin bottle the water they’ll hold will come from—bottle #1 is 1,000 meter water, #2 from 900 meters… 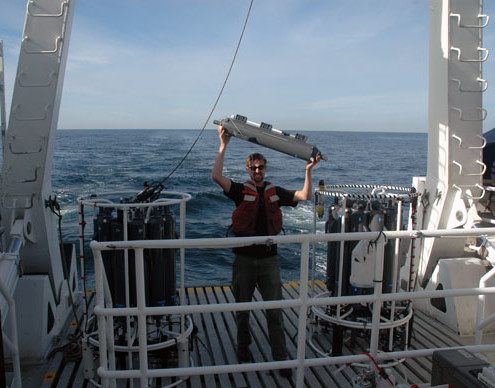 Chris removes a Niskin bottle from the rosette for “restringing.” The samples collected in each bottle are “discrete,” that is, they each represent a specific depth. If a bottle doesn’t seal completely and there’s a chance the water in the bottle isn’t exclusively from that depth, the sample must be dumped.

The Biological Ocean group (BOG)—represented on this cruise by Francisco Chavez, Tim Pennington, Gernot Friederich, Marguerite Blum, Monique Messié, and Chris Wahl (Erich Rienecker is a BOG alum as well)—has been running an ocean observing program in the Monterey Bay for more than two decades. They’ve gathered a historical record of seawater measurements that has provided insight into how the ocean responds to large scale climate change.

When you are meticulous about the data you collect, then when things change, even slowly (like decades slowly), you notice it. We’re out here cruising down the California coast because of changes the Biological Ocean group sees in the data they’ve been so conscientiously and consistently collecting. After measuring oxygen and productivity levels for more than 20 years, researchers noticed that the waters in the bay have become colder and more productive in the last decade, and there is conspicuously less oxygen. They’ve also noticed the waters have become more acidic—there’s more carbon dioxide (and other forms of “inorganic” carbon) dissolved in the water. 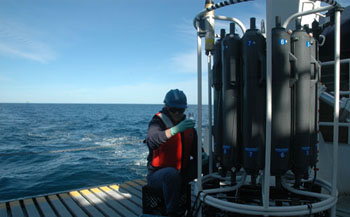 Marguerite Blum on the well deck of the Western Flyer drawing samples from the Niskin bottles brought back from the depths during this morning’s CTD cast.

A water sample is drawn from bottle #9. This sample will be analyzed for its ammonia content.

Researchers at MBARI would like to know why the chemical properties of the ocean off our coast are changing. One potential explanation is that the California Undercurrent (CU), a northward flowing current which carries low-oxygen water from the area of the ocean known as the northeastern tropical Pacific (NETP)—the part of the Pacific off the western coast of Central America— up the west coast of North America, has grown stronger. Which means more low-oxygen (“hypoxic”) water is wending its way up the coast. 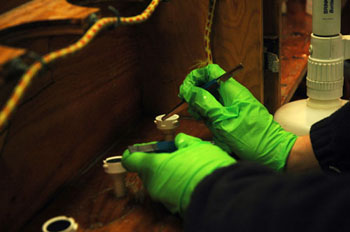 Monique Messié prepares the filtration machine for the next round of samples.

The southward transit we’re on gives us the opportunity to sample the water in the California Undercurrent flowing northward beneath us. Francisco Chavez and Tim Pennington made this same transit back in 2003, and now they’re eager to see if the composition of the CU waters has changed since then. Numbers are being are crunched from the data we’ve collected so far. So, is there less oxygen in the water than in 2003? Stay tuned…