Steaming out of the Moss Landing harbor on a ship called the Western Flyer with ROV Doc Ricketts on board and a course set for the Sea of Cortez, as an avid fan of John Steinbeck’s work, it’s fairly humbling, a good deal intimidating, and a whole lot exciting to write those words. And while I’d love to (and intended to—and can’t promise I won’t still at some point soon) muse on the historical significance, both scientific and literary, of this contemporary return of Ricketts and the Flyer to the Gulf of California, that wasn’t how this day went. Instead of gazing at the seas, laptop on knees, sifting through lazy nautical metaphors, today I learned in a hurry how to work on a research cruise.

This was the first day of the first leg of MBARI’s 12-week expedition to the Gulf of California. The science being conducted on this leg seems a fitting way to begin this cruise. It is in some ways foundational oceanography; before the whales, before the fish, before the squids, before the jellies, comes the water, and we’re looking at the water. And when you look closely (and I mean really closely) at the water, it’s amazing how much is going on in there, and how much we can learn about this planet from studying it.

This first leg of this cruise is the transit from Moss Landing to La Paz, Mexico; along the way we’ll be stopping at roughly 25 “stations”—sampling sites—to conduct conductivity, temperature, and density (CTD) casts. If you look to the right of this page, you’ll see an equipment list. On that list, just below the Western Flyer (our most important piece of equipment, for obvious reason) is the CTD rosette, our second most important piece of equipment. 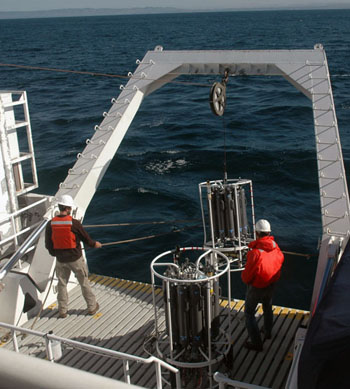 Erich Rienecker and Chris Wahl lower the CTD rosette into Monterey Bay for our first cast of the cruise.

Using the CTD rosette (whose operation I’m sure I can safely assume you understand since surely you read the equipment description I just directed you to) we’re bringing water up from a range of depths. Starting at a depth of 1,000 meters (around 3,200 feet), the Niskin bottles affixed to the rosette take samples at 100 meter intervals as the rosette is pulled back up towards the surface. When the rosette reaches 250 meters depth, the interval shortens to 50 meters. The final sample is taken just below the surface.

Things are pretty straightforward up to this point, but once Erich Rienecker and Chris Wahl fasten the rosette to the rear deck, things quickly get a lot more complicated. Boxes of bottles, vials, flasks, and ampules show up, and the rosette is swarmed by scientists eager to draw the water from the Niskin bottles for their experiments. The water in the Niskins will be analyzed for nutrients, chlorophyll, carbon, oxygen, ammonia, and carbon dioxide levels; its alkalinity and salinity will be measured; it will be strained for phytoplankton DNA. 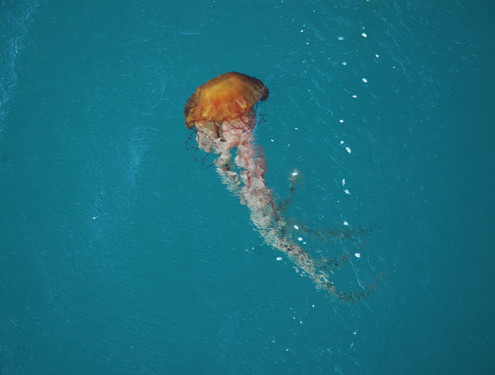 A jelly floats by near the surface of the water as the Flyer sits on station during a CTD cast.

From all these disparate tests and measurements, we can then reconstruct the whole. The result is a fairly robust profile of this area of ocean. This is the nuts and bolts of oceanography: the chemical composition and processes of the ocean. This is the stuff we need to know if we’re going to really understand anything else about the ocean.

It’s 10:30 p.m., we’ve hit three stations and made four casts already today, and we’ll be arriving at the next station in about a half hour for another 1,000 meter sampling cast. And I’m told this is actually a slow day for this research group.

I know, another expedition sunset picture. Sorry, but it was my first sunset at sea!