Day 9: Behind the scenes

There are 26 people onboard the R/V Western Flyer. Ten of us are on the science team, but there are many others who help to make things run around here. With that many people working in tight quarters, it is important that everybody works together and this cruise has been a good example of just that. We have been fortunate to have very successful and smooth operations (ROV dives, blue-water diving, trawling, camera deployments) thanks to a strong and hard-working crew. 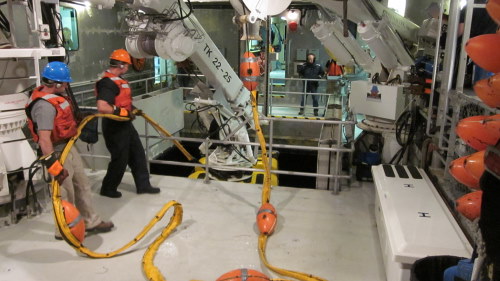 Crew members Cole Davis and Jason Jordan hoist up the tether during an ROV recovery as the pilots watch the vehicle come up through the moon pool.

From ROV pilot Ben Erwin: Gathering samples for the scientists can be a very daunting and stressful task for an ROV pilot, but it can also be very fun. Catching a critter in these samplers can be tricky. The pilots must consider the ROV heading in relation to any currents, the position of the umbilical tether, any terrain or other physical obstacles, even the wash from their own thrusters, all of these things, while also tracking and lining up the target with the sampler. 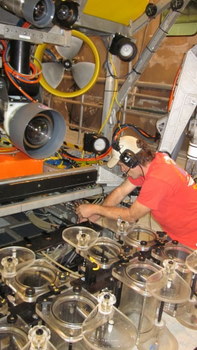 During midwater and benthic biological expeditions, ROV Doc Ricketts has a number of tools with which the ROV pilots can collect samples intact, and bring them safely back to the surface. The twelve “D-samplers” (or detritus samplers) are acrylic tubes with moveable lids, which can be hydraulically actuated to close by the pilot.

Doc Rickett’s suction sampler can be extended out in front of the ROV, and used to catch some of the more difficult targets, like squid, that sometimes swim away or even attack the samplers. Target animals get sucked through a long tube to the sample carousel, where they are stored in containers that can be indexed forwards and backwards to accept new samples. Doc Rickettshas two hydraulic manipulator arms. These arms are incredibly powerful tools for an ROV pilot. They can be precisely controlled via the control room through devices called masters. These masters are basically small representations of the manipulators on the ROV and proportionally control each of the corresponding joints. When catching animals, these arms are far too powerful to safely collect the target intact, so the pilots use “The Spatulator.” This incredibly expensive and technologically advanced kitchen spatula with a short bit of rope on the end is used to scrape or lift animal samples up off the seafloor so that “the Schnozz” can suck them up. 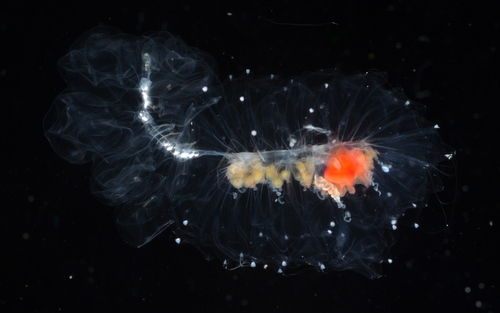 Steve Haddock was excited today to collect a beautiful siphonophore called Resomia dunni that he has only sampled three times before. This animal was collected with the ROV at 1,035 meters deep (3,415 feet) using a D-sampler. Steve and Phil Pugh first described this animal and they named it for a colleague, Casey Dunn. 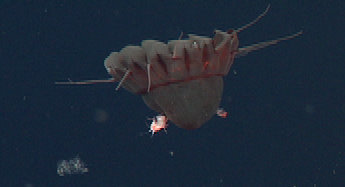 Nausithoe carrying two hyperiid amphipod hitchhikers. Pelagic amphipods are known to lay their eggs on or inside a jelly. They may even eat their medusa host.

We also caught a medusa for Rebeca because we observed two amphipods attached to it. After the dive when we emptied the sampler we only found one of the amphipods, but it turned out to be Hyperoche shihi, a species that Rebeca described in 2003, based on samples from her participation in MBARI’s previous expedition to Mexico, and named after one of her mentors, Chang-tai Shih. The specimen we caught today was a male and the one she found in 2003 was a gravid female.

Karen saw three different species of enteropneusts on the seafloor today and Erik collected many interesting chaetognaths in the benthic boundary layer, so they were very busy after the dive. Unfortunately we did not see many squids today, but we did collect another small Planctoteuthis, and tomorrow is another day. 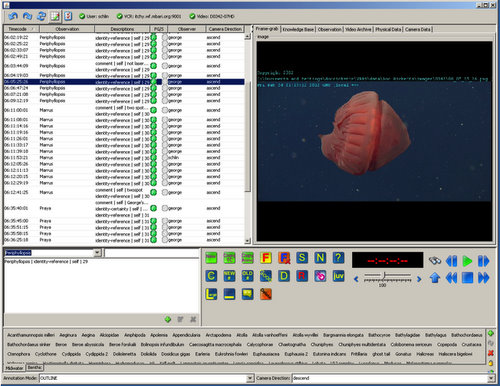 Image of MBARI’s Video Annotation and Reference System (VARS) software. VARS allows the scientists to easily access information about the animals observed and collected during the research expedition.