Day 8: Looking at the big picture 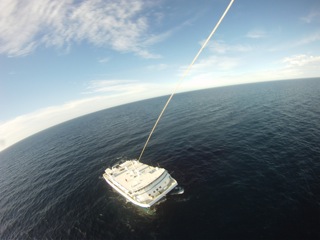 Although you often hear that the ocean represents two-thirds of the planet, it is actually much, much more. Because of its depth, the volume of available living space in the sea dwarfs that of familiar terrestrial environments, so that well over 90 percent of available space on the planet is in the deep ocean. Despite its significance, this habitat is rarely studied, and many basic questions remain.

One thing that we have learned through decades of deep submersible work is that gelatinous organisms serve key roles and can transform the environment. Jelly-like plankton use a wide range of feeding specializations to survive in the ocean. Some called salps and larvaceans can filter out microscopic cells; others eat bug-like crustaceans, and some even eat other jellies. These jelly “top predators” include the ctenophore Beroe and funny-looking jellies called narcomedusae, which swim with their tentacles in front of them, hoping to snag other jellies by their tentacles.

The irony is that these fascinating organisms are incredibly abundant (because they occur throughout vast spaces), yet they are also almost totally unknown. Many of them are less substantial than a wet tissue or piece of jello, so they can be impossible to study except with remotely operated vehicles (ROVs). As a result, we are continually finding undescribed species. These are not just animals that are different by a whisker, but they are often entirely new families of animals. On this cruise we have had to make up a new batch of placeholder names (like the “Brick Red Diamond” comb jelly) for some of the creatures we have seen. A true assessment of marine biodiversity is clearly dependent on discovering and studying these groups, even if they seem obscure and exotic. 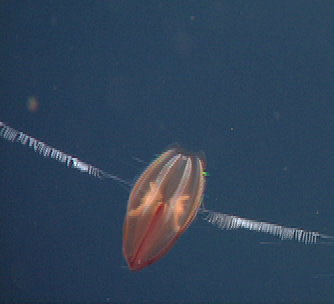 When a species is undescribed we often give it a placeholder name like the “Brick Red Diamond” comb jelly.

At MBARI, we spend a lot of time exploring and studying life in the waters off the California coast. This cruise and the international team of experts aboard provide a great opportunity to compare our image of the “normal” deep sea, and see what is different and what we might be able to generalize to the global ocean. Because the Gulf of California is a rather extreme environment, we can also use observations here to predict how ecosystems might be affected if the ocean becomes more stratified or if low-oxygen zones became more intense.

We have seen a few different patterns regarding the distribution of organisms here in the Gulf. Vertically, the water column is dramatically stratified, meaning that it is divided into discrete physical layers. As the ROV descends, and even during SCUBA dives covering only the upper 25 meters, we see organisms in very high concentrations across a narrow depth range. They have sorted themselves into their preferred microhabitat, whether based on temperature, oxygen, light levels, nutrients, competition, or predation.

Another trend we have seen is that horizontally, the environment is very dynamic. Winds, tides, currents, and animal behavior help swirl and mix communities across space, so the ROV can see different things on the way down than on the way up. When we have conducted blue-water dives twice in the same geographical location, the organisms present can be completely different. Two days ago, the waters above Pescadero Basin were full of ctenophores and salps, but today our dive near the same spot was a soup of different species of pelagic snails. On yesterday’s SCUBA dive at our more northern location, we saw exactly one animal in the water—not even copepods, which are the bugs of the sea. Fortunately the siphonophore that we did see was of interest to us because of its intense fluorescence. 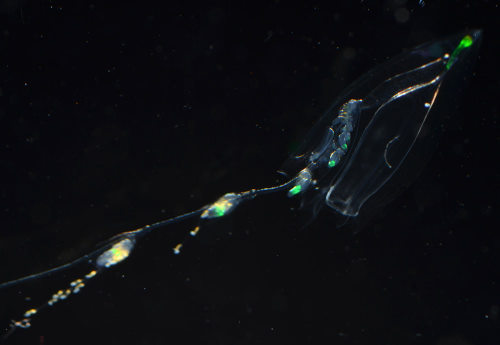 This calycophoran siphonophore was collected on several of our blue-water dives. Steve Haddock and Meghan Powers viewed it in the lab and observed brilliant fluorescence. Photo by Steve Haddock.

How do deep-sea animals find each other and how do they communicate? One of the most effective ways is by making light, through a process called bioluminescence. Although this ability seems like science fiction to us, it is actually very common in the ocean, and nearly all of the medusae, comb jellies, and siphonophores we have collected, not to mention the fish, squid, and shrimp, are able to make their own light.

Animals use this “super-power” as a way find mates, defend against predators, and attract food. Siphonophores in the genus Erenna, which use glowing lures to attract small fish, have been extremely abundant on this trip, and we have seen one or two species on every dive.

Fluorescence is a tool we can use to study bioluminescence. When we shine a blue light on an organism, some chemicals inside of them, including light-emitting bioluminescent chemicals, can be excited to show green or even red fluorescence emissions. We can also sometimes use these fluorescent signals to reveal dietary linkages. Solmundella is one of the jelly-eating narcomedusae mentioned above. Photographing under fluorescent conditions revealed that the last prey item in its flower-shaped stomach contained fluorescent proteins, and we can confirm this by measuring the emission spectrum—the precise color of the light. We can also do fluorescence surveys with the ROV using special LED lights to discover novel fluorescent patterns. 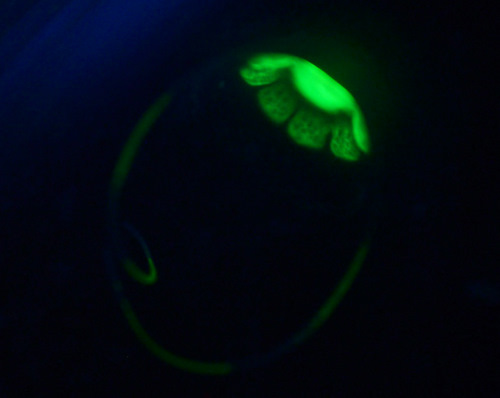 Solmundella, a narcomedusa, exhibits vivid fluorescence when viewed in the lab under blue light. Photo by Steve Haddock. 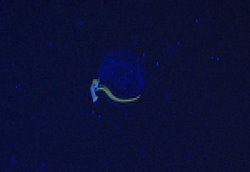 When the ROV shines blue light on this frittilarid larvacean it displays bright fluorescence.

After the cruise ends, organisms seen on each dive will be quantified by Video Lab experts, including Kyra Schlining, with corroboration based on DNA analyses and the ship- and lab-based identification of collected specimens. This rich data set will provide the basis for comparison with the communities of the Eastern Pacific, as well as correlations with physical measurements of the water column and the physiological data that Erik Thuesen is collecting.

Using high-tech tools is one way to monitor the ocean. Another way is to have many eyes watching and gathering data. This citizen-science approach is what we are trying to use to monitor global jellyfish trends, through the web site and database jellywatch.org. 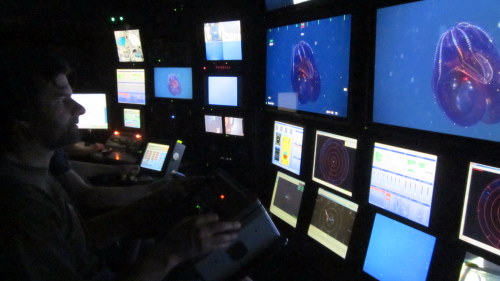 All of these means are necessary to improve our understanding of life in the ocean. We and the little ‘Brick Red Diamond’ ctenophore are all linked by our dependence on a healthy ocean, from its surface to its greatest depths.