This morning after collecting five small Abraliopsis squid for Henk-Jan Hoving and Stephanie Bush, the remotely operated vehicle (ROV) was descending past 850 meters (2,800 feet) when several of the samplers malfunctioned. To fix them, we had to recover the vehicle, which is a pretty large effort for all the ROV pilots and ship’s crew. Luckily, our pilots are almost always able to diagnose and fix the problem right on the ship. By 9:30 a.m. the ROV was ready to relaunch and we continued our dive down to 2,000 meters at another location close to Alarcón Seamount. 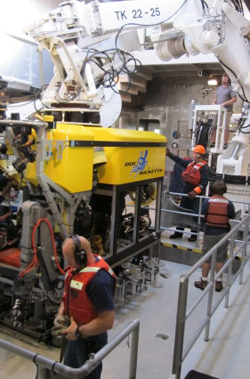 ROV pilots, Knute Brekke and Randy Prickett, work with the ship’s crew Andrew McKee and Olin Jordan to relaunch the ROV. All the pilots and crew are needed to assist during the daily launches and recoveries.

We noted a relatively greater abundance of animals as we passed through the upper 200 meters (656 feet) of water this morning than on previous dives, including a large assortment of comb jellies, or ctenophores, which means a very busy day for Erik Thuesen. Erik was the first scientist up this morning, by far. His alarm was set for 2:00 a.m. to run some oxygen consumption experiments as part of a larger effort to understand the biodiversity of this group of jellies. 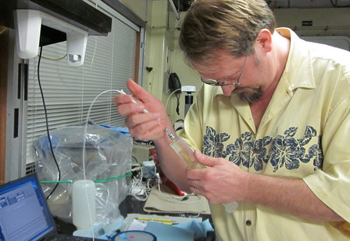 From Erik Thuesen: Many ctenophores are extremely fragile and need to be collected by hand, either by the human hands of scuba divers or the robotic “hands” of the ROV. Some species are so fragile that very little research can be done on them because they dissolve into pieces once they are held in a container for any length of time. But using very careful collection techniques, we are able to get specimens of many species in excellent condition.

I’m investigating the diversity of metabolic characteristics of ctenophores by measuring their oxygen consumption rates and activities of metabolic enzymes. In order to measure oxygen consumption, I place the animals into small chambers and keep them for a day or so while I measure the oxygen levels in the chambers using a fiber-optic oxygen probe. Glass syringes make great chambers, because they come in lots of sizes and allow me to customize the chamber size to the shape and size of the animal. I’m running experiments around the clock, 24 hours a day, so I often have to wake up in the early hours to check on the animals. Being on an oceanographic research expedition isn’t anything like being on a pleasure cruise. 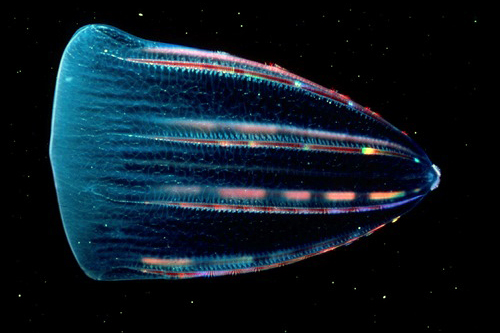 Steve Haddock and I hope to combine studies of metabolic diversity, locomotory capabilities, bioluminescence, and DNA to piece together an overall view of the evolution of these beautiful animals. Most ctenophores use their rows of cilia (tiny hair-like projections) to swim elegantly through the water, and actually they are the largest animals on the planet to move using cilia. However, some of them swim by flapping lobes and “flying” through the water or jetting around like jellyfish. These animals live all throughout the oceans from the floor of the deep sea to tropical surface waters to polar waters.

I’ve previously investigated ctenophores that live in estuarine hypoxia (very low oxygen waters) and one neat aspect of the Gulf of California is that the oxygen goes practically to zero in the midwater oxygen minimum zone. Some ctenophores can survive for many hours at zero oxygen and others die immediately. I hope to learn more about how ctenophores can live at extremely low oxygen levels by studying their metabolic enzymes, so I am also freezing lots of specimens from this research expedition in liquid nitrogen for later analyses back on shore. 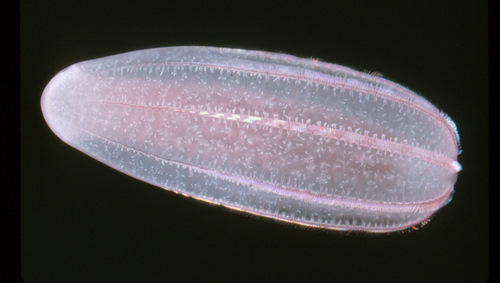 Some other projects that I’m working on during this cruise include measuring oxygen consumption of surface copepods that use vision, such as the sparkly copepods called Sapphirina. I hope to test the idea that these copepods with eyes may have higher metabolic rates than the majority of copepods (that don’t use vision). I’m also collecting specimens of undescribed species of deep-sea arrow worms (chaetognaths). We’ve already found a very rare one that is the same species we found previously in Monterey Canyon. 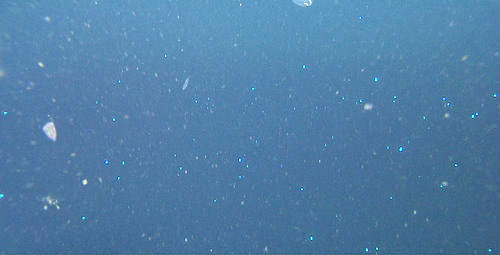 ROV frame grab of the sparkling layer of Sapphirina copepods at about 40 meters (130 feet). The triangular animal on the left is a Beroe forskalii. 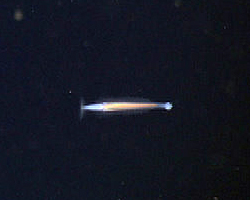 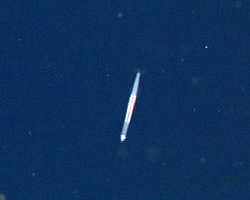