The water today at our dive site just off Alarcón Seamount was crystal clear blue; beautiful to look at, but also indicating that there was a lower abundance of animals for our blue-water divers. The remotely operated vehicle (ROV) dive brought its own excitement, and the sub was recovered with 23 out of 24 samplers full—some with three or more specimens inside—after a busy 12-hour dive. 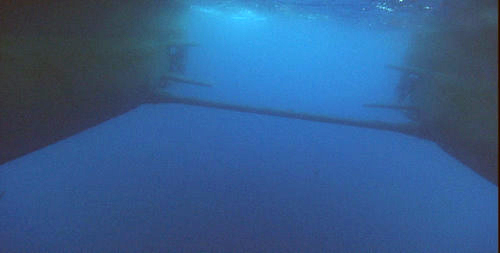 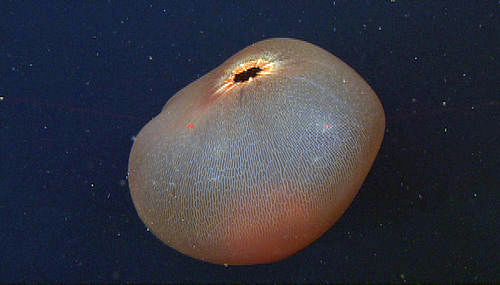 Measuring the large medusa, Deepstaria, using lasers on the ROV. The lasers are 29 centimeters apart. This jelly was too big to collect with the ROV samplers.

After dinner was over and the ROV was back on board and unloaded, the action on the ship did not stop. Each night, with assistance from the ship’s crew, Meghan Powers, a Ph.D. student working in Steve Haddock’s lab, oversees the deployment of a large midwater trawl net. It can take an hour or more for the net to reach depth (trawls are deployed at depths from 50 to 3,000 meters). Once the net is down, Meghan opens it by sending a “messenger”—a brass weight that triggers the spring-loaded mechanism. Then the net is towed for two hours, a closing messenger is sent, and the net is hauled back up to the surface—which can take another two hours. This process, coming after a full day of ROV and scuba diving, makes for very late nights sorting zooplankton. 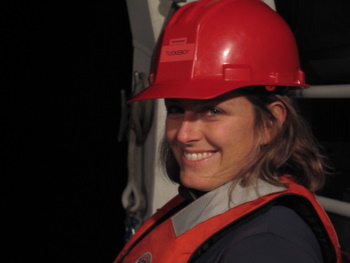 From Meghan Powers: On this cruise I’m interested in collecting many different groups of bioluminescent organisms like ctenophores, cephalopods, and radiolarians. My research is focused on identifying the genes involved in luminescence within these organisms to better understand the evolution of bioluminescence in the ocean. I use molecular techniques to sequence the DNA from the luminescent organs of these animals. Many animals of interest, especially ctenophores, are gelatinous and often fragile, so we collect those specimens with the ROV. However, we also use a net called a Tucker trawl to collect midwater organisms that can withstand more force. We deploy this two-square-meters net off the stern of the boat and as we tow it slowly through the water, animals are filtered into a plastic tube at the end of the net that we empty on deck. I’m interested in collecting a species of squid called Pterygioteuthis that migrates up closer to the surface at night to feed on prey. These squid are bioluminescent and have light organs called photophores along their mantle and eyes. While we haven’t seen any in the trawls yet, I’m optimistic we will find them since we have collected them consistently in this area in the past. We have collected many other animals with the trawl, including pteropods (pelagic snails), marine worms called polychaetes, and luminescent crustaceans like ostracods and copepods. 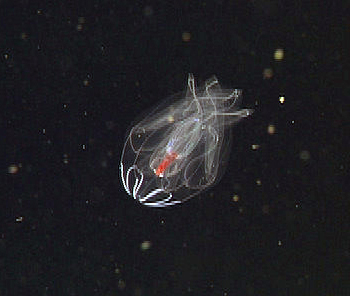 The ctenophore, Bathocyroe, is one of the animals Meghan Powers has been studying.

While Meghan, unfortunately, has not yet found her target animals in the trawls, several of the other scientists on board have been able to use the majority of the trawl catch for their research. Erik Thuesen is doing respiration experiments as part of a collaborative project with Steve Haddock looking at the physiology and biodiversity of jellies — how they come to occupy many ecological niches in the vast and seemingly featureless deep sea. More on Erik’s research tomorrow… 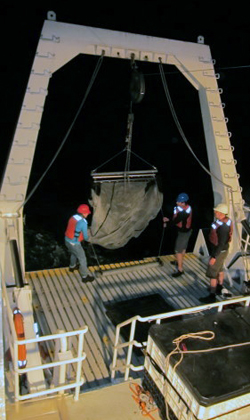 Meghan Powers, Steve Haddock, and Henk-Jan Hoving deploy the Tucker trawl off the stern of the Western Flyer. 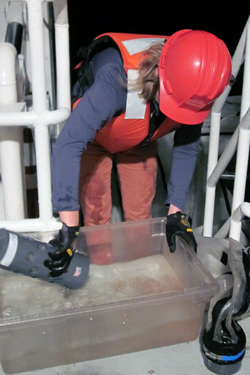 Meghan Powers empties a bounty of zooplankton from the trawl bucket. 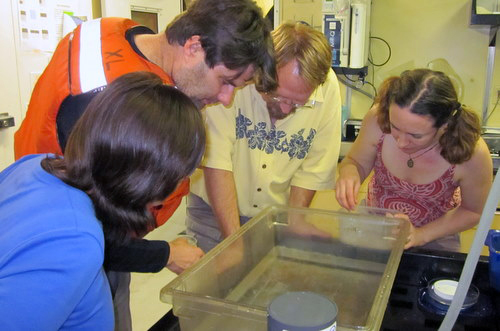 Rebeca Gasca, Steve Haddock, Erik Thuesen, and Karen Osborn are eagerly waiting in the lab to sort through the trawl. 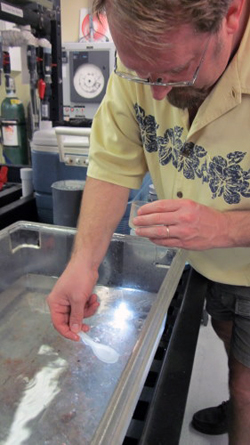 Erik Thuesen scoops out tiny ctenophores (comb jellies) to use for his respiration experiments.