We launched the ROV at 7:00 a.m. this morning with plans to do two ROV dives today but we had to pass on the scuba diving due to high winds and choppy seas. When the ROV reached the bottom on its first dive at 1,500 meters (5,000 feet) we immediately came across something very peculiar. It took us a few minutes of observations to figure out what it was, but it was a tube worm hoisting itself across the surface of the sediment with its mouth parts. The tube was about 45 centimeters (18 inches) long and it looked like it took a large amount of effort for the animal to drag itself over the seafloor. We collected this specimen for our worm expert, Karen Osborn, to identify in the lab on the ship. 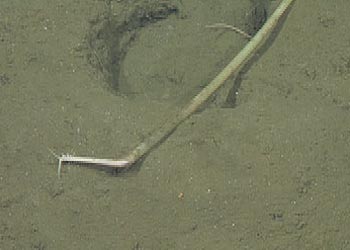 The tube worm (from the family Onuphidae) on the seafloor. 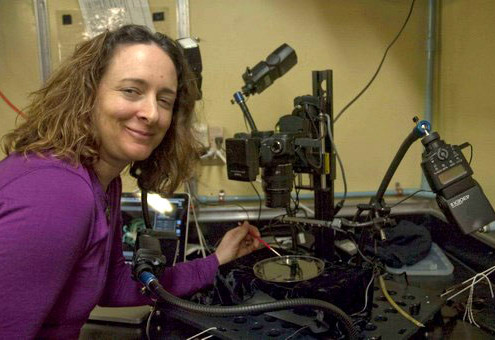 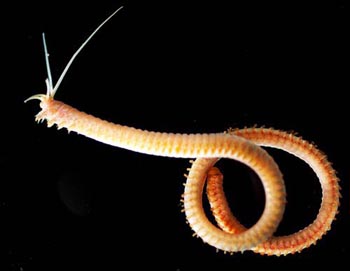 The tube worm photographed in the lab out of its tube. Photo by Karen Osborn

We also collected a segmented worm from the benthic boundary layer, which is the layer of water directly above the seafloor. This region is especially interesting to researchers like Karen because of increased levels of biomass and diversity due to the overlapping habitats of the seafloor and the water column. The worm turned out to be one within the group that Karen and her colleagues have recently been doing phylogenic studies on.

From Karen Osborn: Today we spotted a beautiful deep-sea worm we call Spanish dancer or “Juanita” because of their elaborate head appendages and the way they flow back and forth when the animal swims. This genus was first discovered above the Juan de Fuca Ridge by MBARI scientists in 2005. A second species belonging to the genus was found off California in December 2011 and today we found the first reproductive specimen here in the Gulf of California. The worms belong to the group that includes the “bomber” worms described in a recent paper in the Zoological Journal of the Linnean Society. These worms are interesting because they represent a whole group of fairly large worms that, until just a few years ago, were completely unknown to science because they swim in deep water within about 100 meters of the seafloor. This is a very difficult area of the ocean to sample and thus many unknown creatures are found here. 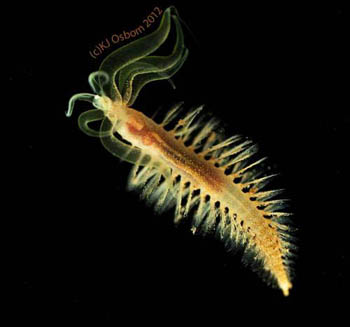 The Spanish dancer or “Juanita” worm photographed in the lab. Photo by Karen Osborn.

During our second dive we searched the waters from depths of 500 meters (1,600 feet) to 200 meters (650 feet) for animals that live within the oxygen minimum zone, which is much wider and more pronounced in the Gulf of California than off the coast of central California. This expedition offers us a peek at what a potential future ocean—warmer and therefore decreased levels of dissolved oxygen—might hold. 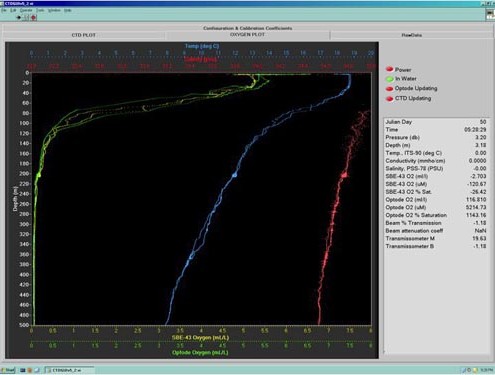 Discouragingly, we saw very few animals at all. No jellyfish, not even copepods. We were recording oxygen saturation levels of less than one percent for much of the dive spotting just the occasional fish swimming by here and there but little else. The only animals we noted in greater abundance were tiny, shelled pteropods (sea butterflies) called Clio. Once the submersible ascended above 200 meters (650 feet) we began to see more shrimp, jellies, squid, and other animals join in the mix. 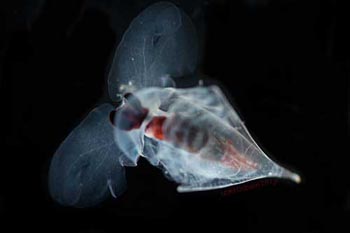 Tonight we will trawl, then tie everything down and head south to dive at a site near Alarcón Seamount. Stay tuned to see whether our scuba divers will be able to get in the water tomorrow.