Just after 2:00 this morning, the CTD took a 3,000 meter plunge into the Pacific at “GOC2,”—21°N on line P18 (don’t worry, I’m not going to talk about lines again)—our southernmost station of this cruise. After steaming all day, we passed the Sierra de la Laguna again, however this time it was to our west as we entered the Gulf of California. 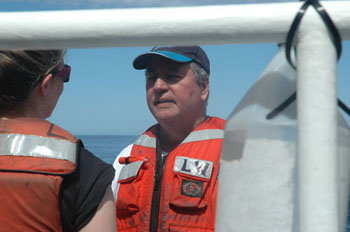 Chief scientist Francisco Chavez converses with Marguerite Blum on the well deck during a CTD cast.

After a few hours of sleep, this morning I tardily meandered onto the galley 10 minutes too late for breakfast. Fortunately, ship steward Patrick Mitts mercifully consented to “look the other way” while I loaded my plate with modest servings of eggs and potatoes followed by an exorbitant assemblage of breakfast meats. I sat down to eat at a table with Carmen Castro and Martín Hernández Ayón, our collaborators from Spain and Mexico respectively, and Haibin Zhang, an MBARI postdoc from China. Monique Messié, a research assistant from France, came down for breakfast later than I, but Patrick was feeling magnanimous, and she, too, was allowed a late meal. Francisco Chavez, our chief scientist and a native of Peru, came over to the table to discuss packing logistics with Haibin. 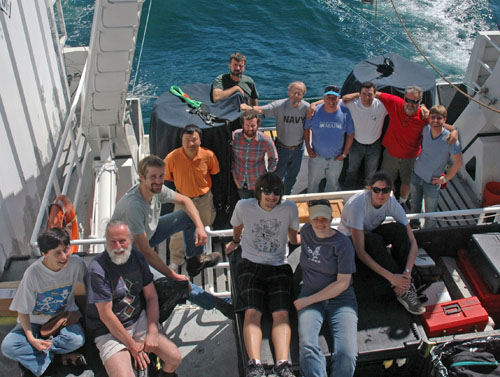 The point of this vignette is to illustrate is that this research vessel is quite the global village; the researchers on this team originate from seven different countries—the U.S., Peru, Germany, France, Spain, Mexico, and China. And the larger point that this point is meant to illustrate is that oceanography is an international endeavor. Francisco offers up the adage that the ocean’s organisms and processes don’t recognize political boundaries—it doesn’t make sense to study your own part of the ocean. Currents have ambiguous beginnings and flow across borders.

Francisco, whose work has taken him to over 50 countries, observes that having a multi-national research team not only makes the work more interesting, but produces better results. When you assemble folks from different countries, you have the advantage of multiple perspectives informed by diverse educational and cultural backgrounds.

This principle is evident in the team assembled for this cruise. Gernot Friederich, who was born in Germany, has worked at MBARI since it was founded 25 years ago. In that time he’s traveled from the Arctic to South America and points in between. Over the course of his career as an oceanographer he’s been on vessels trapped in the ice north of Greenland to stations off the coast of Tanzania.

Martín Hernández Ayón: My collaboration with Francisco Chavez and Gernot Friederich started six years ago, first related to pCO2 buoys, then a dissolved inorganic carbon instrument development, and now, the biogeochemistry topics related to the California Current System and the oxygen minimum zone along the Mexican Coast. In the summer of 2006 my Ph.D. student Lorena Linacre and I met Francisco at the Centro de Investigación Científica y de Educación Superior de Ensenada (CICESE). That day, we had a very nice academic talk before and after a seafood dinner. Since then, we have remained in touch regarding pCO2 measurements, scientific meetings, workshops, and proposals, and now we are working together in our first oceanographic cruise.

Monique Messié: I met Francisco when he gave a seminar in Toulouse where I was doing my Ph.D. at Laboratoire d’Etudes en Géophysique et Océanographie Spatiales (LEGOS ). Francisco offered me a position working on a project regarding anchovies off Peru (the FAST project). I liked it so much that I am still here almost five years later, working in the Biological Ocean Group as a research associate.

Haibin Zhang: I come from Qingdao, a beautiful city in the east coast of China. I became very interested in marine science when I was very young. All kinds of marine life are so attractive to me. After I got my Ph.D. in marine biology from Institute of Oceanology, Chinese Academy of Sciences, I came to the U.S. to continue my study, first at Cornell University, then at Louisiana State University. While at Cornell I met Bob Vrijenhoek, a senior scientist at MBARI. I am now working in the molecular ecology and evolution group at MBARI.

Carmen Castro: Dana wants to know how I arrived here from some far away corner of the world that is facing the Atlantic; enduring a 12-hours flight, jumping the Atlantic and arriving at the Pacific. It happened more than nine years ago when Francisco invited me to come along on the Gulf of California 2003 cruise. I immediately grabbed the opportunity of going back to California, where I had enjoyed my postdoc period at MBARI and NPS (Naval Postgraduate School) under the supervision of Francisco and Curt Collins; such a great experience. During the 2003 cruise, we were tracking the California Undercurrent along the coast bound for Cabo San Lucas. I was in charge of collecting samples for total organic carbon (TOC) to have a first picture of its distribution along this eastern boundary. And now here I am, sealing ampule after ampule of TOC at a rosette pace sometimes slow, sometimes rushed. Nine years later, all the data we are collecting is giving us a new picture of the California Undercurrent under these oxygen-declining conditions that we are trying to understand. 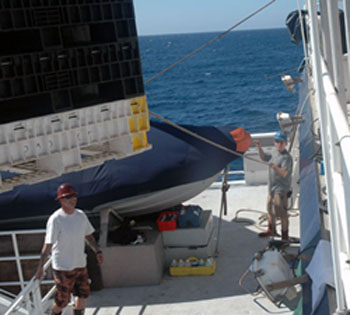 Time to start packing up. First mate Andrew McKee and Able bodied seaman Craig Heihn bring our storage bins down from the roof of the Western Flyer.

Our last CTD of the cruise was last night around 1:00 a.m. Their job complete, the CTD and sample bottles can take some time off to relax on the aft deck.

And now we arrived at a foreign port, Puerto de Pichilingue, just outside of La Paz, Mexico. A journey that started with observations made about the ocean in the Monterey Bay, and took us more than 1,500 kilometers to the south following the trail of the California Undercurrent.