A few days back, Jason Smith, a graduate student at Stanford University who’s done a few of these longer expeditions, commented that a research cruise is a lot like the classic Bill Murray movie Groundhog Day—you keep living the same day over and over again, and you can’t leave, so all you can do is try to do a better job each day. So goes Day 8: pre-dawn CTD cast, the increasingly rapid cyclonic circulation of samplers round the rosette, another spectacular sunrise, on to the next station. 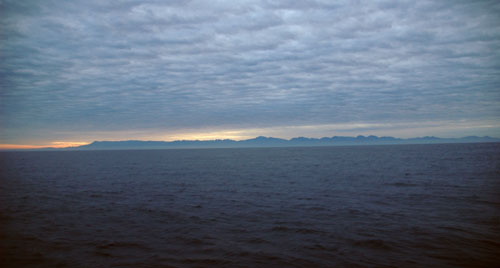 The Sierra de la Laguna rises out of the morning mist at the southern tip of Baja California.

The next station, which we arrived at before noon, was on “line P18.” The creatively named P18—the “P” stands for Pacific—is a line of study designated by the World Ocean Circulation Experiment (WOCE), a multi-national research project organized to observe the physical processes of the ocean. P18 runs due south down the 110 degrees West longitudinal line from Baja California all the way to Antarctica. We’ll make three sampling stations along our transit down P18 from 22°N to 21°N—one degree is 60 nautical miles, which is about 110 kilometers—before reversing course and heading back to La Paz in the Gulf of California.

This strategy of drawing lines out into the ocean and then repeatedly sampling along them is an incredibly effective way to study the circulation of waters around the ocean basins. At this point I imagine you’re thinking, “Is he really going to keep talking about lines?” And I can see why a discussion on geometric figures formed by points moving along a fixed direction might be slightly less than captivating. But please bear with me, when we get to the part about what crosses the lines and, better still, how we know what “it” is, you’ll be glad you stayed. 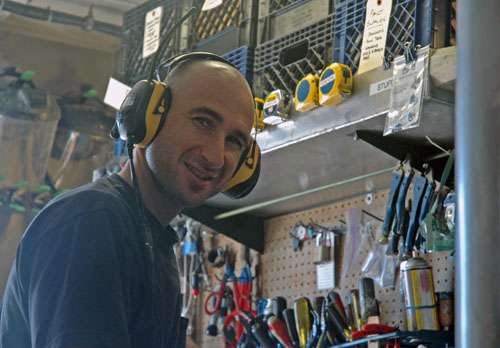 Second mate Paul Ban doing his “ship work”—the work he does when he’s not steering the vessel. It’s business only in those headphones. I can assure you he’s absolutely not listening to the Misfits.

If you’ve been reading these logs closely-which I think is the best way to read them, though I might have a bias—you may have noticed I keep using the word “waters” (as opposed to water, singular). This plural usage isn’t just idiomatic; oceanographers refer to distinctive masses of water in the larger ocean, for example “sub-tropical sub-surface waters” or “Gulf of California waters.” But how can one tell one water apart from another? As it turns out, when water is at the ocean’s surface, and therefore able to exchange gases with the air, it acquires a very specific set of salinity and temperature characteristics that allow oceanographers to track it. (Spookier even, is water that happened to be at the surface in the 1940s can be tracked by the residual fallout from exploded atomic bombs.)

So now that we know how to track water masses, the next question is how these masses get to moving. The most significant currents are wind generated. The California Current, which flows towards the equator from the pole down the western coast of North America, and is part of the larger North Pacific Gyre, is one such current. The California Undercurrent (CU)—also referred to as the Davidson Current when it surfaces in the winter, and the current we’ve been studying—is different. The wind does have an effect on the CU, but its effect is predominantly on how deep or shallow the CU is. What drives the CU is pressure—the waters in the CU effectively run downhill.

To grossly (but not erroneously) oversimplify the process, water in the north is colder, and therefore denser than the warmer southern waters. So, it takes more warm water to equalize the pressure of the cold northern water, and water basically “stacks up” higher in the south. Up at the top of this “pile” of water, the pressure is greater in the south, so the water flows downhill to the north. The sketch below that Curt Collins drew of a manometer helped clarify the point for me. And so the water starts slowly rolling its way up the coast; by Curt’s rough calculations it takes water around one to two years to get from the tip of the Baja peninsula up to the Monterey Bay. 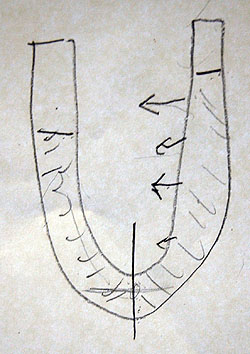 Curt Collins sketched this manometer to illustrate the pressure gradient between northern and southern waters along the eastern Pacific boundary. The right, shorter, column represents the colder, denser water in the north. 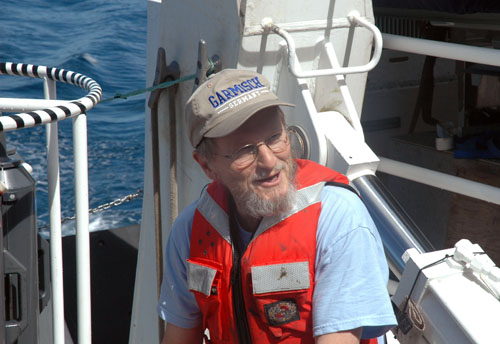 We’ll reach our southern-most destination tonight sometime after midnight. After that we’ll likely only have two or three sampling stations before pulling into port. Tonight’s sunset ordained Chris Wahl as witness to the green flash, and with only one more at-sea sunset left, everyone’s sure to be lined up on the deck this evening for one last chance to glimpse the elusive flash.

A satisfactory consolation for missing the green flash..