Let me begin today’s log with a correction. Yesterday, I mistakenly told you that the day began early. As it turns out, 6:30 a.m. isn’t actually early at sea. Today our first CTD cast was at 4:30 a.m.—actually, technically, the first cast of the day was even earlier—at 1:30 a.m.—but since the crew that handled that one just stayed up until that time, I’m going to consider that one the last cast of the previous day. As I mentioned a couple of wake-then-sleep times ago, what constitutes a “day” out here is an ambiguous matter; trying to divvy up days is a little like trying to slice a loaf of water.

Setting the alarm clock for 3:30 a.m. isn’t on the top of my list of favorite things to do, but down here at 25° North the weather is balmy, and being out on deck at that time provides the opportunity to see yet another spectacular sunrise. Our Mexican collaborator, Martin Hernandez-Ayon, caught a glimpse of the illusory sunrise “green flash.” Shortly thereafter, with the CTD back on deck and our water samples and filters safely stowed in the freezer, first mate Andrew McKee radioed down to the deck to tell us a pod of whales had been spotted off the port bow. Early bird, meet the worm. 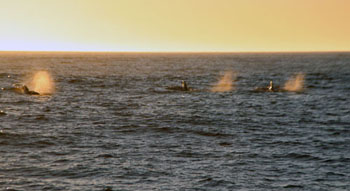 A pod of pilot whales swims by off the port bow. Photo: Monique Messié

We arrived at our second sampling station of the day around 1:30 p.m. At each sampling station, prior to dunking the CTDs, Haibin Zhang, an MBARI postdoc working in Bob Vrijenhoek’s molecular ecology group, also conducts a plankton tow. A plankton tow is pretty much exactly what it sounds like—the ship tows a net scooping up all the zooplankton in its path. 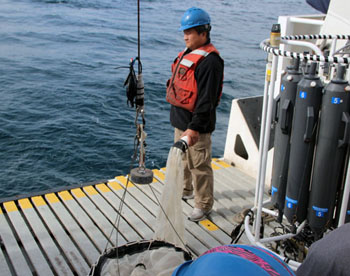 Haibin Zhang stands on the well deck in anticipation of his plankton tow. Photo: Monique Messié 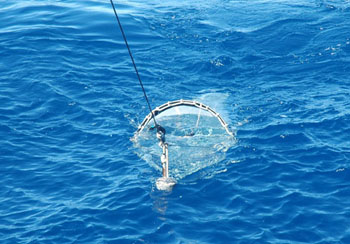 The plankton net skims the surface of the water as it is pulled back on to the ship.

It would appear that the sampling is going well for Haibin. After nearly every tow, Haibin saunters across the deck with his plastic tub teeming with zooplankton and a huge grin on his face. Haibin will filter these tiny creatures from the seawater and then examine and photograph them under the microscope. 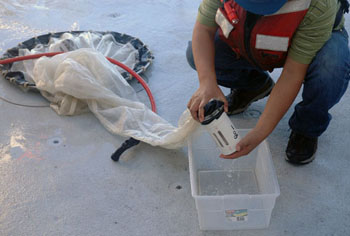 Haibin empties the “cod-end” of the plankton tow into a plastic tub. Copepods are sometimes called “net plankton” because they are (unfortunately for them) large enough to be captured with a net like Haibin’s. 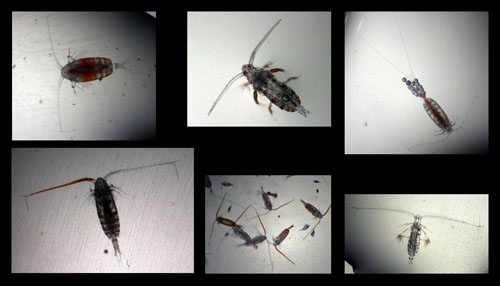 Copepods, tiny crustaceans that are one of the most abundant animals on Earth.

We’re nearing the tip of the Baja peninsula, and will cross the Tropic of Cancer sometime tonight. Some of us are off to our keeps now to sleep for a bit before the next CTD cast tonight/tomorrow at 2:30 a.m. I may be issuing another correction tomorrow morning, further revising the definition of “early.” 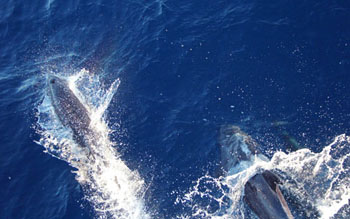 A more affable gang of dolphins came by to play off the bow of the ship. Photo: Monique Messié