Day 10: Rare rocks on the rise

We definitely saved the best, or strangest, for last today. After much discussion and hashing out dive plans over and over we chose to go back to the silica-rich volcanic unit in the northern part of the ridge axis. What caused us to make this change? Detailed examination of a small sample of ash (glassy volcanic sand) we collected three days ago revealed an abundance of frothy, bubble-rich grains, some having exotic chunks embedded within them. All in all, this sample contained a huge variety of particles that really got us excited, in light of the fact that this type of material is rarely, if ever, described from mid-ocean ridges.

Mid-ocean ridges are dominated by silica-poor rocks, namely basalt. The silica-rich rocks that have been described from mid-ocean ridges are typically found in deep drill holes or in rare uplifted portions of the lower oceanic crust. They generally form way below the ocean seafloor as the final “crud” left over after all the silica-poor rocks have been formed, and do not get to erupt to form volcanic rocks. In addition to high silica contents, silicic volcanic rocks commonly have high gas contents, which cause the largest and most dangerous eruptions on land. So we thought it would be a good idea to get back to the silicic volcanic unit on Alarcón Rise and sample it in detail to better understand how these strange rocks and ash deposits form along mid-ocean ridges.

Although we had a very detailed one-meter resolution map of the area we dove on today, the extremely rugged nature of the silicic-complex proved to be very challenging to navigate through. The remotely operated vehicle flew a very sinuous course to cover the area in detail, going up and down very steep valleys, across knife-like ridges, and around the headwalls of bowl-shaped features. To give you an idea, our mapping autonomous underwater vehicle (AUV) crashed two times in this area trying to get through it, despite only crashing once before on many, many dives. One area on the map where the AUV crashed left a big, blank gap in the data. We traversed this “data-hole of no return” to find a vertical wall tens of meters high. Our very skilled ROV pilot team was continually checking our position relative to the boat to make sure our tether did not drag over the top of these vertical scarps. It would be analogous to climbing and navigating through a glaciated high alpine terrain in a snow storm with a flashlight and having your partner attached to you on a rope. 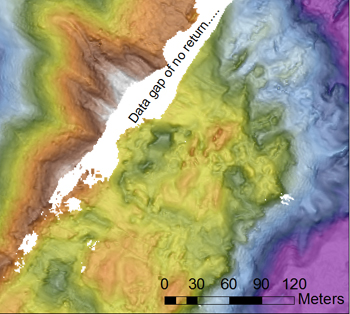 Map of AUV survey of the silicic dome, showing the large white data gap that was a shear cliff several meters high.

Our extensive sample collection that we gathered during the dive confirmed our suspicions that this complex was indeed silicic. Time will tell when the rocks are analyzed in the lab. Much work is yet to be done on these very interesting and rare rocks. How do they form deep below the surface? How explosive were their eruptions? What style of particle dispersal did they have? You would not want to have been there when this place was active. Boulders and blocks the size of cars and small houses were not uncommon. The slopes were littered with gravelly debris that would have been deposited via large avalanche-like deposits. A few ridges were composed of very strange, steeply dipping, lineated flows very different from the pillow-style morphology of deep-sea basalt. An enormous amount of gas would also have been released, evidenced by the bubbly nature of most particles. 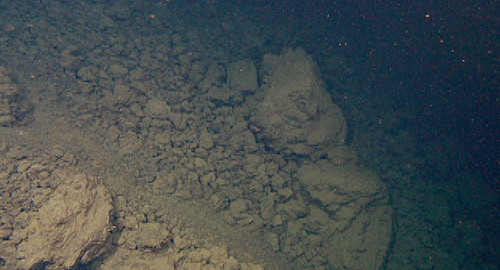 Breccia (rock composed of broken fragments of minerals or rock cemented together) deposits were common on slopes, valleys and even ridge tops. 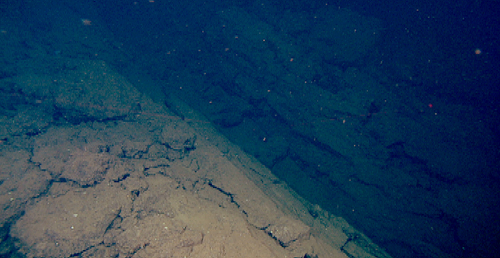 Strange, steeply dipping, lineated flow coming down from the data gap to the northwest.

All the excitement about this incredible place had our punk-rock-crushing wax head going bonkers! 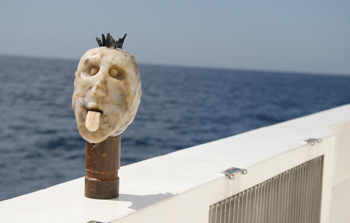 Recycled wax used from rock crushing over the entire cruise.

Some of the previous log entries mention young/ old relationships, so today I’m going to explain how we determine this relationship using what we call relative dating.

To get familiar with relative dating I’m going to use an example; If we ask an average person what he did yesterday, and we ask this person to tell us the activities in a random order, maybe he will come up with a list like this one: dinner, breakfast, run, television, restaurant, wake up early, come home, take a shower, work, going to sleep and work again. These words really don’t make any sense. But, if we ask this person to tell us exactly what he did from the moment he woke until the moment he went to sleep, maybe he will tell the next story: Woke early in the morning and went running then went back home to have breakfast; after that I showered and went to work, had lunch in a restaurant, and went back to work; after work I went back home and had dinner; after that, I watched television and then went to sleep. Now, this history really makes sense and this person actually is making a relative dating, he is putting the activities that he did during the day in chronological order.

The people who study earth history do the same thing to know the order in which geological events or processes took place. So now let’s make a geological relative dating! Suppose that someone asks us to do a relative dating of the events that form the features observed in Figure 1. 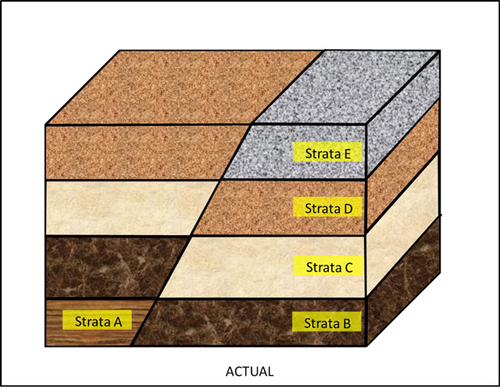 We are going to start by saying that the first thing (event) that happened was the deposition of strata A to E, with strata A the oldest (first to deposit) and E the youngest (latest strata deposited, Figure 2). 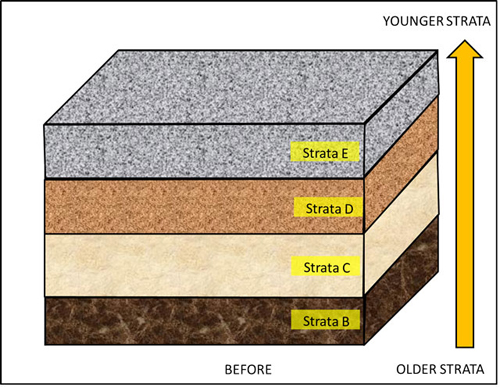 Figure 2: How sediments were deposited in the first place.

Then an earthquake took place and displaced the strata along a fault in a vertical way as shown in Figure 3. 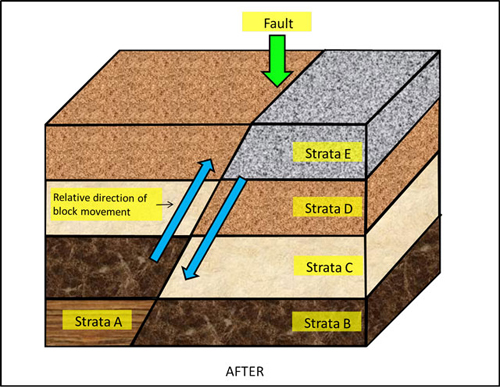 Figure 3: After the sediment strata were deposited, an earthquake took place and displaced the strata along a fault as shown.

We can make a list of events that led to the appearance of the block shown in Figure 1:

So this is what relative dating is all about. In this way we can get answers to questions like: When did the fault actually take place? The answer will be, after strata E was deposited. How old is the fault? And the answer will be, older than the age of strata E because the fault is displacing all the strata including E, so this strata must have been deposited before the fault took place. See how important relative dating is when it comes to putting in order geological events or processes that help us to understand earth history?

Now that you know how to establish the young/old relationships with relative dating, you must be wondering if you can actually put an age on these events. That would be neat, yes?

Geologists also work to put an age on these events, so we will know when things happened. It is called absolute or radiometric dating. This technique of dating is based on the use of radioactive isotopes. When minerals form, some of the atoms that end up in the rock are radioactive. Many can be used as a clock that can tell us the approximate age of the rock.

Imagine buying a watch; when you put in the battery the clock starts ticking and begins measuring time, and when the battery life is finished the watch will stop. Suppose that the battery only lasts 12 hours, and we put the battery in the watch at 12:00 noon. In the afternoon of the same day we want to know the time, so we look at our watch and it reads 6:00 p.m. Another way to find out what time it is to take the battery out and measure the amount of charge it still has; if it has half the charge then, we know that is 6:00 p.m. because we put in the battery fully charged at 12:00 noon (and remember that the battery has a life of 12 hours) and now it is only 50 percent charged, so six hours must have passed. The radioactive isotopes contained in minerals work the same way; they start “ticking” when the lava solidifies and forms a rock. In our relative dating example, if we are lucky enough to have rocks in each strata containing radioactive isotopes, we can date these rocks and actually assign an age to each strata. Then we can know how things happened (relative dating) and when it happened (radiometric dating). This is exactly what the scientists aboard the Western Flyer are trying to do in order to figure out the volcanic history of the Alarcón Ridge.