Day 9: The power of the processes

The remotely operated vehicle (ROV) had a major hydraulic leak, so we rock-crushed all day and had a chance to catch up a bit. It was not too hot and I found myself in a reflective mood.

We have been mapping and collecting images and samples of the lava flows to be able to understand as much as possible about the eruptions here at Alarcón Rise. We tease what we can from the mute rocks; our investigations are akin to forensics. You have heard in these cruise logs about what the lava chemistries, eruption styles, and subsequent fracture patterns may mean.

But we also enjoy the beauty of this landscape and marvel at the power of the processes that shaped it. In the birthing of new seafloor, lavas pave the surface with tremendous outpourings of sheet flows and slow pulses of pillows. Their final throes are frozen in place, and their morphologies are a testament to the awesome violence or the resolute insistence of their emplacement. Their residual heat drives fluids that build spectacular hydrothermal chimneys and nourish bacteria and animals, and are hot enough to scorch to black the wooden dowel supporting our temperature sensor.

But over time, the heat in the lava wanes, hydrothermal fluid flow ceases, and the chimneys crumble. The flow features are covered by new flows, or busted up by tectonic fracturing of the plates pulling apart. They are dusted, then buried in the sediment that rains down through the water column year after year. The beautiful lava forms are smothered and lost to time. The crust cools and subsides as it is transported slowly away from the heat of the ridge crest, and the only trace of its having been at a ridge is the magnetic anomaly.

The life of molten lava is brief. The frozen forms remain a bit longer, but over the span of geologic time, they too are ephemeral. Our human time scale intersects with their time scale just here, at the ridge.

Left: This lineated sheet flow was the “super-highway” of an eruption, where a torrent of lava flowed from the eruptive vent. Right: Lava pillars support an arch, which had been part of the seawater-chilled flow surface, before the still-molten interior drained and the roof collapsed. The pillars somehow continue to stand, despite the repeated fracture-producing earthquakes that must shake the area.

Pillow lavas. Left: A pile of elongate pillows oozed like red-hot toothpaste down the slope of a cone built of many, many other pillows. Right: A bulbous pillow sagged into a bird-bath shape when its interior dribbled out into little pillow buds (foreground).

Left: A lava pillow rind cracked open to disgorge more lava. Right: The edge of a broken lava pillow is home to some hydroids.

Hydrothermal chimneys. Left: Riftia tubeworms, each about a meter (three feet) long, thrive in the warm, sulfide-rich fluid seeping from this chimney. Several meters above, the main orifice of the chimney gushes water that is over 550 degrees Fahreneit and loaded with minerals that precipitate as black “smoke”. Right: After the hydrothermal system dies, so do the vent-specific animals. This inactive chimney now is substrate for some sponges.

Left: An old flow is deeply fractured. Right: Three generations of volcanic events: A vertical wall of truncated pillow lavas in a fault scarp are veneered with drainage shelves from a flow that ponded against it and drained, and draped with elongate pillows of a later flow from above.

In my previous log entry, I talked about the relative age and structural relationships we’ve seen between the fractures and lava flows that we are studying during this leg of the expedition. Today, as our ROV-diving journey progresses along the Alarcón Rise we have continued to discover, and also be amazed by, the extent and pervasive distribution of the faults and fractures which strike sub-parallel to the ridge axis. I cannot help thinking about the fact that these geological features are important, not only because they are an intrinsic geomorphologic component of this dark and yet beautiful landscape, but because these structures accommodate part of the deformation that results as the Pacific and North American tectonic plates diverge and slide past each other in different directions. 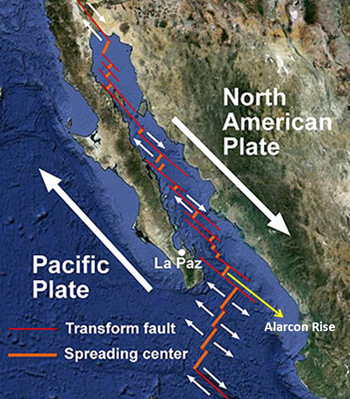 Regional tectonic map showing the direction of movement of the Pacific and North American Plates and the rift system geometry along the axis of the Gulf of California. Note that as new oceanic crust is formed parallel to the spreading centers, the adjoining transform faults accommodate the lateral component of shear parallel to the direction of plate motion.

The set of fractures located to the north of the Alarcón’s ridge axis lie strictly on the Pacific Plate, whereas the fractures to its south lie on the North American Plate! Therefore, in a general sense, the underwater fractures that we are seeing during this expedition can be viewed as a small portion of the broad tectonic boundary between these two major tectonic plates. 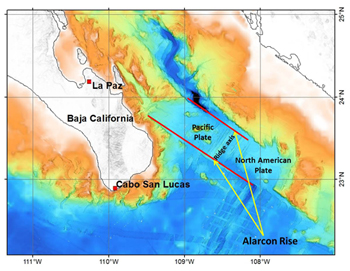 Simplified tectonic and bathymetric relief map of the southern Gulf of California. Map shows the overall geometry of the Alarcon spreading center and adjoining transform faults (shown in red). During our dives we’ve explored volcanic cones and fractures located along both the northwest and southeast sides of the ridge axis, corresponding to the Pacific and North American plates, respectively. Warm colors (orange) represent shallower depths whereas cold colors (blue) represent deeper waters.

By definition, faults and fractures are brittle structural features capable of producing earthquakes. To find out the size (magnitude) and distribution (location of epicenters) of earthquakes along the Alarcón Rise, the reader is prompted to visit the IRIS seismic monitor webpage. In general, it is widely accepted that earthquakes at mid-ocean ridges, such as the Alarcón Rise, are relatively small (magnitude of less than 4.9) as compared to the medium (magnitudes between five and 7.9) and large (greater than eight) magnitude earthquakes that can be generated along strike-slip and subduction zones, respectively. However, given the relative young age of the seismic networks around the world, and the fact that mid-ocean ridges are mainly located in remote and non-populated areas, I cannot help but wonder about whether or not we could possibly be underestimating the size, and potential damage, of earthquakes that can be generated at these tectonic boundaries. Perhaps the most recent example of how we can be underestimating the potential size of an earthquake, in relation to the type of fault capable of producing it, would be the April 11, 2012 strike-slip earthquake off of Sumatra (8.6 magnitude).

The MBARI 2012 expedition to the Gulf of California will provide a wide community of scientific researchers with valuable information about the biological, geological, and tectonic processes which are presently occurring in a rather inaccessible place such as the Alarcón Rise. The autonomous underwater vehicle (AUV) mapping will provide a powerful tool to map in great detail the length, offset, distribution, and temporal relationships of faults and fractures on the seafloor. This information will bring insight not only into the volcanic history and structural behavior of this mid-ocean ridge, but also into the magnitude of scarp-forming events.

In the meantime, I am thrilled to be able to watch in real time, during our ROV dives, the spectacular geomorphology, vast biology, and astonishing volcanic and tectonic features at the Alarcón Rise. 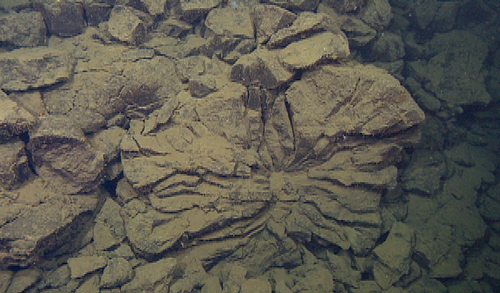 An amazing feature formed by a fault scarp. A portion of the face of a fault-scarp truncates a set of pillow lavas (center), with its characteristic radial fractures giving the pillow a “wagon-wheel” shape.