Today we dove on five active hydrothermal vents and several more inactive chimneys. The active vents spew hot, chemical- and mineral-rich water through chimneys which slowly grow through the precipitation of minerals. Some of these chimneys grow to 12 or more meters in height (40 feet) and the black, mineral-rich water we measured at one vent today reached temperatures of 550 degrees Fahrenheit. Biologically these vents are of interest because a diverse community of organisms is found here which is not dependent upon surface productivity, or photosynthesis. Photosynthesis occurs in the sunlit surface waters of the ocean and most organisms in the deep are dependent upon this surface productivity which slowly falls to the seafloor in the form of marine snow. However, at hydrothermal vents bacteria use the chemical rich water as a source of energy, a process known as chemosynthesis.

These chemosynthetic bacteria support dense populations of worms, snails, crabs, clams, and fish. The giant tube worms found here have no gut but instead farm the chemosynthetic bacteria inside their bodies. The worms provide a home and bring oxygen to the bacteria with their hemoglobin-rich blood. The bacteria, in turn, provide nutrition for the worms. Some of the giant tube worms we find are very large; one specimen collected today was nearly 1.2 meters (five feet) long! 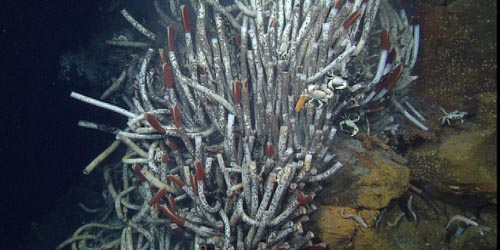 A dense community of organisms grows upon the hydrothermal chimney. These giant tube worms can grow to two meters (six feet) in length and provide food and habitat for a variety of other worms, snails, crabs, and fish.

Adjacent to the chimneys, lower temperature water is often released from the seafloor over a wider area. These areas of diffuse venting are home to large vesicomyid clams, which also house chemosynthetic bacteria in their bodies, similar to the giant tube worms.

We’ve collected samples of these vent organisms in an effort to understand the relationship between the populations living here and those living at other hydrothermal vents in the Pacific Ocean. We use molecular markers, or gene regions on the organisms’ DNA, to determine the relatedness of organisms found here and elsewhere. Molecular tools can also be used to tell us something about the evolutionary process such as when and how a new species emerged or how one species is related to other similar species. For example, we know that these giant tube worms are related to the bone-devouring worms (Osedax spp.) because of molecular tools. Interestingly, we found mammal bones in a lava channel on today’s dive and, although we did not find Osedax, we found snails and mussels like we find on whale bones and, also using molecular tools, we will be able to tell the relatedness of species found on these bones to those on bones of whales we have surveyed in the Monterey Canyon. 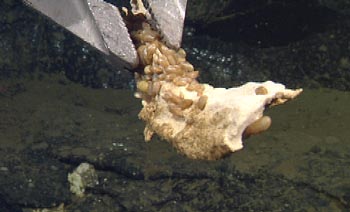 This mammal bone we collected was home to a variety of snails and mussels. These animals are also found on whale bones in Monterey Canyon. Using molecular tools will be used to show the relationship between the two populations.

We also collected samples of the sulfide chimneys, both active and inactive, and will determine the ages of the inactive ones using radioactive radium. Later in the dive, we surveyed more of the large lava sheet flow that hosts all the active hydrothermal sites we have found. Analysis of the dozen or so samples we have collected from this one large flow will allow us to evaluate magma-mixing processes in the magma chamber that underlies the ridge axis at a depth of one to two kilometers below the seafloor. At the end of the dive, we determined the relative ages of a few older sheet flows and collected samples for dating and chemical analysis. They will contribute to our understanding of the eruption history of the entire Alarcón Rise. 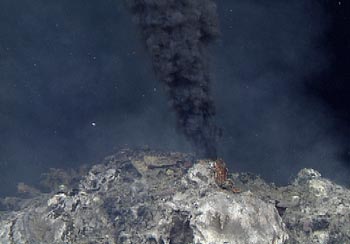 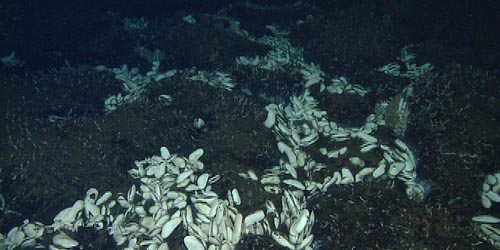 A dense bed of clams was observed in an area of diffuse venting adjacent to a hydrothermal chimney. 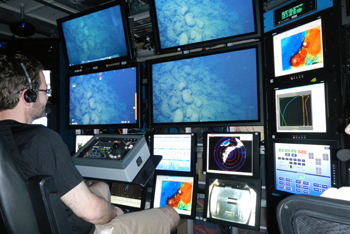 Brian Dreyer at the camera controls in the ROV control room. 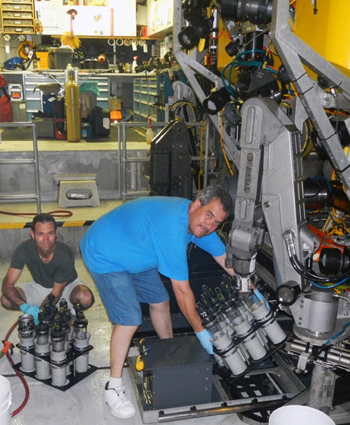 Ronald Spelz and Rigoberto Guardado reload the push core racks on the ROV in preparation for the next dive. 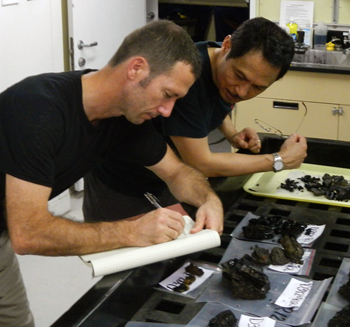 Ronald and Pat Castillo describe rock samples in the lab that we collected on the dive.