The wind has begun to blow and is cooling us off a bit, which is welcome. The seas have picked up too, so the ship is moving around under our feet for the first time this trip. 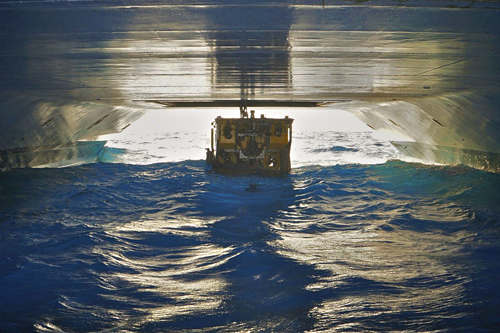 Our Second Mate, Andrew McKee, took this photo of the remotely operated vehcile (ROV) Doc Ricketts being recovered this morning. He lowered a camera from the bow aimed back between the ship’s hulls, and snapped the photo as the vehicle was being lifted through the moon pool at the center of the ship.

After a false start this morning due to a hydraulic leak, ROV dive D398 set out to explore more old/young flow relationships further northeast yet on Alarcón Rise. We began the dive on a feature that looked very strange in the autonomous underwater vehicle (AUV) map. Rather than a smooth shield or rounded mound as produced during low-effusion-rate pillow eruptions, or the flatter and collapsed or channeled terrain of lobate pillows or sheet flows, which are the eruptive styles usually produced at mid-ocean ridges, it is a broad, lumpy, irregular pile 500 meters by 320 meters by 55 meters tall (1,640 feet by 1,050 feet by 180 feet tall). It is unlike anything we have mapped on the mid-ocean ridges of the Northeast Pacific or Lau Basin, and it is not distinguishable in the ship-based bathymetric map of the Alarcón Rise. It looks a lot like cones we have mapped on the summit of Davidson Seamount off California, which are composed of viscous, trachyte (silica-rich) lavas.

The steep slope of this dome is rounded boulders of talus and intact outcrops of lava that resemble the ragged surface of ‘a’a (rough, rubbly, or blocky lava) flows. The gravel we collected contains extremely pitted, clear glass, which is probably rhyolite pumice. Rhyolite is the same silica-rich chemistry of granite before the crystals have a chance to grow. Silica-rich lavas are commonly erupted by volcanoes on the continents but extremely unusual for mid-ocean ridges! It is possible that the feature is a viscous, silicic dome, which shed talus that tumbled—possibly glowing—as it built. This would be analogous to the dome that grew in the crater of Mount Saint Helens in the Cascades.

A four-kilometer-long series of narrow, steep ridges extends to the northeast and southwest of the dome, and may be related to it. We found the ridges to contain shattered pillow lavas. Some of the pillows are round as if emplaced on flat ground but are now on 60 degree slopes, and matching halves of pillow mounds lie on either side of ridges. They have been pushed upward and apart, and tilted. These ridges may be from dike intrusions that buckled up the crust above but may not have reached the surface.

This feature is less than 10 kilometers (6.2 miles) from the northern transform fault and only about 100 kilometers (62 miles) from the continent, either of which may influence the eruptions here. It is also 25 kilometers (15 miles) northeast from the center of the most volcanically robust part of the ridge. Perhaps lavas that feed along dikes that far cool so much that the residual melt becomes viscous and enriched in silica, so it behaves differently than the basaltic lavas normally found on mid-ocean ridges. 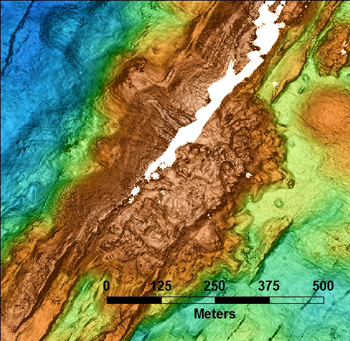 The dome in the center of the MBARI AUV bathymetry map was explored and sampled today. It appears to be composed of more viscous lava than the low, rounded pillow mounds and flatter sheet flows that surround it. Narrow, steep ridges extend to the northeast and southwest, and may be related. In the coming weeks we will be editing the noise in the AUV data, which we only received Monday. The white space is where there is no data. The blue colors are deep, starting at about 2,500 meters (8,200 feet), and oranges are shallow, to 2,345 meters (7,700 feet). 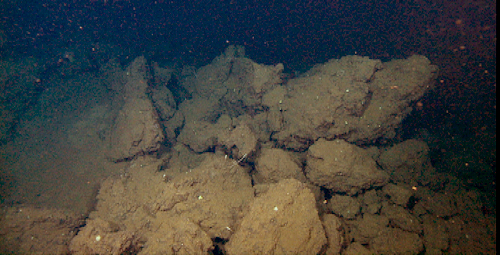 Blocks of lava talus on the flank of unusual dome feature we explored today.

The wind started blowing Thursday afternoon, as a result small waves were formed and as time went by the waves started to get bigger. All night the ship was moving around quite a lot, but nothing to worry about. On Friday we still were having big waves. The dive started and a few minutes later the remotely operated vehicle (ROV) stopped its descent. The technicians brought the ROV up to the ship to determine the problem. Once the technicians finished doing their thing with the ROV, the ROV was on its way again.

But today I’m not telling you about what the ROV saw at the bottom, I will let someone else tell you about it. Today I’m going to tell you the story of the “Rock Crusher”. It all began when I heard Jenny Paduan talking to another person about the “Rock Crusher”. It is an oceanographic instrument used to obtain rock samples from the seafloor. I got interested in knowing how this instrument works.

There are two methods used to study the seafloor, one is indirect and the other is direct. The indirect method is used when we make suppositions of what may be found or how processes may be taking place using the information that we have in hand without actually sampling or measuring in the place of interest. Meanwhile the direct method consists of making actual measurements or observing the processes in the place on interest, like getting a rock sample to conduct a test on it in order to determine what type of rock it is. The “Rock Crusher” falls in the direct method’s category because it collects fragments of the seafloor so we can study them. 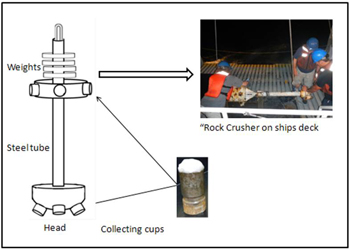 Figure 1. In this picture we can see the parts of the “Rock Crusher”.

The “Rock Crusher” works this way; the collecting cups get filled with wax and are put in the tubes coming out from the head and upper ring. They get secured to the structure using some bolts. Then the instrument is lowered into the ocean (Figure 2). When it reaches the bottom, because of its weight, the rock gets crushed and the rock particles get stuck to the wax, the instrument falls on its side and more rock particles get stuck to the collecting cups that are in the upper ring. At this point we bring the instrument to the surface, and once on the ship’s deck the collecting cups are removed. Using a spatula we remove all the wax that has rock fragments and put the wax in a glass beaker with hot water and heat the beaker so the wax will melt and float to the surface (Figure 3). At this moment all of the rock fragments that were attached to the wax will settle down at the bottom and there you have it, you will have in your hands an actual sample of the rock found in the seafloor that you can analyze (Figure 4). Ingenious isn’t it? 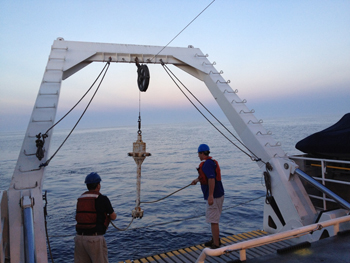 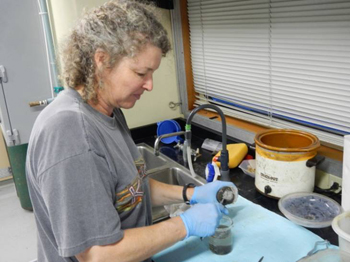 Figure 3. Jenny Paduan removing the wax with rock fragments from the collecting cups and putting the wax in a beaker full of water. 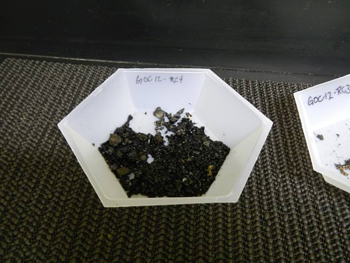 Finally I can tell you the importance of using this instrument; when you make dives with the ROV you will be collecting rocks and sediment samples along a track in the seafloor but covering a fairly big area will be almost impossible. This is where the “Rock Crusher” comes in handy. Based upon the scientists’ knowledge and what they have seen during the dives they can guess the type of rock that can be found in the area between the dives sites. The “Rock Crusher” is used to bring a sample from the bottom and verify that in fact the scientists are right (or maybe not) about the type of rock present at the seafloor.