Our dive today was a little farther to the northeast of the previous dives, along the neovolcanic zone of the Alarcón Rise, using the maps from the autonomous underwater vehicle (AUV) to guide our dive. As on previous dives, we observed and collected rocks and sediment push cores from numerous lava flows we identified in the AUV maps. Our goal is to determine their relative ages, morphologies, and whether some small cones were pillow mounds or old sulfide deposits (they were all steep pillow mounds today), and to examine fracture patterns. 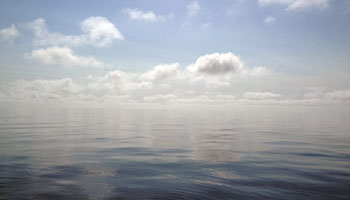 The clouds appeared to melt into the windless, glassy sea this morning.

If you were to sit in the control room with us during one of our dives you would hear us repeating terms such as “lobate flow,” “jumbled sheet flow,” “elongate pillow lava,” “truncated pillows,” and “Ooo… what a nice plag-phyric glassy basalt!” And, if you hang around with us long enough, you may even begin to understand these terms, too. It is true that geologists seem to be speaking in another language—well, most of the time—but there is a reason to use a unique and consistent set of terminology. We need to be able to rely on our notes to accurately reconstruct the morphology of the seafloor. Morphology refers to the shape and structure of the landscape. Each of those terms I mentioned above are used to describe a specific type of lava flow or feature observed along the Alarcón Rise.

There are two main lava morphologies to note: sheet flows and pillow lavas.

Sheet flows are flat (or flattish) sheets of solidified lava. Depending on the shape of the underlying seafloor and the rate of the eruption, different sheet flows can look very different. Swift-moving flows will have well defined flow lines and will look like a solidified river of lava like in the above picture. If the flow gets fracture and jumbled we then call it a jumbled sheet flow. As the flow gets further from the source, it cools and slows. The morphology of the flow changes as well; the flow will become more lobate. If the rate slows even further, pillow lavas will begin to form.

Pillow lavas look like rounded blobs of solidified lava. They are formed as lava extrudes slowly out of the seafloor and the outer edge is cooled very quickly by the cold seawater. Think about squeezing toothpaste out of a tube, but instead of it flowing freely, the outer skin of the toothpaste hardens as soon as it touches air. Pillow lavas come in a variety of sizes and shapes and each of these shapes can tell us a bit about the eruption that formed them. Today, as we were surveying flows near fissures (or large cracks) in the seafloor we saw both what we call elongate pillows and truncated pillows.

The type of pillow flow observed across a fissure can indicate the order in which the features formed. If there are elongate pillows flowing over the edge and into the fissure, we know that the flow occurred after the cracking of the seafloor. If the pillows are truncated, we know that the flow occurred before the cracking of the seafloor. These are the types of relationships that are impossible to infer from the AUV mapping data and are essential if we are going to successfully reconstruct the volcanic history of the ridge.

One of our main objectives is to develop a map of all the different lava flows present along the Alarcón Rise and place these flows in order of their relative ages. This is no small task. We have to first identify all of the boundaries between the flow units and then determine the age relationships along each of these boundaries along the entire 60-kilometer (37-mile) ridge segment! To do this we need to use both the AUV mapping data and the direct observations from the dives. Changes in the lava flow morphologies, as described above, often indicate a boundary between two separate flows. These different flow morphologies can be roughly inferred from the AUV maps. Additionally, the edge of a flow will often be marked by a small change in seafloor height. Think about squirting ketchup (a new lava flow) on a plate, the edges of the pile of ketchup (the new lava flow) will be slightly higher than the surrounding plate. We can see these small changes in bathymetry on the AUV maps and can infer the edges of the lava flows. 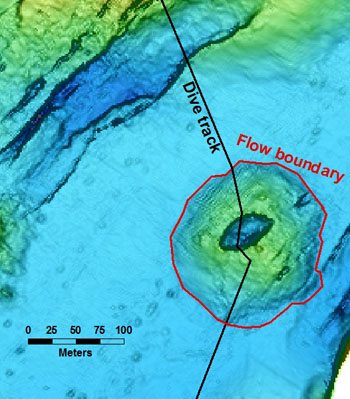 The map shows a possible flow boundary located on the AUV map. With the remotely operated vehicle (ROV) we could see that the lobate pillows of the small cone lie on top of the large sheet flow.

However, there is a caveat: a single eruption will likely display all the different flow morphologies and could have multiple flow lobes layered on top of each other. From the maps, we identified 22 potential flow units along our dive track. During the dive we marked the location and took video of each of the contacts between flows.

Contact between several different units. The elongate pillow lavas flowed around the collapsed sheet flow (which had left the horizontal shelves as it drained and its flow surface dropped). This shows that the pillow lava flow occurred after the sheet flow formation and collapse.

These visual observations will help to improve our confidence in the flow boundary that was drawn using the AUV maps. Additionally, we took rock samples and push-core samples from each flow unit to confirm that each identified flow was, in fact, a separate flow. 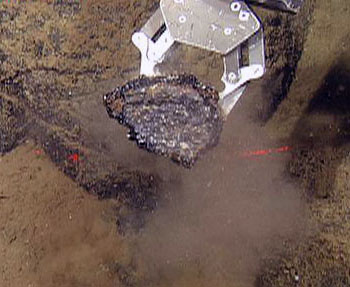 Basalts are black volcanic rocks that compose most of the ocean crust. This particular chunk of basalt has a lot of white plagioclase crystals. Plag- refers to the plagioclase mineral; phyric- means that there are large visible crystals in the rock.