Today is another beautiful day in the Gulf of California, the sky is blue and the sea is calm. However, in the afternoon a few clouds appeared in the sky; hope that is not a sign of bad weather coming our way.

Today we are conducting our remotely operated vehicle (ROV) dive D395, just northeast of the dive we did yesterday. That means that we are going north in the Gulf of California. Our chief scientist Dave Clague, as in all the dives, is very excited about this dive because we may find some active chimneys, but deep in our heart we know that we may not find activity on these chimneys because yesterday we didn’t find active ones, and now we are to the north of that dive in a less active area of the Alarcón rise.

The first images that we received reveal a seafloor similar to the one we found yesterday; a seafloor covered with lava flows, but there are some differences. In the first part of the journey we didn’t see as many irregularities—big fault scarps, big submarine mounts, big talus deposits, and fissures—as we did yesterday, which suggests a less active area. As we expected, we also found some chimneys that were inactive. 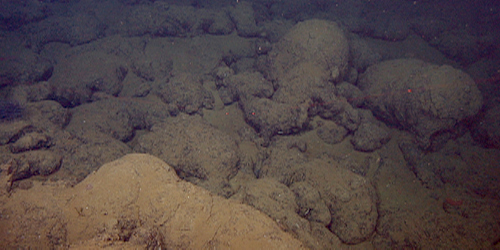 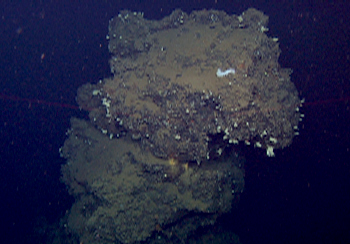 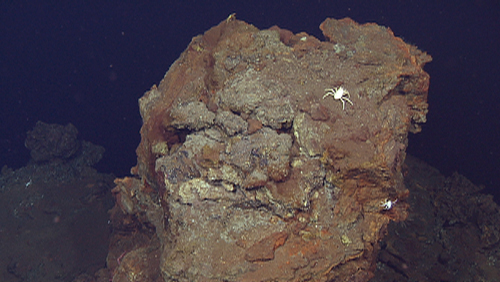 Tall inactive chimney found at the end of our dive with a few organisms living on top, like the white crabs (galatheids).

When the journey was coming to an end, we found several more inactive chimneys. When the ROV approached a chimney, we noticed something shining on the surface. It was a mineral called pyrite. The presence of this mineral indicates that the temperature was very high when it precipitated. 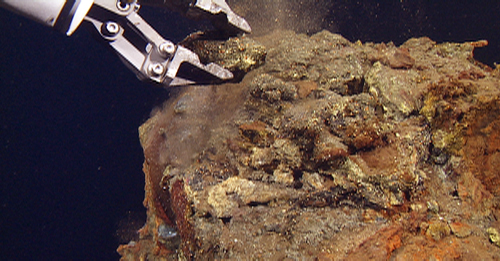 The yellow mineral that shines in the sample is pyrite.

As in the rest of the dives, we collected lava samples and sediment push cores. These samples will be analyzed in specialized labs, and the information will help to get a better understanding of processes taking place in the Gulf of California. For example, some of the microfossils contained in the sediment can be used to; a) try to detect changes in water productivity, b) determine how far the California Current penetrates the Gulf of California, c) observe how oxygen concentrations in the water vary over long spans of time, d) see how the climate has changed in this area, and many more interesting and useful things.

As several people have mentioned by now, one of the things we do with the ROV at the bottom of the ocean is collect and bring back rocks. To some people they all look the same: black, volcanic rocks—great for paperweights! But to us, each rock has a story to tell, and when we put all those stories together, we hope to be able to answer some bigger questions that others have been describing here. How often do eruptions occur? How big are they? Where do they come from? Does the same batch of magma feed both Volcano A and nearby Volcano B? Or did they come from different sources? What processes deeper in the Earth’s mantle led to that batch of magma? In order to answer some of these questions, we need to know something about the composition and age of the rocks.

Part of the story can be told just by the observations we make at the seafloor combined with the high-resolution sonar maps. As discussed by Ryan Portner on Day 1 and by Ronald Spelz and Brian Dreyer on Day 3, if we can tell that flow A is on top of flow B, or has a thinner sediment cover, we know that flow A is younger. As Rigoberto mentioned above, today’s dive explored several extinct hydrothermal vent regions. Although active vents are exciting and beautiful, inactive vents tell a useful story as well, because if there is no heat to drive the vents, then the lava flows are probably not very young.

These observations all tell us relative age—in other words, we can sometimes tell if one flow is older or younger than another. But we can’t say one is 40 years old and the other is 350 years old—we can’t tell absolute age. And we can’t say anything about how magma composition varies. 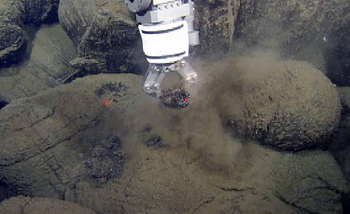 The ROV’s manipulator arm takes a sample from a pillow lava. 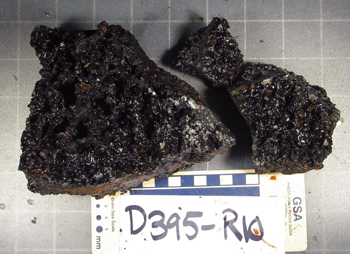 The sample from the image above back on deck.

To do this, we need rocks! (And mud, as noted by Brian on Day 3.) Several scientists on the cruise will be working with the rocks back at home, using different techniques to extract different bits of the rocks’ stories. Some will be looking at the different minerals in the rocks and the overall composition of the rocks: How much iron, magnesium, silicon, etc. are in the lava rocks? Variations in rock composition can tell us how similar or different the magma source is. Minerals in the lavas might also tell us how deep the magma chamber was, how much time the magma spent in the magma chamber before erupting, or how old the rock is. The compositions of the minerals in the sulfide rocks may also tell us how long it has been since the venting ceased. Even the magnetic properties of the rocks can tell us something useful. When lava cools after eruption, it records the direction and strength of Earth’s magnetic field, which varies over time. By extracting this “paleomagnetic” information we can try to place absolute or relative dates on the flows.

Rocks can tell us many things. We just have to know what and how to ask, and then listen carefully to the answers! 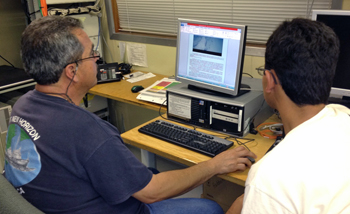