During today’s remotely operated vehicle (ROV) dive on the southern Alarcón Rise, we came across a series of spectacular structural features, which include fissures, fractures, and fault scarps. These structures, some of them several hundred meters long, and some with vertical offsets of a few meters, represent a very powerful geological tool to reconstruct the tectonic and volcanic history along this important spreading center in the boundary of the Pacific and North American Plates.

Today’s observations showed that in some places the fractures appear to be relatively recent, as evident by the apparent young age of the fractured flows, based on having few sessile (fixed in place) organisms, or relatively thin sediment cover. In contrast, fractures and fault scarps elsewhere were observed to have been partially or totally overrun by lava flows, suggesting their preexistence and relatively older age 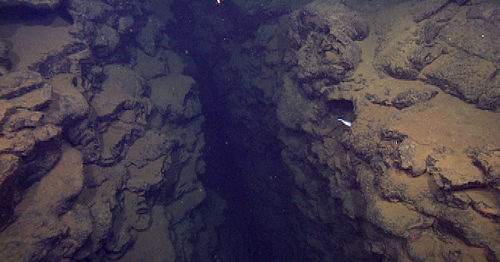 A wide fracture, reaching several meters deep and cross-cutting a series of pillow lava flows. Notice the relatively thin layer of sediments on the top (middle and upper right) suggesting a fairly young age of this flow, perhaps only a few decades old. 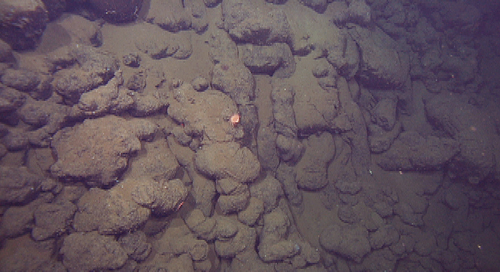 This portion of a fault scarp has been overrun by lava, which dripped down the nearly vertical face of the scarp as elongate pillows (center of the picture). These structures indicate that at the time of eruption, this scarp was already present. 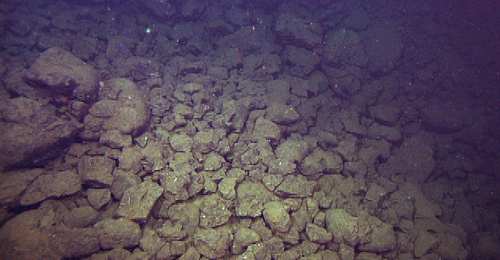 Sometimes the lava drips break off during and/or after their formation, especially along scarps with great vertical displacement. The fallen fragments can accumulate at the toe of the scarp, developing a gentle slope of talus.

The best way to closely visualize the relative time relationships between rocks and scarps during today’s dive is with the aid of our detailed seafloor map, generated with data collected by our autonomous underwater vehicle (AUV). Analyses of the sediment and rock samples that we collected during this dive, and the dives to come, will help us constrain the time when the features formed. Furthermore, the detailed mapping describing the time and space distribution of these tectonic features will allow us to explore deeper into the history, and perhaps the magnitude, of scarp-forming earthquakes in this area. Today is still only the beginning of an amazing journey and, since we have only visited a relatively small portion of the rift, I’m looking forward to the upcoming dives on the Alarcón Rise. 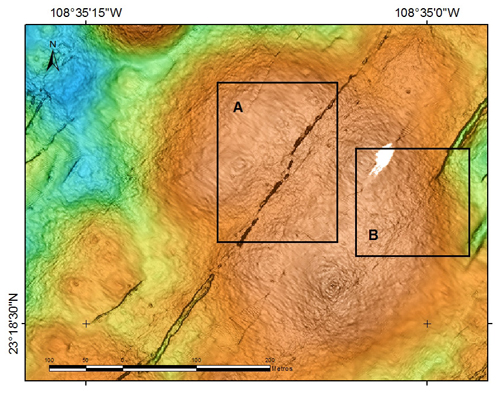 Today’s dive focused on examining the relationships between older and younger lava flows. Our objective is to better understand the processes controlling how ocean crust is made and how seafloor morphology evolves though time. At oceanic spreading centers, lava erupts in discrete locations along the spreading axis over a several-kilometer-wide zone, called the neo-volcanic zone. It is not uncommon for lavas that erupted over a large range in time, up to several thousands of years, to be in direct contact with each other. We use maps and observations to construct a relative chronological framework. For example, older lava flows at mid-ocean ridges tend to have a higher abundance of fractures than do younger lavas, and we can often resolve many “older/younger” relationships with our high-resolution maps created with the AUV D. Allan B. Adjacent older and younger lava flows are clearly visible along the Alarcon Rise.

To resolve more subtle differences in ages of lava flows, direct visual observation of lava contacts is key, and the MBARI submersible ROV Doc Ricketts allows this more detailed view. This is often sufficient to figure out how the newest crust is generated and evolves, but we would also like to know how fast these processes happen. This requires obtaining absolute ages on at least a few lava flows in order to pin down the relative age relationships.

One method of dating older lava flows involves using push cores to collect sediment deposited on top of the flow. This sediment, which accumulates slowly through time, commonly contains small, carbon-rich fossils, and a radiocarbon date of the fossils at the base of the push core gives a minimum age for the lava flow. We have applied this method on the lavas from the Juan de Fuca Ridge for several years, and this is our initial attempt on the Alarcón Rise. On today’s dive, we collected geological observations and lava and sediment samples from more than a dozen flows. 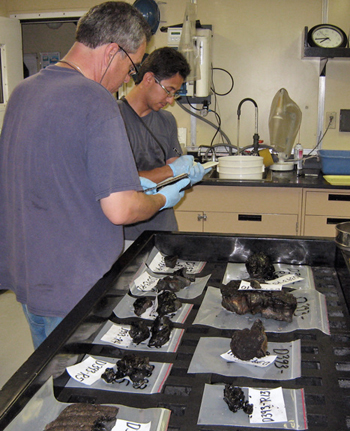 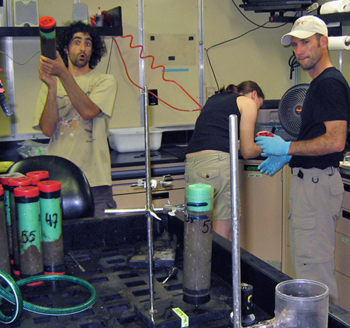