As the remotely operated vehicle (ROV) descended into the blue depths above the Alarcón Rise, the control room was abuzz with anticipation, because today we were planning to dive on one of strangest environments in the deep sea: a hydrothermal vent field. Hydrothermal vents are regions where hot water is being expelled from the seafloor, giving rise to a rich community of organisms, many of which are not found in any other ocean ecosystem.

Along ocean spreading ridges, like the Alarcón Rise, the seafloor is cracked and faulted due to the high levels of tectonic activity in the region. Cool seawater seeps down through these cracks and is heated by the hot magma below the ridge. As the water is heated, it becomes buoyant and begins to rise back to the surface. During its ascent, the hot water leaches minerals from the Earth’s crust. When the hot water exits the seafloor and comes in contact with the cold seawater, these minerals precipitate and over time can form tall chimneys and mounds composed of heavy metal sulfides. The sulfur in the vent water also provides the energy source required to support communities of vent life.

Hydrothermal vent along the Alarcón Rise.

Hydrothermal vents have been documented to the south of our location at 21° north and to the north at Guaymas (located at 27° north), however, vents had not yet been discovered along Alarcón Rise. In fact, very few studies have focused on the Alarcón Rise, and our dive was the first to explore this section of the ridge. Now, you may be wondering, if we’ve never explored this area before, how did we know where to dive to find hydrothermal chimneys? Based on the geology of the region, we knew that there was a high probability that Alarcón Rise would have active hydrothermal vents. However, exploring the entire ridge using the ROV to search for vents would be virtually impossible and incredibly time consuming. Instead, we sent our autonomous underwater vehicle (AUV) to map the region before we arrived. AUV surveys collected one-meter-resolution bathymetry data for the entire ridge segment, and based on these high-resolution maps it was possible to identify features that appeared to be chimneys.

Once the ROV reached the seafloor we headed toward one of the chimney sites identified by the AUV map. As we got closer, we knew that we were heading in the right direction; a thriving community of vent animals spread out before us. Some of the most distinctive animals include the large red tube worms, Riftia sp., that live in clumps around hot-water vents. 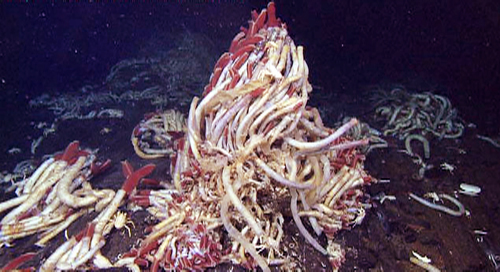 An army of squat lobsters advances over the top of a mound of old tube worm casings.

Since vent communities have never before been observed on this section of the ridge, we stopped to take some samples. A genetic analysis of the animals collected here will be conducted and these genetic markers will be compared to those from other vent sites, specifically vents located at 21° north and Guaymas. These genetic analyses will provide a better understanding of the distribution of vent species along the East Pacific ridge system.

The ROV’s manipulator arm collecting a clam from an active vent site.

After sampling, we continued toward the tall chimney structures identified on our map and, just as predicted, we found several tall chimneys, some active and some inactive. We were able to verify that the chimney heights were also accurately mapped with the AUV. Finding the vents was very encouraging, as it suggested that we could successfully identify hydrothermal chimneys from our AUV map data. Now, without diving on every single vent field, we will be able to determine the distribution of vents along the ridge, infer the distribution of vent communities, and estimate the volume of the sulfide deposits using the AUV maps. 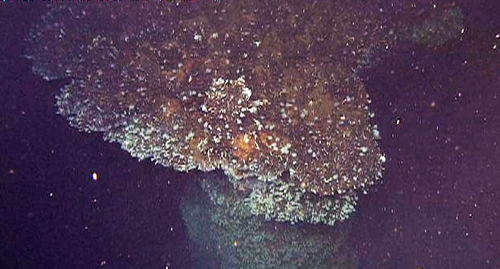 This is the top of the largest chimney we found today. It rises more than 20 meters (65 feet) from the seafloor. While the top does not look very active, there is a thriving community of Riftia at the base.

The active chimneys were spewing large quantities of black smoke, and are thus referred to as black smokers. However, the smoke is not really smoke at all, but rather the heavy-metal sulfides precipitating from the hot vent water as it rapidly cools. Black smokers are some of the hottest hydrothermal vents, with water temperatures greater than 300 degrees Celsius (572 degrees Fahrenheit). We recorded temperatures of more than 250 degrees Celsius (480 degrees Fahrenheit), but this should be viewed as a minimum fluid temperature as it is very difficult to get the temperature probe directly into the stream of hot water. Characterizing the temperature at a specific vent field can be very useful; different minerals will precipitate from vent waters of different temperatures. Additionally, the populations of vent species will vary with temperature.

A close-up view of the vent tube worms (Riftia). If you look closely you’ll see several fish hiding in among the worms. The little black spots covering the worm casings are limpets.

After we had thoroughly explored the vent field, we traversed over the northern edge of a very large lava sheet flow. We spent the rest of the dive collecting lava samples to characterize the nature of the volcanism in this area. Stay tuned, because tomorrow we will dive on the southern end of this sheet flow, and we will begin to piece together a more comprehensive picture of the volcanism of the region.