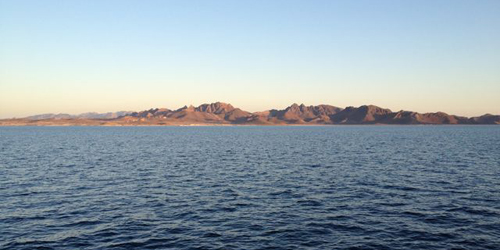 We departed the port of Pichilingue (near La Paz) last night to get a jump on the dive program. It was glassy calm and clear, making for a beautiful transit out the channel.

Today, our first dive was on the Alarcón Seamount volcanic chain, 36 kilometers (22 miles) northwest of Alarcón Rise in the entrance to the Gulf of California. The Alarcón Seamount volcanic chain is comprised of near-axis seamounts that formed on or very close to the currently active Alarcón Rise mid-ocean ridge, where we will be diving over the next several days. The seamounts are estimated to be about one to 1.5 million years old. Aside from a couple of dredges in the late 1990s, these seamounts have not been studied in any detail. 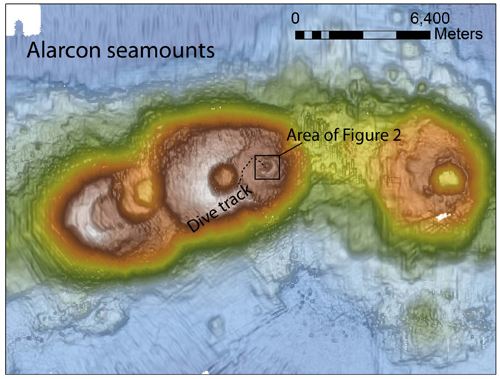 Figure 1: Alarcón seamounts showing today’s dive track on the middle seamount, starting in a smaller crater (see below) and ending on the rim of a large caldera. 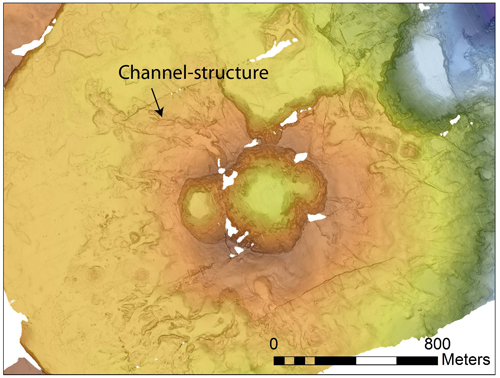 Figure 2: Pair of small craters with channel structures radiating outward. The dive began on the floor of the smaller of the two craters that you can see here, and the channel-structure we flew along is indicated by the arrow.

Our dive today used a high resolution map recently collected by MBARI’s autonomous underwater vehicle (AUV). Our geologic objectives today were: 1) to make detailed observations of some interesting channel-like features seen on the map; 2) to sample lava flows; and 3) to find volcanic sand on the top of the seamount.

We started the dive in the central crater of a large dome structure and took a meter-long push core of sediment for the record of past climates, or paleoclimatology, it might contain. We ascended the crater’s steep inner wall collecting talus—rock fragments lying at the bottom of a steep slope from which they have broken off. The outer flanks of the crater have numerous channel-like features that radiate outward. Features such as these have not been documented from a near-axis seamount before. They have relatively flat, sediment-covered floors and bowl-shaped headwalls—a nice place to pitch a tent if it wasn’t covered by 1,300 meters (4,265 feet) of water! The lateral margins of the channels contain large blocks that seem to fit together like puzzle pieces. We collected one of these large blocks and it was a jumbled, chaotic assemblage of contorted and blocky basalt lava chunks. Many of the chunks have pockets filled with sediment. The toe of the channel exhibits a bulbous “speed-bump” morphology very similar to slump features we see on land. A more in-depth analysis of the features and the substances of which these features are composed will hopefully reveal how they form. 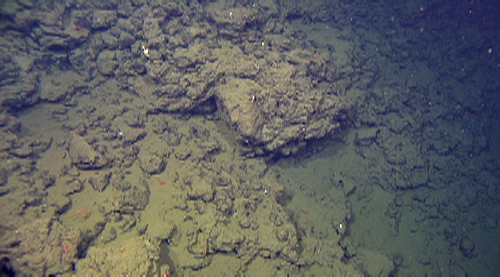 Contorted morphologies of glassy basalt clasts along the side of a channel, including a large angular block (in the middle of photo).

Upon exiting the channel-like feature, we moved across the relatively flat, lava-covered terrain surrounding the crater. We took samples of numerous basalt flows having pillow, lobate, and sheet flow morphologies. Some very beautiful contacts between flows were observed, which will give us a very good indication of “who’s on first,” so to speak. 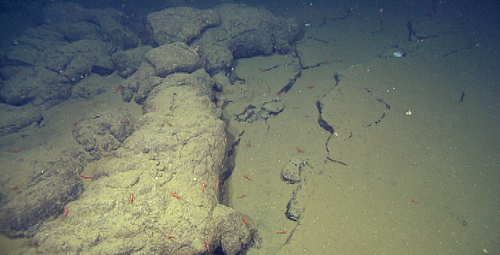 We crossed the ends of a few more channel-like structures. The flat lava terrain abruptly stopped at a very prominent fault scarp, a steep slope which may have formed from a sector collapse of the volcano. There are enormous blocks and boulders along its base, up to four cubic meters (141 cubic feet), or about the volume of a car, and they represent the lava beds exposed higher up in the fault scarp. After some hunting we managed to collect several smaller samples that will be analyzed later in the laboratory for geochemistry.

After sampling the blocky talus pile we ascended the steep vertical face of the fault scarp to the top of the seamount. We collected several samples of bedded glassy volcanic sand. This material is the fallout from an explosive style of eruption and is quite common on the tops of many near-axis seamounts, but it is generally not found anywhere else on the seamount. 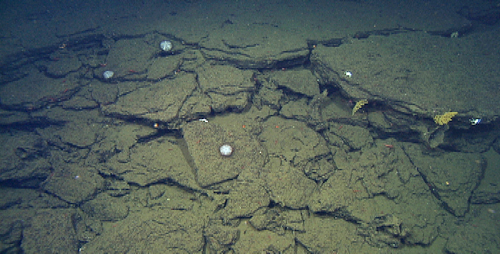 Bedded glassy volcanic sand on top of the seamount. White sea urchins and yellow corals seem to like this area.

Another common feature of many seamounts including the one we dove on today is the presence of large calderas. The caldera just below where we sampled the glassy volcanic sand is 350 meters (1,150 feet) deep and 1.5 kilometers (one mile) wide (just north of the west end of our dive track, see first map above). Calderas are thought to form by collapse as molten magma is withdrawn from the interior of the seamount. Where the withdrawn magma goes is uncertain as we do not find large eruptions on flanks or the tops of the seamounts. Perhaps this withdrawn magma retreats to deeper parts of the oceanic crust, intrudes into the nearby mid-ocean ridge, or helps to start the next seamount. This question and the ubiquitous occurrence of glassy volcanic sand on the tops of many of these seamounts keep us coming back to try to understand how these amazing underwater volcanoes form and evolve.

During today’s dive we saw numerous sea urchins and sea cucumbers making a living in the sedimented areas adjacent to geologic targets. On rocky outcrops we observed several species of cold-water coral, including antipatharians (black corals) and gorgonians (sea fans). These suspension feeders use their small polyps (tentacles) to capture and consume small planktonic organisms which drift past them in the currents. Sponges, which filter plankton from the water, were also quite common on rock outcrops and talus slopes.

We observed and collected numerous clams which will prove useful in an ongoing project that MBARI scientists are working on that uses genetic markers to understand the relationship between populations living here in the gulf and elsewhere, like seamounts in southern California.

Rattail fishes were quite common, as they are one of the most abundant families of fishes in the deep. Other fishes were also observed including small batfishes, many long and slender eel-like fishes, and a small cat shark. 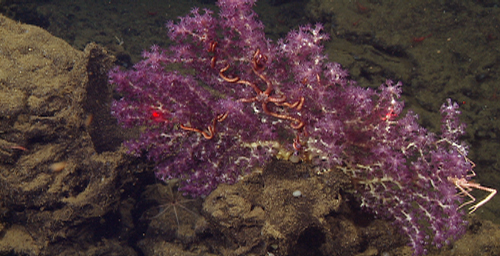 A bright purple sea fan (or gorgonian) which uses stinging tentacles to capture plankton drifting past in the currents. The red dots are lasers which are used to estimate the size of organisms. This colony measured approximately 40 centimeters (16 inches) across. These deep-sea corals are known for creating habitats in the deep as is evident by the numerous crustaceans and brittle stars. 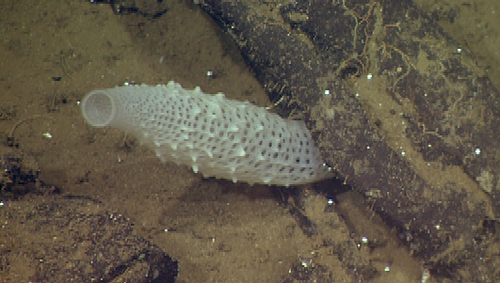 This unique looking sponge is a member of the Euplectellidae, a family known for its beauty. The geometric pattern created by the skeleton of this sponge is striking, however, it functions to create a flow of water through the animal which allows it to filter out small plankton and bacteria as the water passes through it.