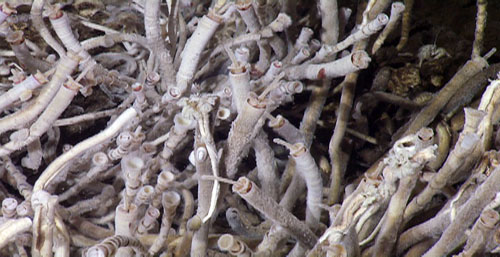 We found beautiful clumps of vent tubeworms today. There are two species of tubeworms in this photo, Escarpia, with the white “spear” poking out of its tube, and Lamellibrachia, with trumpet-like segments on its tube. They both harbor symbiotic bacteria in a special structure called a trophosome at the end of their body, tucked down at the base of their tube. Many other species call this forest of tubeworms home, like the small limpets that resemble Chinese hats and white serpulid worms that resemble feather dusters.

Today we descended again to Pinkie’s Vent for two remotely operated vehicle (ROV) dives to sample discrete patches of tubeworms. We explored two new features that were prominent on the one-meter bathymetric surveys collected by the mapping autonomous underwater vehicle (AUV). The first feature was a mound several meters high that had an expansive bacterial mat with tubeworms and clams scattered on top. The most impressive features here were the tracks in the mud made by the clams traveling around the site in search of hydrogen sulfide to keep their bacterial symbionts happy, and thereby keep themselves healthy. Who knew a clam could move so far? 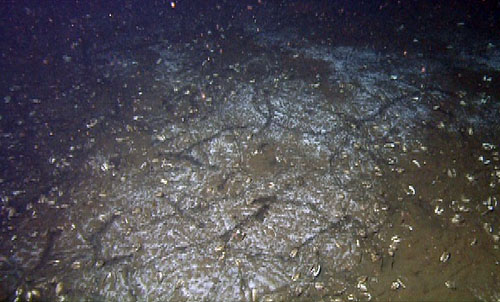 These dark tracks through the white bacterial mat are made by clams moving through the area looking for high concentrations of hydrogen sulfide in the sediment.

On the map, the second feature was a mound, 30 meters (98 feet) in diameter, with a crater shape at the center of it. The ROV traversed up the side of this mound and we discovered an extensive chemosynthetic community surrounding a large fissure, or cave, greater than two meters (6.5 feet) deep. There were tubeworms attached to the walls and dense bacterial mats coating the steep sides.

Fissures are not something you would expect to see on this generally flat, muddy seafloor where we are diving. The mound could have been formed by expansion of the seafloor from tectonic activity or precipitation of hydrate below the surface. Expansion of the seafloor presumably cracks open the seafloor and leaves these open fissures. Or perhaps over time chunks of carbonate floated away on gas hydrate formations, ultimately forming this cave. It may have been a combination of these events that caused the formation of this cave.

The in situ ultraviolet spectrophotometer (ISUS) recorded the highest sulfide concentrations that we have measured on this cruise when placed at the opening to this cave. We flew the vehicle in swaths over the top of the mound and recorded the images on high-definition video. The video will be used to create an image mosaic of this mound, since it was too large to visualize on one frame of video. Before leaving the seafloor, we sampled the carbonate outcrops just above the cave in order to date them and determine when the structure formed. 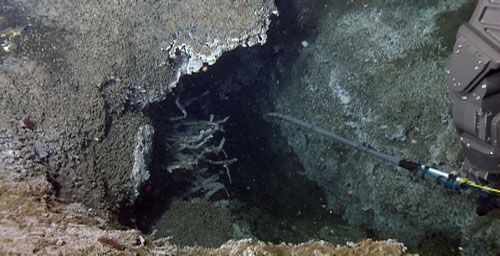 The ISUS instrument, held by the manipulator arm, measures sulfide coming out of this deep cave, newly named Jackson Hole. Tubeworms can be seen on the left inside the cave with bacterial mats all over the walls. The white edge at the top is carbonate rock outcrop and old clam shells. 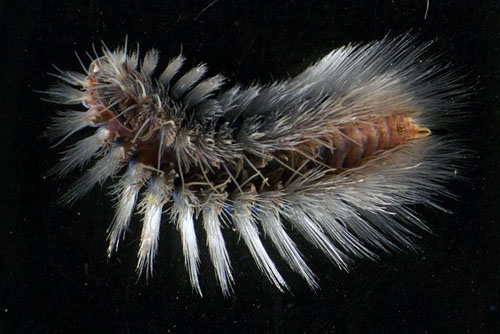 This beautiful, fuzzy polychaete worm called Archinome is commonly found at vent sites world-wide and resembles a fuzzy caterpillar found in the backyard. We collected a number of these worms today and they seem to be in two distinct colors, purple and pink. Photo by Greg Rouse. 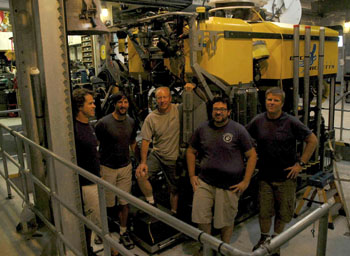