Today’s dive started a little later than normal because high winds created choppy seas and difficult launching conditions for the remotely operated vehicle (ROV) Doc Ricketts. Once the seas calmed, the ROV was launched and another day was spent exploring seafloor rocks, animals, and chemistry around Pinkie’s Vent in 1,600 meters (5,250 feet) of water. 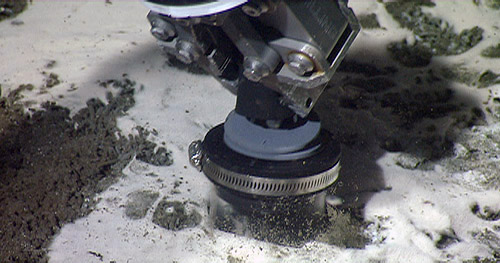 In the afternoon a spectacular example of exposed gas hydrate was discovered, forming on the edge of a carbonate outcrop and surrounded by bubbling gas. This event exposed the interdisciplinary nature of this expedition, as geologists, biologists, and chemists worked together to understand how the regional geology and tectonics could have caused reduced chemicals, such as methane and sulfide, to accumulate in the seafloor. These biogeochemical processes set the foundation for the diverse biological communities we saw today. The event also challenged the skill and patience of ROV pilots Knute Brekke and Eric Martin, who had to deal with several excited scientists, all wanting different things at the same time!

Near the Pinkie’s Vent site today, we were all mesmerized by the beautiful carbonate formations, with their deep fissures, huge outcrops, and etched surfaces. They were so dramatic that we had to agree with Charlie Paull’s statement in the control room—if these were terrestrial rock formations, they would be preserved in a National Park, like the beautiful rocks at Pinnacles National Monument in Monterey County, California. 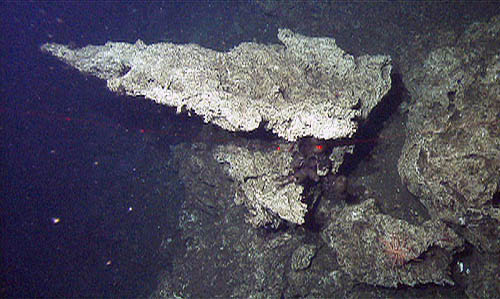 This large, dramatic carbonate outcrop reminded us of a jet. You can get an idea of the size of the outcrop by considering that the red dots (laser beams from the ROV) are about 30 centimeters (one foot) apart.

This begs the question, how can people protect the deep sea and pelagic environments that cover over two-thirds of our earth’s surface, when we have yet to explore 99 percent of these habitats? How can we plan protection, conservation, even restoration for an area we know so little about? Most people think that these areas are so deep and so far away, how can humans be changing environments that are three miles deep, or in the middle of the ocean?

In actuality, everything we do on the planet affects every habitat on the planet, including the deep sea. We won’t know what impacts humans are having on the deep sea unless we have opportunities to explore this vast terrain and understand the system before it changes. Studies like ours in the Gulf of California are a vital part of this process. 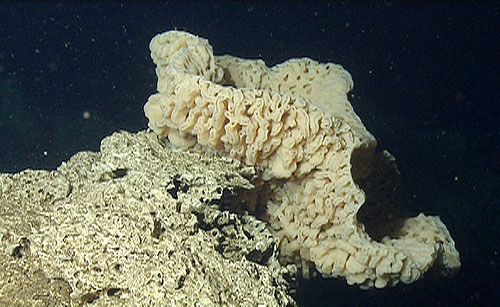 This huge sponge colony was perched on a carbonate outcrop. Many old clam shells were embedded in the surface of the rock. 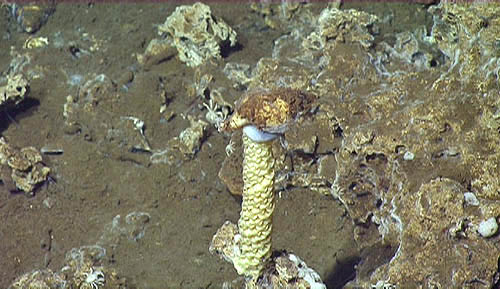 A tower of eggs

Neptunea snails attach very large egg cases to rocks and other objects on the ocean bottom. The snails are often found perched on top of an egg case full of developing snails. MBARI scientists are interested in conducting genetic analyses on the female snails and their offspring, in order to answer some basic questions: Are all the young snails in an egg case the offspring of the female who is perched at the top? Was there one male or multiple males who contributed sperm to the brood?

These questions can be answered by conducting DNA fingerprinting analyses on the snails and their brood. Highly variable genetic markers called “DNA microsatellites” are used in these analyses in the same way they are used in forensic studies and human paternity cases.

This DNA technology was developed primarily for medical and forensic applications, but it has become very useful in studies of animal breeding systems and behaviors. The development and application of these genetic technologies for studies of marine organisms has been a main focus of our efforts at MBARI.

We collected several of these snails and their egg cases today. Their DNA will also be compared with that of Neptunea snails and egg cases from Monterey Bay, to determine if we are dealing with the same species. 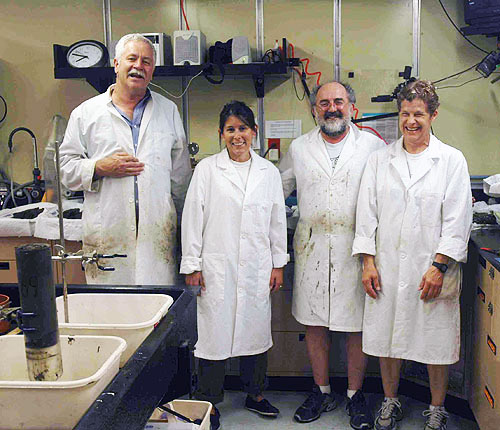