We traveled back to the northern part of the Guaymas Basin today and did two remotely operated vehicle (ROV) dives on the transform fault scarp that runs through the Gulf of California. Our first dive took us down to 1,800 meters (5,900 feet) where the ROV traversed over to the bottom of a 150-meter (490-foot) wall and ascended along this feature looking for cold seep clams and tubeworms. The wall was very steep, muddy, and had few organisms living on it. It looked like a dynamic environment—there were areas where rocks had slid down, forming scree slopes (inclines of broken rock fragments) similar to those on the sides of mountains. Along the way, we sampled tubeworms and clams for comparison to others we have sampled in the Gulf of California. We also found brachiopods, scaleworms, and a number of small limpets and snails that live amongst the clams and tubeworms.

The ROV pilots use this metal scoop (a retrofitted prospector’s bucket) to scoop up clams from the muddy seep areas. One manipulator arm is holding the box open while the other manipulator arm pours these large cold seep clams into the sampling box.

The ROV was recovered mid-day after a very successful morning collecting biological specimens. After the samples were removed, the core tubes and sampling boxes were replaced with empty ones and the ROV was re-launched about a kilometer (0.6 miles) to the northwest. This dive was also located so that the ROV would land near the base of the same northwest-southeast oriented scarp—approximately 100 meters (320 feet) tall at this site—with the goal of again transecting up this feature. However on this dive, there were geomorphic features of interest at both the base and top of the scarp that we could identify from the recently collected autonomous underwater vehcile (AUV) surveys.

On the floor of the basin almost immediately below the main scarp, a distinctive northwest-southeast oriented lineation (linear structure) seen in the bathymetry is believed to be the trace of the transform fault. In places this lineation is manifested as a narrow trough that is around 10 meters (33 feet) deep and less than 20 meters (66 feet) wide. The ROV went directly to the bottom of the trough and took both sediment cores and thermal measurements before flying through this narrow trough for 100 meters (320 feet). The floor of this trough was generally covered with a mud drape that made it difficult to see the expression of the fault. However, the trace of the fault also was observed as a one-meter-high (3.3-feet) step further along where a relatively sharp contact was seen between firm, hard, clearly older material exposed on one side and a young sediment-draped material on the other side.

After inspecting the fault, the ROV turned and flew up the major slope. The face of the scarp was again studded with blocks of talus and scattered with clam shells. Some of the talus blocks were heavily encrusted by serpulid worms. One patch of clams was sampled.

Another objective of this dive was to ground truth the nature of a distinctive rough texture that the AUV survey shows occurring on the crest of this ridge at the end of this transect.  The ROV observations show that this rough area is associated with huge blocks of carbonate-cemented sediments.  Many of these blocks were larger than automobiles, and had open cracks or fissures that separated blocks of carbonate more than two meters deep. This type of carbonate is known to form at methane venting sites. Before we had the one-meter bathymetric grids, we would spend whole dives searching for such features. We are now increasingly confident that we can use this texture to identify the occurrence of these carbonates in the AUV data, which allows the location and extent of such methane-venting sites to be identified remotely. 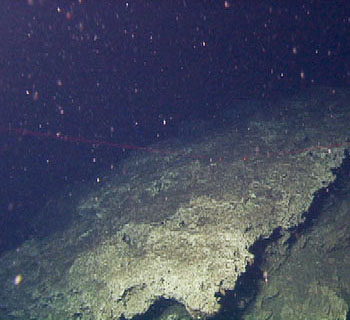 Large carbonate outcrop at the top of the fault scarp wall.l

During this cruise we are also hunting for a particular scaleworm named Bathykurila guaymasensis. They are tiny worms, measuring up to one centimeter (0.4 inches), and bacterial mats are their favorite food. The species was originally described from vents here in the Guaymas Basin in 1989 by Marian Pettibone, but no molecular information was collected back then. Later these worms were found on whale falls in Southern California. Recent molecular data from the specimens from Southern California points to two different species. Now the question we want to solve is: which of the two species is the real Bathykurila guaymasensis? We already found a few individuals, but we are still looking for more so we can compare different populations from here to those in Southern California. 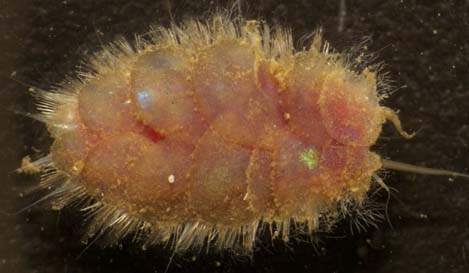 This tiny, one-centimeter-long (0.4-inch) scaleworm, Bathykurila guaymasensis, was originally described from the Guaymas Basin and feeds on bacterial mats. Photo by Greg Rouse. 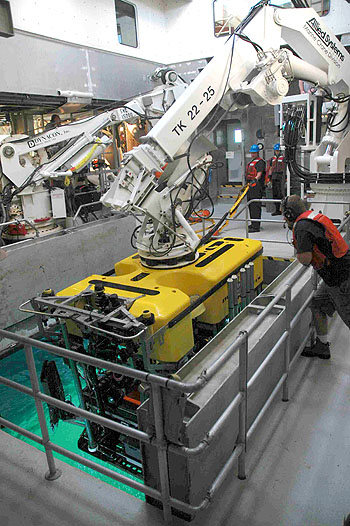 ROV Pilot Randy Prickett watches as the ROV Doc Ricketts is recovered from today’s dive. There are two cranes in the moon pool: one for handling the tether management system during the dive (back crane operated by Dan Chamberlain) and another for launch and recovery of the vehicle (front crane operated by George Gunther). Jason Jordan and Matt Noyes are recovering the tether behind the vehicle. 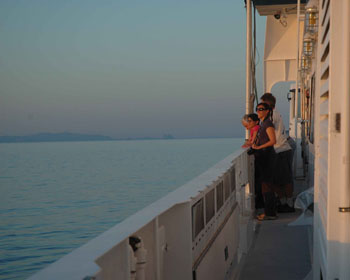 We were rewarded with beautiful weather during the sunset this evening. Everyone came out on deck to see if they could catch a glimpse of the green flash (no luck!). Sigrid Katz, Krystle Anderson, Josh Plant, and Charlie Paull on deck. 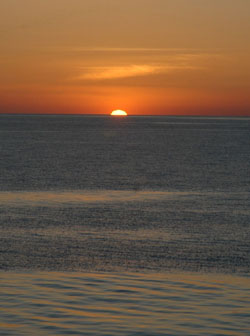 Another beautiful sunset off Baja California.