We completed two dives in the Concepción Canyon today on the western slope of the Gulf of California. One of our objectives was to locate cold seep clams that were reported here in 2003 by Gary Greene, past director of the Moss Landing Marine Laboratories and former scientist at MBARI. We collected these clams from three discrete patches in the canyon. Bob Vrijenhoek and his team will be comparing these clams and their symbionts (bacteria that provide food for their hosts by a process known as chemosynthesis) with clams from other regions in the Gulf of California collected on this expedition to determine how related they are to each other and if their chemosynthetic symbionts are specific to a particular group of clams.

We were also interested in the canyon features such as ripples, scarps, and ledges, and we took push cores and gravity cores to help us understand sediment flow in this area. This canyon has two branches that funnel down into one main canyon like a “Y.” Our first dive was at the junction where the two smaller canyons meet the main canyon. We found steep walls covered with white sponges and brittle stars. We also found the Acesta clam that we reported on yesterday. They were all over a scarp wall at 820 meters (2,700 feet) depth in very low oxygen waters (0.09 milliliters per liter). We collected these clams from two different locations in this canyon to compare with the clam we collected yesterday. 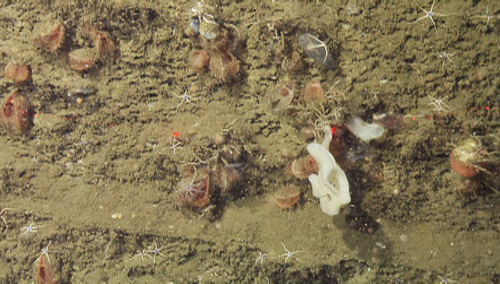 Along with sponges and brittle stars, numerous orange Acesta clams were clustered on this wall. They behave like scallops, hanging with their shells ajar, filtering the surrounding waters for small particles of food.

Today we collected an interesting worm on the wall of the canyon amongst the tubes of a lot of other worms and hydroids. It is very similar to a new species currently being described from Monterey Canyon and is in the genus, Eusyllis. After the cruise, we’ll be checking the DNA to see if it is the same species. What we discovered today for this species is that the females brood their babies attached to their bellies, and actually crawl around with them like that. In the image below, the head of the worm is to the left, and there are about 20 or so little pink worms in the picture, each with only a few segments. Once they get a bit bigger and have used up the yolk supply (the pink granules) provided by their mother, they will crawl away to start their own lives. 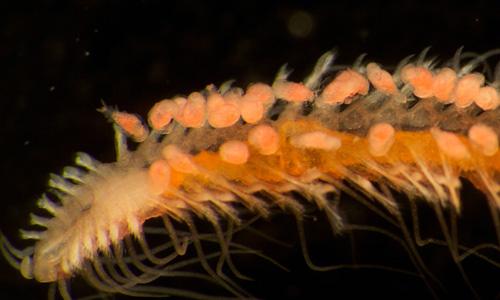 Ventral (under-side) view of a brooding polychaete worm called a syllid, about one centimeter (0.4 inches) long. 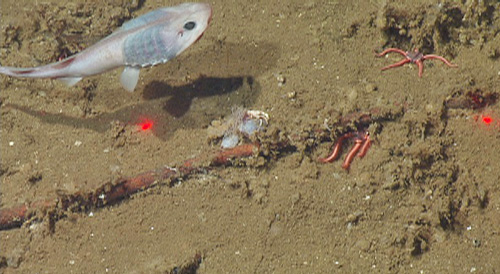 We found this small piece of wood, and collected animals living on and around it. Wood can be a source of food for microscopic animals living in food-limited environments such as the deep sea. It can also serve as a substrate for sedentary animals looking for a place to attach in a muddy environment. These small lollipop catsharks were commonly seen throughout our dive in this low-oxygen habitat. 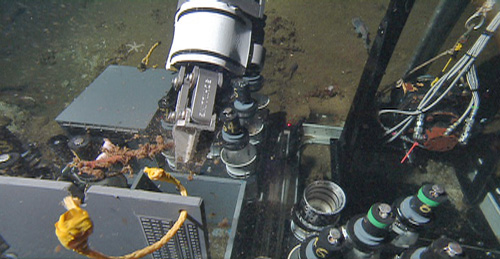 The remotely operated vehicle (ROV) has many types of samplers on its toolsled to carry samples to the surface for scientists to study onboard the ship. In the upper right is the vibracore system; the two gray boxes are for rocks or large biology samples such as clams; and the suite of small numbered tubes (lower right) are push cores for sampling sediment in different areas of the canyon. The manipulator arm is putting a small piece of wood in the sampling box.