Before sunrise, the winds picked up to 48 kilometers per hour (30 mph) delaying the launch of our first dive of the day for a short while. Up until today, the seas have been flat and the weather balmy, quite different from our spring cruises in Monterey Bay, California. This morning resembled Monterey Bay, with high winds and churned up, gray seas. It was amazing how quickly the weather changed and the pilots prepared the vehicle for launch at Site 4, an area that was surveyed with the mapping autonomous underwater vehicle (AUV) during the R/V Zephyr‘s operation in March. We dove to 1,000 meters (3,280 feet) depth to explore a large depression about 80 meters (260 feet) in diameter that we could see on our bathymetric maps. This depression in the seafloor is most likely a slide scarp from a past seafloor failure event. 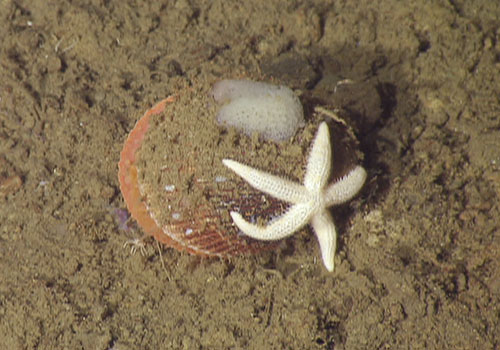 The biologists collected this beautiful Acesta clam on our first dive today. It had a sea star and encrusting sponge on its shell.

Today we observed and sampled an unusual clam belonging to the genus Acesta. It looks somewhat like a scallop, but it is unrelated. The clam appeared to sit in a flat field of soft sediments at about 1,000 meters (3,280 feet) depth. When we collected it with the remotely operated vehicle (ROV) Doc Ricketts’s robotic arm, we found that the clam was attached with byssal threads—strong, fine, silky fibers made from proteins—to a carbonate rock buried beneath a thin veneer of sediment. Acesta clams in the Pacific always seem to be attached to rocky outcroppings. 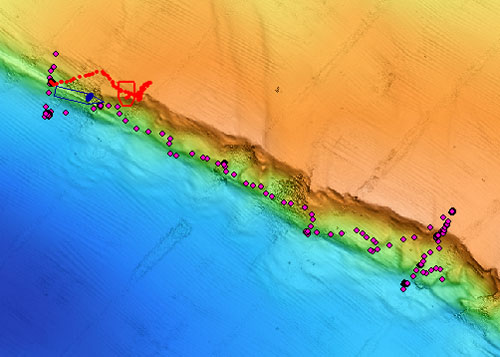 This map shows the high-resolution bathymetry of the seafloor in the area we explored today. A 50-meter-high (164-foot-high) scarp marks the main boundary between the Pacific Plate on the lower left shown in blue shades and the North American Plate on the upper right shown in orange/yellow shades. The image was produced by processing the AUV-collected data with the MB-System program which is maintained at MBARI and brought into ArcMap as a geotiff—an image embedded with spatial referencing information. The ROV’s dive track, shown in red and pink dots, is updated in real time in one-minute intervals from ArcMapNav. The R/V Western Flyer’s position is in blue. This invaluable real-time tracking tool enables us to explore these dynamic features of the seafloor.

For our second dive, we transited about 1.6 kilometers (one mile) east of the depression site to dive at 850 meters (2,800 feet) on a fault scarp. A number of cruise entries from the previous leg of this expedition have discussed types of faults here in the Gulf of California. Deep-sea faults can provide us with a wealth of information about modern faults. Terrestrial faults, like the San Andreas Fault that runs through California, have been altered by extensive human activity, erosion, floods, and silting, making them difficult to study and interpret. Most deep-sea faults are in pristine condition for analysis with geological tools and their patterns are directly applicable to other faults around the world.

Today we collected several vibracores and push cores from both sides of this fault scarp, the Pacific Plate and North American Plate, to determine the offset between the two and the age of some of the smaller features. We explored the area for some time, looking for evidence of recent activity and surveying the biological organisms that inhabit the outcrops and fields of broken rock along the scarp. 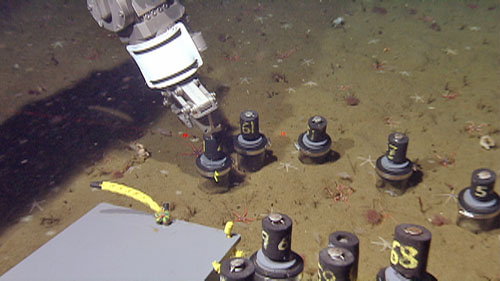 The manipulator arm taking push cores in the fault scarp region. These are used for both biological collections and geology sediment sampling. The pilots have very fine control—they can insert the push core over a small animal like the white seastar captured in the push core second from right. We’ve had a wonderful collaboration of biologists and geologists this week, sharing samples like these push cores and pitching in to help each other out. 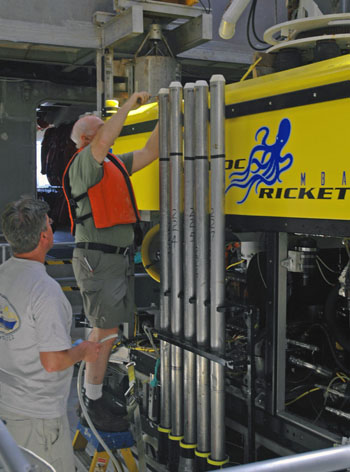 After each dive, Brian Edwards and Josh Plant work to offload and process the long vibracores from the ROV Doc Ricketts.