Overnight, we traveled to the Guaymas Basin to make two dives on the northeast side of the transform fault zone. First, we dove at Pinkie’s Site, a well-studied area with extensive methane gas vents. Peter Brewer’s team visited this site on an earlier leg of this expedition and MBARI researchers originally sampled the gas in this area during the 2003 Gulf of California Expedition. Nine years later, we returned to measure the gas composition of the methane bubbles and determine if there has been any change over the years.

Today’s dive site was rich in gas emanations from the seafloor. Most likely this gas is methane produced by bacteria. However, at the pressure and temperature conditions of this site—1,500 meters (5,000 feet) deep with a low temperature of two to three degrees Celsius (35 to 40 degrees Fahrenheit)—high concentrations of methane do not stay in the gaseous phase or dissolve in water. Instead, methane combines with molecules of water to form a solid combination of methane-water called gas hydrate. This solid accumulates in the subsurface sediment, but due to the volume expansion in the conversion to a solid phase, the surrounding sediment deforms and cracks creating fissures through which methane that is not trapped in solid form can escape before combining with the surrounding water.

The seafloor at this site had multiple locations where gas bubbles could be seen escaping from the seafloor and floating upwards into the overlying seawater forming bubble plumes. These bubbles, though small in size, contain large quantities of gas. In fact, the gas pressure in these bubbles has to at least match the seawater pressure, which at this location was 2,200 pounds per square inch. We deployed a gas sampler developed at MBARI that collects the bubbles inside an inverted funnel and diverts them into an empty cylinder.

Methane bubbles escaping from the sediment combine with seawater and acquire a coating of gas hydrate. In the picture below, bubbles coated with hydrate have accumulated on the edge of the camera lens and frame; the gas sampler is in the background. Gas measurements conducted onboard later in the day confirmed that this was nearly pure methane with traces of ethane and propane.

A bird’s eye view of the gas sampler (held by manipulator arm) as it catches bubbles to measure gas composition at this site. The high-definition camera caught gas-hydrate coated bubbles on its housing.

We relocated to a site 1.6 kilometers (one mile) north of Pinkie’s Vent to do another dive in the afternoon. This site was chosen because the autonomous underwater vehicle (AUV) bathymetric surveys collected last month from the R/V Zephyr showed an approximately 15-meter-high by 100-meter-wide (50-foot by 330-foot) mound which has a distinctive rough surface texture characteristic of seafloor gas venting areas. It proved to be a fascinating site with large blocks of beautiful carbonate rock cut by meters-deep fissures, large patches of white bacterial mats, numerous thickets of tubeworms, beds of clams, and lots of other animals, which were sampled.

When one push core was taken, gas was observed to gush out of the bottom and pieces of gas hydrate were seen floating away. Although this push core was put back in the core holder in the rack of the remotely operated vehicle (ROV), it floated away before the ROV was recovered, an indication it contained considerable amounts of gas and/or gas hydrate.

The exposed carbonates we saw were formed within the sediments at shallow sub-bottom depths and are associated with methane-rich seafloor sites. Methane and sulfate do not both occur in most marine sediments. However, in methane-rich seafloor environments, methane moving upwards encounters sulfate diffusing downward from the overlying seawater, and microbes utilize the sulfate to oxidize the methane to obtain energy. As a byproduct they exhaust bicarbonate and hydrogen sulfide, both of which have profound effects on the environment. The increased bicarbonate in the pore waters stimulates the precipitation of carbonate into rocks. The sulfide can diffuse to the seafloor, where it is used as an energy source by the chemosynthetic organisms like the worms and clams we collected. This dive was a great illustration of the combined impact of geological, chemical, and biological processes on the seafloor. All the scientists were excited! 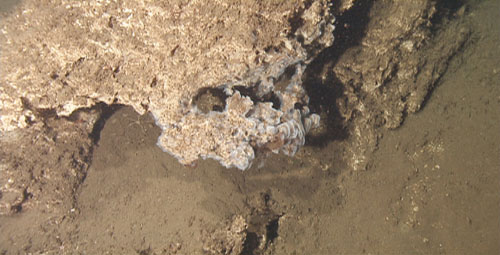 The carbonate in this area formed interesting outcroppings like this one covered with white bacteria.

Today we hit the tubeworm jackpot! Our goal was to find patches of vestimentiferan tubeworms that aggregate in bush-like clumps. Two species of tubeworms live together in these clumps. One species, Escarpia spicata, makes long, straight tubes and has a spike about 12 millimeters (half-inch) long at its front end. The second species, Lamellibrachia barhami, lacks the spike and makes a curlier tube with periodic “flutes” that look like the end of a clarinet. The tubes are made of chitin, the same material that makes up a crab’s shell. The worms have no mouths or guts; instead, they have a structure called the trophosome, which houses a very large colony of bacteria. The bacteria are symbionts, providing food for their worm hosts by a process known as chemosynthesis. It is similar to photosynthesis, but instead of using sunlight as a source of power, chemosynthesis uses chemicals released from the gas seeps found in the Gulf of California. The worms absorb hydrogen sulfide gas from the seeping fluids and deliver it through their blood to the trophosome and bacteria. They also use their blood to deliver carbon dioxide absorbed from ocean water to their bacteria. The bacteria then use the two gases to convert the carbon dioxide into sugar, their source of nutrition. In turn, the worms benefit from nutrients that leak from the bacteria. Together these symbiotic partners thrive in deep-sea environments without sunlight.

We sampled two discrete clumps of tubeworms, taken about 1.6 kilometers (one mile) apart at seeps along different walls of the Guaymas Transform Fault. This fault system eventually ducks under California and emerges as part of the San Andreas Fault system. The reason we are seeking discrete clumps of these worms is that we want to know whether the bacterial symbionts differ among different clumps that grow in slightly different environmental patches. The geologists and chemists onboard are simultaneously getting information on the chemical environment associated with these worm patches. For the answer, we will have to wait to conduct genetic and chemical analyses when we get back to our laboratories at MBARI and elsewhere. For now, we just have to wonder why some patches have many large worms and others have very small worms. 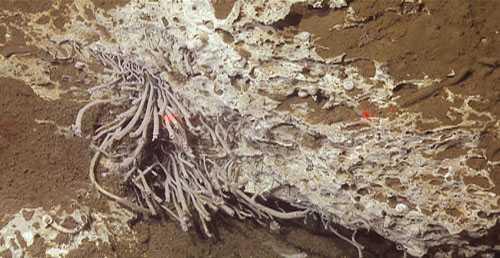 Tubeworms sampled from a carbonate fissure area. We also spotted a number of interesting gastropods and galatheid crabs along this overhang. 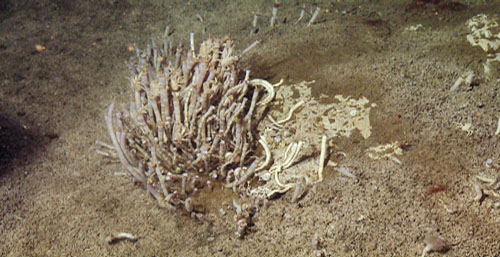 Galatheid crabs crowd the tops of these tubeworms as we prepare to sample the worms. These tubeworm clumps provide habitat to a whole suite of encrusting and mobile organisms. 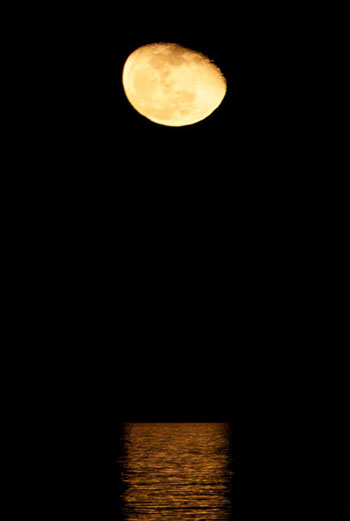 We took a break from processing samples last night to enjoy this beautiful view of the moon rising over the Gulf of California. Photo by Greg Rouse.