Today, one of our goals was to search for chemosynthetic biological communities existing on the reduced chemicals (such as sulfide) delivered to the seafloor via vents and seeps. Previous discoveries of fluid vents, sulfur-rich bacterial mats, and clam shells during Peter Brewer’s leg of this expedition last month suggested that there might be chemosynthetic communities in the Carmen Basin. So off we went to the seafloor 2,700 meters (8,860 feet) below the surface to conduct more comprehensive sampling. The remotely operated vehicle (ROV) Doc Ricketts was loaded down with a heat-flow probe, push cores, vibracores, a suction sampler, a temperature sensor, and the in situ ultraviolet spectrophotometer (ISUS). (Read descriptions of these tools on the equipment list to the right.) 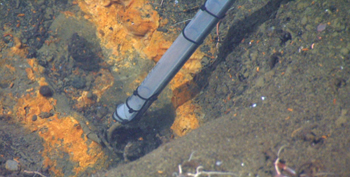 The in situ ultraviolet spectrophotometer (ISUS) measures sulfide at a venting site.

We located two vents during the dive—one previously discovered in March and one new vent—and sampled extensively around both sites. The previously located vent appeared to have ceased flowing since March. We observed vigorous flow from the other. The “sniffer,” a wand that gathers seawater and pumps it to the ISUS mounted to the frame of ROV Doc Ricketts, determined the sulfide concentration of the water. The sniffer showed that the vent we discovered was emitting fluid several degrees warmer than the ambient seawater and had a slightly elevated sulfide concentration. You can see in the picture above that the vent is lined by thick, beautiful, orange bacterial mats, apparently rich in sulfur. In the figure below, the spike in the time plots for sulfide (blue line) and temperature (red line) indicate the time when the chemical sniffer was sampling the venting fluid (see plots below). Sediment cores and biological samples will further characterize these features. 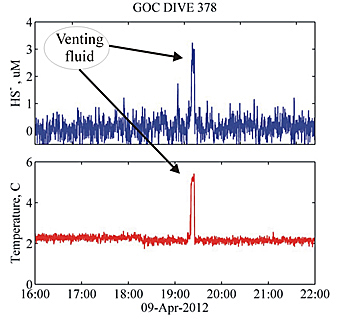 Real-time measurements of sulfide (blue) and temperature (red) at the vent we sampled today.

After sampling these two sites we searched for other chemosynthetic communities with no luck. However, during these transects a number of poorly known benthic organisms were sampled. The skills of the ROV pilots and crew of the Western Flyer again made the dive a great success.

Yesterday we dove in a low-oxygen environment with no epifaunal animals and today was quite the opposite. When we reached the seafloor at 2,700 meters (8,860 feet), the first thing we noticed was how abundant and diverse the organisms were at this site compared to the Alfonso Basin site. We found several species of sea cucumbers, huge numbers of brittle stars, and a surprising abundance of white acorn worms. These animals are very interesting and little is known about their reproductive biology. A number of the animals we collected today were carrying large—greater than 1 millimeter (.04 inches) in diameter—eggs in their “lips.” The eggs float when they are released from the acorn worm’s body. To learn more about these strange and beautiful creatures, visit this article featured on MBARI’s website last fall. 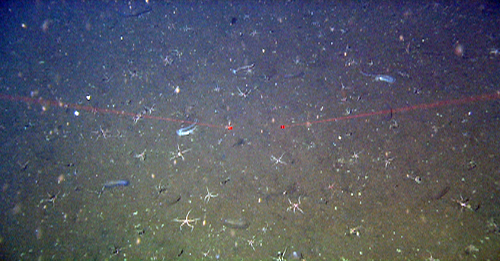 A frame grab showing the large numbers of brittle stars and other organisms on the seafloor. 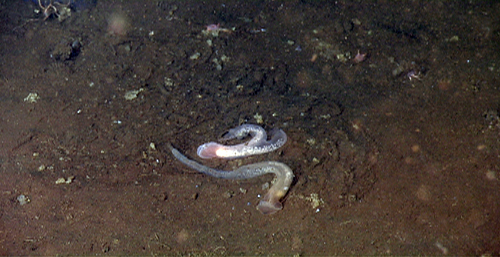 Two acorn worms spiraling around each other on the mud; the white eggs are visible just inside their transparent bodies. These most likely belong to a new species. When a new species is described, scientists choose a single specimen, usually in excellent condition, to base their description on. We collected a beautiful specimen that will serve as the holotype when this organism is described and deposited in a museum. 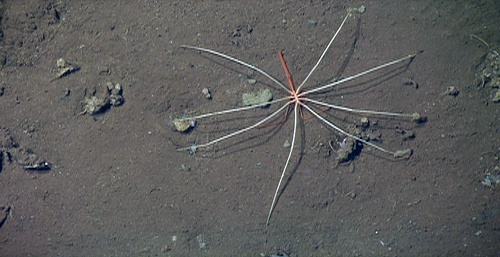 We saw a number of these large sea spiders, or pycnogonids, lumbering across the seafloor. In 2010, MBARI researchers published their novel observations on sea spiders.