Today we had a short 55-kilometer (34-mile) transit to the northern part of Alfonso Basin, in the greater La Paz embayment off southern Baja California. We visited a site that our collaborator Juan Carlos Herguera has been sampling for the past 15 years. He has taken numerous types of sediment cores from different ships, but has never viewed the seafloor at this study site as we were able to do today with the remotely operated vehicle’s (ROV) video cameras. 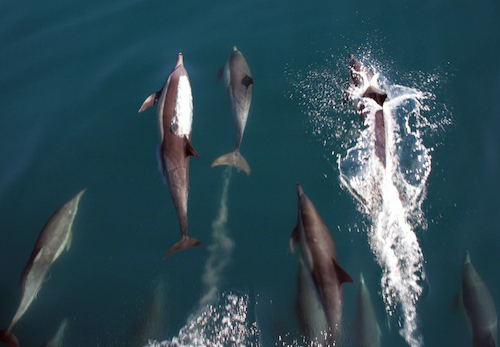 A number of dolphins swimming in our bow wave provided the in-transit entertainment this morning.

The bay is around 450 meters (1,475 feet) deep and bathed at depth by extremely oxygen-depleted waters that are part of the broad oxygen minimum zone (OMZ) beginning at 100 meters (328 feet) deep and extending all the way to the seafloor. During today’s dive, we measured oxygen concentrations as low as 0.04 milliliters per liter at 400 meters (1,300 feet). Even with such low oxygen in the surrounding seawater, we observed a number of fish, squid, and shrimp actively swimming within this oxygen-depleted benthic boundary layer. However, we didn’t see any epifaunal macro-organisms, the large animals that live on the seafloor. 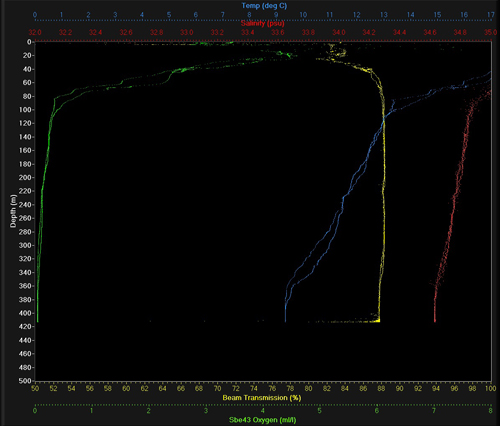 Conductivity, temperature, and depth (CTD) profile for our dive site in Alfonso Basin with depth increasing along the left side of the plot. The green trace is the oxygen concentration in milliliters per liter (ml/l). The oxygen minimum zone is between 100 to 420 meters (330 to 1,400 feet) where oxygen values are less than 0.5 ml/l.

We ran two 200-meter-long (650-foot-long) video transects to characterize the seafloor and confirm that we weren’t missing some of these important organisms. Sure enough, we didn’t find any (no brittle stars, sea cucumbers, or worms), not even the traces of benthic organisms that we commonly see on the seafloor such as tracks, trails, and burrows. The desert-like appearance at the bottom of this small basin was in a way analogous to the dry, terrestrial landscape we could see surrounding the bay. The contrast with the shallow surface ocean layer teeming with life can only be explained by the great hostility of these oxygen-depleted waters to most forms of life we know in the deep.

However, we found a number of large bacterial mats. These large white, orange, and gray mats may indicate the site of dead and decaying organisms on the seafloor. Since there are no epifaunal macro-organisms to scavenge the dead organisms, the bacteria and small, microscopic infaunal species (microorganisms that burrow into the seafloor or seafloor deposits) may have these nutrient-rich food falls to themselves. 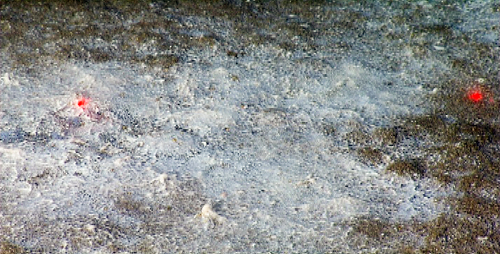 Close-up frame grab of a large, white bacterial mat. The two red dots are lasers shining from the ROV. At 29 centimeters (11.4 inches) apart, these lasers help the scientists scale objects in the video images.

We collected six vibracores and a number of push cores to compare with Juan Carlos’s historical samples. These samples will further help to characterize the sedimentation of this basin over time and how consistent these patterns are over a few thousand meters distance. One of the vibracores we collected today was 193 centimeters (76 inches) long and will probably illustrate conditions in this basin for the past 7,000 years.

The biologists processed four push cores that were taken from large white bacterial mats. We rinsed the top 10 centimeters of each core and studied the epifaunal organisms under the microscope. We found filamentous bacteria, nematodes, a huge diversity of forams, and at least three different species of pteropods. 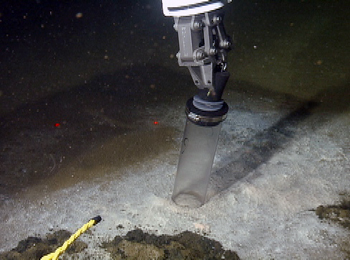 The ROV’s manipulator arm taking a push core sample in the middle of a large white bacterial mat.

This low-oxygen seafloor in the Gulf of California might give us a glimpse into the future of our coastal oceans. Many studies have determined that with the increase of carbon dioxide in surface waters, oxygen minimum zones are expanding in coastal areas. If this trend persists, scientists will likely encounter more and more of these “dead zones” on the seafloor where very few organisms can survive. 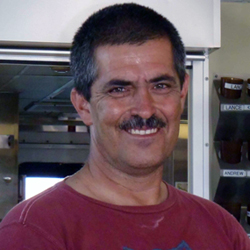 Paulino Perez Gonzalez is our shoreside support when the R/V Western Flyer is in port in La Paz. He has been a valuable assistant to the crew members who prepare the ship for the next leg of the expedition while we are in port. In addition, he studied marine biology and leads tours of marine mammals along the Pacific coast from Baja to Alaska.