The R/V Western Flyer is on its way to dock in La Paz today after a successful cruise. It is time to describe the overall cruise effort.

Leg 5 of the Western Flyer’s expedition and legs 1, 2, and 3 of the Zephyr’s focused on exploring the transform margin in the Gulf of California seafloor. This transform margin is where the Pacific Plate is slipping by the North American Plate along a strike-slip fault (similar to the San Andreas). Our goal was to have a coordinated program using two of MBARI’s research vessels. The Zephyrwould conduct autonomous underwater vehicle (AUV) surveys to map the seafloor at specific sites where a fault or fault zone is associated with the plate margin, followed by the Western Flyer and remotely operated vehicle (ROV) video surveys to visually confirm the seafloor features seen on the AUV maps.

Luckily, the AUV team was in the process of finishing the surveys we needed as our leg of the expedition got underway. The Western Flyer rendezvoused with the Zephyr at sea and the AUV team handed over the data from AUV surveys critical for the success of the expedition. The very next morning we were able to use these data to find the best site for our ROV dive—just in time to allow us to fulfill our initial objectives. This was a testimony to the hard work of the AUV crew and MBARI’s ability to coordinate coupled AUV and ROV operations.

Data from the nine AUV surveys conducted from the Zephyr in the Gulf of California show the shape of the seafloor in unprecedented detail. Without these data we would not have known where the faults were. In retrospect, it is unlikely we could have identified them based solely on exploration with the ROV. However, the ROV diving provided the other critical information: visual observations and sampling.

Each AUV survey covered a relatively small section of seafloor, for example six square kilometers (3.7 square miles), and resulted in bathymetric maps at a one-meter (three-foot) grid resolution. In practical terms this means that the maps are an accurate rendition of the seafloor based on the average depth of each square meter within the survey area to a relative depth resolution of about 15 centimeters (six inches). Previously the best available maps made from surface vessels were made with a grid resolution no less than 10 meters (33 feet), and frequently with more than 25-meter (82-foot) grid resolution, with a depth resolution of about five meters (16.5 feet). Thus, while the general shape of the seafloor was known from previously available surface vessel maps, no one had ever seen the seafloor in these areas with the level of detail provided by these AUV surveys.

In addition to the bathymetric maps, the AUV also collected Chirp seismic reflection profiles for images of the sub-bottom structure or cross-sectional images of the seafloor. The profiles show layers within the sub-bottom sediment. Originally these layers were deposited as continuous horizontal beds. However, the layers were deformed within the fault zones, so the profiles show offsets and truncation of layers, juxtaposition of very different rock types, and folding of strata. In places these strata are exposed on the seafloor.

The exact location where the main plate margin fault crosses the seafloor could be determined within just a few meters. In some places, it was associated with scarps that are from a few centimeters to tens of meters high. In other areas, the main fault forms a trough that is 10 or more meters (33 or more feet) deeper than the surrounding seafloor. In most areas the appearance of the seafloor and immediate subsurface was dramatically different on the two adjacent sides of the fault, which testifies to the extent of lateral movements along the fault. Occasionally, relatively distinct morphologic features were seen on both sides of the fault that appeared to have been cut apart by the fault and offset by a few kilometers (a mile or two). Much of our sampling was focused on documenting the nature of these offsets. The results of the sampling will only be known after the expedition when laboratory measurements are made.

We were also interested in investigating the nature of the movements along the fault. For instance, while we know that the movements between these two plates is on the order of eight centimeters (three inches) per year, we do not know whether this occurs as a continuous creep or in larger episodic ruptures. Making observations about this requires seeing the seafloor and being able to take samples based on the visual observations. While not yet definitively documented, we saw no evidence for continuous creep and ample evidence of previous ruptures.

One thing that surprised us was how little recent sediment cover there was in many of these survey areas. Most of the seafloor was bare of sediment and likely to be associated with slow, but ongoing erosion.

On the next leg we will focus on areas where there are geomorphic features on the AUV maps of the seafloor that suggest fluid venting or seepage. 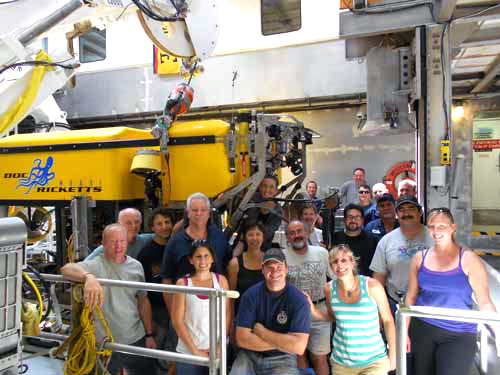 The science team, ROV pilots, and many members of the ship’s crew gathered around the ROV for a final group photo as the ship was steaming to port.