Day 9: Stuck in the middle with you

Today, we had two dives near yesterday’s dive sites. One of these dives was again in the 30-meter-deep (100-foot-deep) trough that separates the North American and Pacific Plates. In some places this trough is only three or four meters (10 to 13 feet) across. We flew the remotely operated vehicle (ROV) along the base of the trough, periodically bumping into the sides—which are on different tectonic plates—sampling with push cores and vibracores along the way. This is a continued effort to sample both sides of the fault to look at distinctions in the age and deformation of materials across the fault. We were also looking for an indication of fluid flow, but did not find any. We took five more thermal measurements in the uppermost meter of the sediment. These measurements confirm that there is a much higher temperature gradient in the fault zone than there is away from the fault.

The fault trough that we surveyed today would be impossible to find using surface-ship tools. Without the high resolution multi-beam data collected by our autonomous underwater vehicle (AUV), we never would have found the trough made by the slipping plates. This fault is similar to the San Andreas Fault in its size and movement, but little is known about it. In contrast, literally hundreds of geologists study the San Andreas Fault (which is very close to where MBARI sits on the Monterey Bay). We’ve looked at a few hundred meters of this fault over the last week. We are merely scratching the surface of understanding how this fault moves and how it deforms the seafloor. 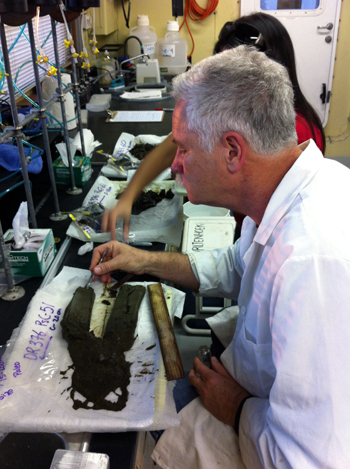 In the ship’s wet lab we often extrude the sediment from the push cores, put them on a labeled tray, cut them in half, and photograph them. Charlie Paull is examining the layers present in one of the cores.

On this leg of the expedition, we have biologists who can take advantage of some of the geology samples to look for bycatch. Today, Shannon Johnson found some animals on rocks that were very interesting to her!

This limpet was attached to one of the rocks collected by the geologists on board. The biologists were happy to find this by-catch.

Rocks aren’t just interesting in their own right; sometimes they have beautiful organisms stuck to them. We were able to collect several polychaete worms, brachiopods, an anemone covered in bryozoan, and fissurellid limpets from the surface of rock samples. We also found a cluster of trochid gastropods, which are probably an undescribed genus and species usually found at seeps. Today’s find was exciting because we did not find evidence of chemosynthetic environments. This has ecological implications in that animals that were once thought to be “vent or seep endemic” may also reside in alternative habitats. 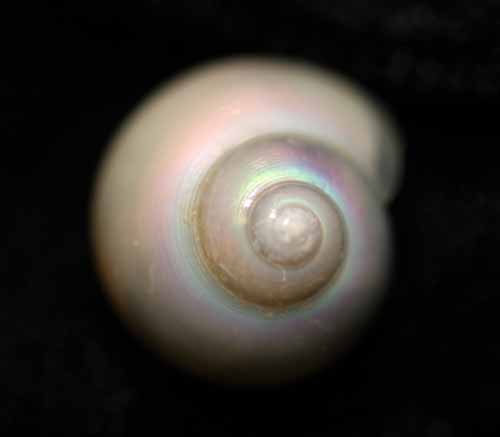 A microscope picture of one of the snails we collected today.