Day 8: Shaking in the fault

Today we dove the remotely operated vehicle (ROV) Doc Ricketts to a depth of 1,750 meters (5,740 feet) into a long linear trough 35 meters (114 feet) deep and only 15 meters (50 feet) wide at its base. This was barely wide enough for the ROV to turn around without banging into the sides of the trough. This trough is part of a series of faults that form the boundary between the North American and Pacific Plates. If one were to follow this plate margin to the north, it ultimately connects with the San Andreas Fault.

The pilots flew the ROV down one side of the fault trough, sampled the floor of the trough, and then flew back up the other side. While on the trough floor, we collected vibracore samples and sediment temperature data. The sediment temperatures were taken with a tool called a heat-flow probe which is inserted into the sediments and measures temperature at a series of subsurface levels. From these measurements the rate of temperature increase with depth can be measured. At the sites along the fault, the temperature gradients we measured were much higher than normal, suggesting that warm waters were moving up through the sediment. 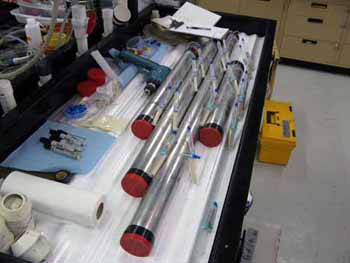 Syringes and tubing are inserted into today’s vibracores in order to extract the pore water from within the sediment samples. 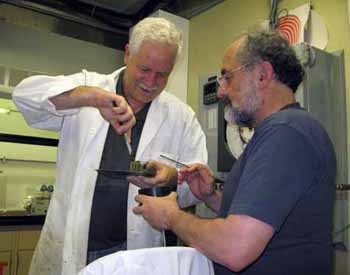 When the ROV was down in the fault trough, we could compare the sonar image from the ROV (left) with maps made from data collected by the autonomous underwater vehicle (AUV) D. Allan B (right). The alignment of the two images was nearly perfect.

We want to introduce you to the rest of the crew of the Western Flyer. Running a research vessel is complicated; a research vessel has many functions that vary according to each team’s scientific mission. The people who run the ship are responsible for sophisticated machinery that supports activities such as ROV operations, scuba diving, and CTD casts, in addition to the day-to-day life of as many as 26 people at sea for up to 10 days at a time. 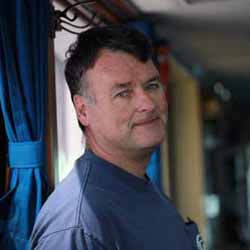 Master Ian Young
Ian has been at MBARI since 1999 and has served as master (or captain) of both the R/V Point Lobos and the R/V Western Flyer. He grew up on the water on Cape Cod and sailed through his first hurricane at the age of 16 on a 51-foot aluminum sloop. Ian graduated from the Merchant Marine Academy in Kings Point, New York. He works hard to ensure science missions are safe and successful. 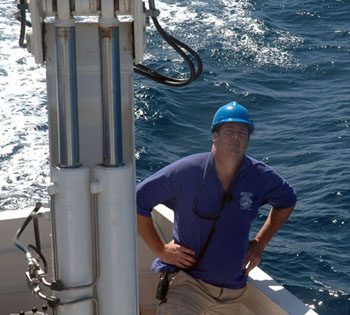 First Mate George Gunther
George has only been at MBARI for a few years but he has been a sailor all his life. After serving in the Coast Guard as a quarter master, he worked on a variety of ships, serving as captain of the Seward Johnsons I and II, and the R/V Sea Diver for Harbor Branch Oceanographic Institute. He has also worked for the Bermuda Institute of Ocean Sciences (BIOS). George likes working with scientists and finds working on research vessels more interesting than working on other types of ships. 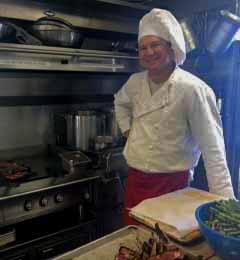 Relief Steward Eric Fitzgerald
Eric, the dock foreman at MBARI, is relieving Patrick Mitts as steward for this leg of the expedition. Eric’s experience as a dive master, chef, ocean rescue worker, safety manager for the hyperbaric chamber rescue, and firefighter has prepared him beautifully for his position at MBARI. Eric has worked on and around boats for years: fishing for lobster in Maine and working on dive boats. He loves his job because it is so diverse and extreme, and encompasses skills from all his past work history. 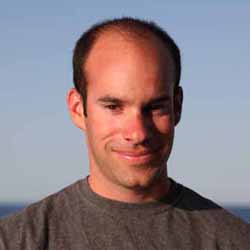 Relief Second Mate Cole Davis
Cole grew up in Monterey racing sailboats, but he was really inspired by the movie, “The Life Aquatic” with Bill Murray. Cole’s father worked for Jacques Cousteau as an underwater photographer. During college, Cole worked with autonomous underwater vehicles for the Naval Postgraduate School, and then decided to go to the California Maritime Academy. From there he joined the Maritime Union and started working on oil and bulk tankers as a third officer. 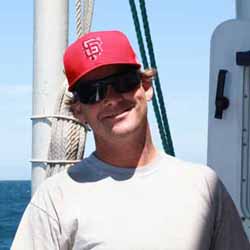 Relief Able-bodied Seaman Craig Heihn
Craig started his marine career crab fishing in Alaska, then went on to offshore lightering. Lightering is the transfer of cargo between vessels of different sizes, for example offloading cargo from a barge or tanker to a smaller ship. Craig also worked on supply boats in offshore oil fields, and on long-haul, ocean-class tugboats which took him all over the world. Although the Western Flyer is much smaller than boats he usually works on, Craig likes being involved with the science and the scientists.