Day 7: A view into the engine room

Today’s science mission was focused on continuing to sample both sides of a fault in order to reconstruct the evolutionary history of the seafloor. We didn’t see as many dramatic carbonate outcrops as yesterday, but we did see some gigantic sea cucumbers—at least 60 centimeters (two feet) long—and seastars galore. The vibracores were also very successful and penetrated deep into the gooey sediment. We observed that the mud jiggled like flan while the cores were taken.

We’d like to introduce you to the people who keep the ship running: the engineers. It takes a well-oiled team to keep all systems working on the Western Flyer during this 97-day expedition. Lance Wardle, Matt Noyes, Olin Jordan, and Jason Jordan keep the engines, motors, plumbing, electrical, sewage and water processes, and the Umbilical Handling System working. 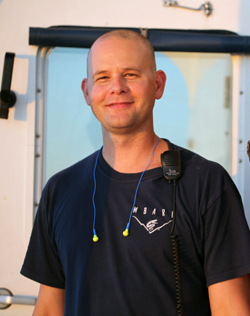 Matt earned a B.A. in marine science from the University of California, Santa Cruz, then heard about the California Maritime Academy (CMA) and went there for a tour. He liked the idea of working on the ocean in a different capacity, so he enrolled in the academy and earned a B.S. degree. Matt came to MBARI fresh out of CMA, and he has now been at MBARI for 13 years. The most challenging part of working on the Western Flyer is that it is such a mechanically complex ship. The vessel continually poses unexpected challenges, and almost every day Matt has to fix something in a safe and timely manner. 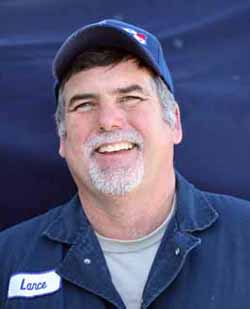 Lance is no stranger to adventure. Prior to working at MBARI, he was a highway patrolman and was awarded a medal of valor from the governor for pulling a man from a burning vehicle just before it exploded. Lance was hired as relief crew on the R/V Point Lobos. He then moved on to the engineering department on the Western Flyer and eventually worked his way up to his current position. Lance enjoys the challenge of the Western Flyer; it is more complex and has more systems than many larger ships. Lance feels he learns something new every day from his colleagues at MBARI, and he appreciates their support for him as he progressed from oiler to chief engineer. 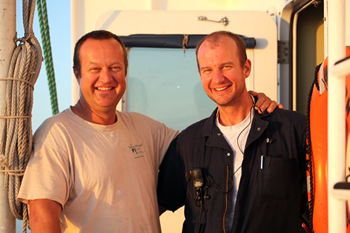 Olin Jordan, our second engineer, and his brother, Jason, owned a residential construction and development business for 20 years prior to working at MBARI. Olin started as a relief deckhand on the R/V Zephyr, then worked as a deckhand on the R/V Point Lobos before finally moving on to theWestern Flyer as an oiler. Olin most likes the progressive aspect of MBARI’s work environment. The most difficult aspect of the job, he said, is being away from home—97 days straight on this trip! Olin has been working with boats for over 15 years, and has been living on a boat for the past five years. He makes his second home outside of Stockholm, Sweden, where he frequently visits his parents.

Jason Jordan has worked as a relief oiler for over a year. Jason likes being on the ocean, and finds the science interesting. He says that working on boats is like fixing houses on the water, especially this ship with its plumbing and electrical systems. Jason has lived on a 41-foot boat in Moss Landing with his family for eight years. Jason has traveled extensively in Europe and the US, and, like his brother, Olin, spends a lot of time in Sweden. 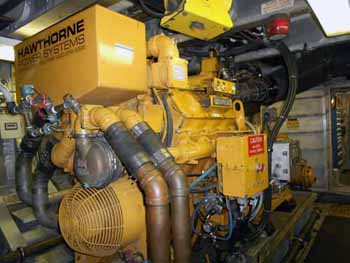 One of the Western Flyer’s engines that the engineers keep running smoothly day in and day out. 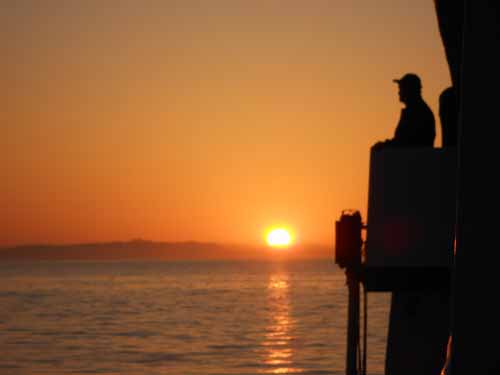 Lance Wardle enjoying one of the perks of working at sea.