Genome sequences to date:
To date five Prasinophyceae genomes have been completely sequenced, all within the order Mamiellales. An overview of the phylogeny of Mamiellales within the context of the Prasinophytae can be found in the work of Guillou et al. (2004). Two strains from Micromonas have been completely sequenced as have three from the genus Ostreococcus. Two of these strains probably represent more coastal Ostreococcus while strain RCC141 which was sequenced at the Joint Genome Institute is probably more of an open-ocean strain. Currently, RCC141 has been defined as a low-light strain (Rodriguez et al. 2005) and considered akin to the ecotypes of Prochlorococcus which cannot grow at surface irradiances (e.g. Moore et al. 1998). However, this Ostreococcus clade (O_II Fig 1) is frequently found in surface waters of the open ocean (e.g. Worden 2006, Demir et al. 2010) and thus the culture based observations may not be fully relevant to growth in the natural environment. In 2011, we published a partial genome sequence of Bathycoccus another member of the Mamiellales, and used this sequence to investigate viral-phytoplankton commonalities. 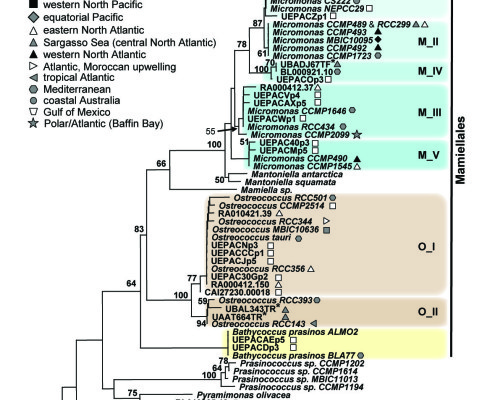 About the Organisms (with completed genomes):

Micromonas Overview: Micromonas is a eukaryotic, photosynthetic microorganism found throughout marine ecosystems – from polar waters to the tropics. It is classified as a member of the picophytoplankton because of its small size (< 2 mm in diameter). Picophytoplankton are known to be important to primary production, but the individual contributions of each of the different groups, or species (with Micromonas being one of those), aren’t well known. To date, Micromonas strains have been described as belonging to a single species. Micromonas pusilla was reported as early as 1951 to be highly abundant in marine systems (Knight-Jones & Walne 1951). However, it is likely that the designation Micromonas pusilla harbors several different (cryptic) species (Slapeta et al. 2006, Worden 2006). This was first realized through phylogenetic analysis of 18S rRNA gene sequences (Fig 1) as well as other markers. The two strains that have had their genomes sequenced belong to different clades. Micromonas is a fast swimmer and, unlike many members of the Prasinophyceae, does not have scales on its cell surface.

Micromonas strain RCC299 (also known as NOUM17) was chosen for complete genome sequencing because it was isolated from tropical waters (equatorial Pacific) in contrast to another sequenced strain CCMP1545 which was isolated from temperate coastal waters (Fig 2). Surface waters in the region from which RCC299 was isolated have an average temperature of 24.9 + 1.7°C over the last 25 years. Based on analysis of several phylogenetic markers these strains have been determined to belong to phylogenetically distinct Micromonas clades. Micromonas strain RCC299 was isolated in 1998 during a research cruise in the equatorial Pacific. Subsequently, it was rendered clonal and axenic in 2005. The original strain that was prepared for genome sequencing (as above) is available from the Roscoff Culture Collection (where it is designated RCC299). The axenic, clonal culture has now been deposited at the Center for Culture of Marine Phytoplankton (where it is designated CCMP2709). It belongs to Clade M_II (Fig 1) and the genome can be accessed at: www.jgi.doe.gov/MicromonasRCC299. 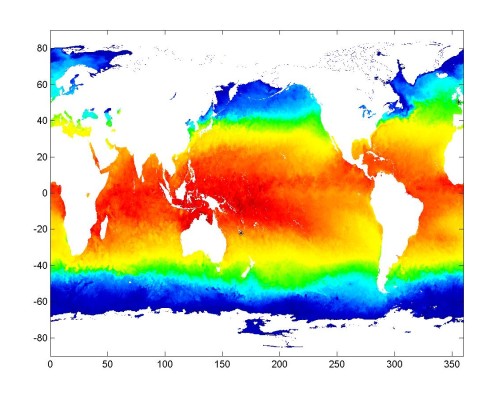 Micromonas strain CCMP1545 was isolated from temperate coastal waters near Plymouth, England (North Atlantic/English Channel waters). Surface waters in this region have an average temperature of 12.7 ± 2.7°C over the last 25 years. Micromonas strain CCMP1545 was isolated in 1950 and rendered axenic in 1992. The axenic CCMP1545 culture is available at the Center for Culture of Marine Phytoplankton. This strain belongs to Clade M_V (Fig 1) and the genome can be accessed at: https://genome.jgi.doe.gov/MicpuN2/MicpuN2.home.html. Note that EST clustering at JGI for both these genomes is flawed, due to over-clustering. Protocols for isolation of DNA and RNA can be found on the protocols page.

Ostreococcus Overview: Ostreococcus is a eukaryotic, photosynthetic picoplankter (< 2 mm in diameter) which seems to be found primarily in temperate waters. Ostreococcus was first reported in 1994 (Courties et al. 1994). It was quickly recognized as the smallest known free-living eukaryote in the planet! Like Micromonas, it has a single chloroplast, single mitochondrion, single Golgi apparatus and nucleus. It does not have scales – and unlike Micromonas it also does not have a flagellum (it is not motile). There are at least two coherent clades based on phylogenetic analysis of the 18S rRNA gene. One of these (O_II, Fig 1) has been described as deep adapted (Rodriguz et al. 2005), based on culture work, but it is often found in surface waters.

Ostreococcus tauri (strain OTH95) was chosen for complete genome sequencing very early on because it was the smallest known free-living eukaryote. OTH95 was isolated from the Thau lagoon in Mediterranean France (ref). Prior to genome sequencing, it was rendered clonal and axenic. The original strain that was prepared for genome sequencing is available from the Roscoff Culture Collection (where it is designated RCC745). It belongs to Clade O_I (Fig 1) and the genome can be accessed in two places http://bioinformatics.psb.ugent.be/genomes/ostreococcus_tauri/ and https://genome.jgi.doe.gov/Ostta4/Ostta4.home.html. Note that the first site, at the University of Ghent is the annotation that corresponds to the original genome publication (Derelle et al. 2006) and the gene catalog has a greater number of predicted genes (probably more complete) than the JGI analysis (the second URL which corresponds to analyses in Palenik et al. 2007).

Ostreococcus lucimarinus (strain CCE9901) was isolated from coastal waters of the Southern California Bight (USA) and first reported in 2004 (Worden et al. 2004). The strain was rendered clonal and axenic in 2001 and has been deposited in at the Center for Culture of Marine Phytoplankton under the designation CCMP2514. This strain belongs to Clade O_1 (Fig 1) and the genome can be accessed at https://genome.jgi.doe.gov/Ost9901_3/Ost9901_3.home.html.