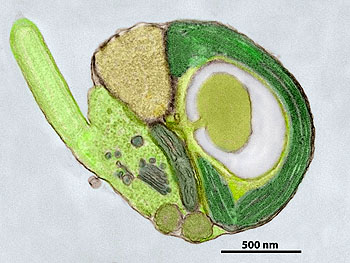 This transmission electron microscope image shows a cross section through a single Micromonas alga. In this “colorized” image, the alga’s chloroplast (photosynthetic organelle) wraps around the right side of the cell and is indicated in dark green. The white area is a starch granule contained within the chloroplast. The tan area at upper left is the cell’s nucleus. The dark green area just below the nucleus is its mitochondrion. Emerging from the left side of the alga is part of it’s flagellum, a hair-like appendage that propels the alga through water. The black bar is 500 nanometers (1/50,000 inch) long.
Image: T. Deerinck, M. Terada, J. Obiyashi, M. Ellisman (all National Center for Microscopy and Imaging Research) and A.Z. Worden (MBARI)

By sequencing the DNA of two tiny marine algae, a team of scientists has opened up a myriad of possibilities for new research in algal physiology, plant biology, and marine ecology. The project was led by Alexandra Worden at the Monterey Bay Aquarium Research Institute (MBARI) and the Joint Genome Institute (JGI). The genome analyses involved a collaborative effort between MBARI, JGI, and an international consortium of scientists from multiple institutions, including University of Washington, Ghent University (Belgium), and Washington University in St. Louis. Initial discoveries from the research appear in the April 10, 2009 edition of Science magazine.

Microbial oceanographer Alexandra Worden led a team of scientists that sequenced the genomes of two Prasinophytes in the genus Micromonas. Each Micromonas cell is only about one fiftieth the width of a human hair. However, they are widespread and may serve as important links in marine food webs. They may also influence the amount of carbon dioxide the oceans take up from the atmosphere.

A microscopic alga with leaves?

Worden and her fellow researchers discovered that Micromonas carries a significant number of genes that are not found in the genomes of other green algae (at least not in the five or six other species sequenced to date). Some of these genes, however, are found in land plants or bacteria. Worden’s team is currently trying to find out the functions of these genes in Micromonas. Such information will help researchers better understand how Micromonas interacts with its environment and with other marine organisms.

According to Worden, “One of our main findings is that some genes that were thought to be land-plant specific were also found in Micromonas. It’s possible that land plants could have developed these genes and Micromonas also developed them. Or perhaps an organism (the ancestral alga) that preceded both land plants and Micromonas had them, which is the simpler explanation.”

For example, the researchers found evidence that Micromonas has genes that scientists previously temporally associated with the development of leafy plants. Obviously, Micromonas never developed leaves. Thus Worden’s research suggests that such genes may have other functions that are not yet understood.

Another unexpected finding was that Micromonas contains genes associated with sexual reproduction (as opposed to simply dividing into two cells asexually). As Worden says, “Formerly it was thought that these algae do not have sex. Now it really looks as though they do have sex. No one has seen it, but this could be because laboratory conditions are not correct for switching to this form of reproduction.”

Simply knowing Micromonas can reproduce sexually could lead to additional discoveries. Worden explains, “Now that we have the sequences for those genes [for sexual reproduction], we could look for them being expressed in the field. Then we could try to figure out the conditions triggering sexual reproduction and the ecological avenues it opens for Micromonas. In addition, if we could get Micromonas to reproduce sexually in the lab, we might be able to develop a system for permanently “knocking out” genes [deactivating or removing them from an organism’s DNA] and advance our knowledge of their functional roles. We don’t have such a system yet for any of the more widespread marine algae.”

Filling in the unknowns 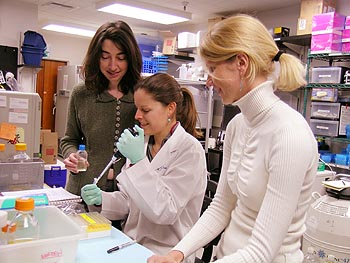 In addition to highlighting a number of genes whose functions are known from other organisms, Worden’s team found that a large number of the genes in Micromonas have no known function. She explains, “We know they’re real—they’re expressed and we’ve seen them in other organisms—but they’re not genes that anyone has characterized, so no one knows what they do.”

Worden continues, “As an ecologist starting out on this project, I was trying to find out what genes were ‘special’ to each genome, or those shared by the two Micromonas strains but not other competitors. By looking at the function of such genes we could then learn more about the different niches of these organisms… It turns out that we don’t yet know the function of many of these genes—but we know we need to target them. This highlights the grand challenge ahead. With a focused effort on cell biology, we will be able to discover the function of such genes. This will advance our understanding of these organisms and their ecology as well as metagenomic analyses. It’s really basic cell biology, but the implications for doing ecological work are huge.”

Figuring out what these genes “do” could also help researchers in other fields, such as plant science. As Worden put it, “A lot of important agricultural plants are already sequenced. But there’s a big difference between having the sequence and making meaning of the sequence. For example, there is a huge list of genes that contain ‘domains of unknown function.’ We’ve seen these domains in many organisms and we know they must be real, but we don’t know their cellular function. If we can fill in such blanks, using these ‘simpler’ organisms, we’d be doing everyone a favor.”

Finally, the research will help researchers understand how algae respond to changes in their environment. This should give scientists a better idea of how marine algae take up carbon dioxide from the atmosphere, a central feature of the roles they play in mitigating greenhouse warming of the Earth. As Worden points out, “There is a lot of work that needs to be done integrating our discoveries with research being done on other marine microbes in order to understand more about community interaction, synergies, and how together they shape ecosystem responses. With this in mind we can develop a more mechanistic understanding of how carbon is moving within the marine environment and develop more sensitive tools for investigating carbon flow.”

Sequencing the genomes of two small marine algae may not seem to have many real-life benefits. But when you consider that these organisms share genes with other microbes and suites of genes with land plants, the possibilities are virtually endless. Worden and her team are looking forward to further exploration of the “toolbox” of genes used by the multitude of organisms that keep our planet green.