From a salt marsh to the deep sea—testing networked sensors 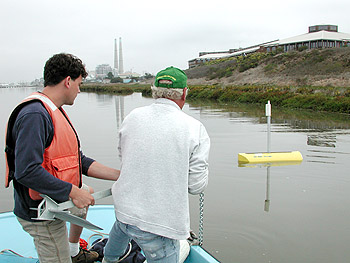 On September 17, 2004, MBARI scientists deployed the second in a series of scientific moorings, not in the deep sea, but in the shallow, often muddy waters of the Salinas River. This mooring is part of the “Land/Ocean Biogeochemical Observatory” (LOBO), a multi-year effort that uses a network of sensors to measure the transport of nutrients within Elkhorn Slough continuously and in nearly “real time.”

The LOBO moorings will collect data on water currents, temperature, salinity, and concentrations of key nutrients, such as nitrate, ammonium, and phosphate. By simultaneously measuring nutrients in different parts of the slough, the researchers hope to better understand where these nutrients come from, where they go, and how they relate to biological, geological, and chemical changes in the slough.

Previous studies detected such nutrient pulses in the slough, but were unable to determine where they came from. Using their sensor network, the MBARI researchers hope to prove that these nutrients come primarily from the Salinas River. The researchers plan to add more moorings during the coming year to study how these nutrients are diluted or consumed as they move farther up the slough.

This example illustrates how a network of biogeochemical sensors can be much more useful than a single point measurement or several non-networked devices. The LOBO project is intended to show how such a network can collect field data from different sensors simultaneously and automatically for months or even years, in all kinds of conditions, with minimal maintenance. Such long-term data will be used by scientists from many institutions to study issues such as water quality, habitat, biodiversity, and invasive species in Elkhorn Slough.

The LOBO project is headed by MBARI scientist Ken Johnson and funded in part by a National Science Foundation BioComplexity Grant. The benefits of this research are not limited to Elkhorn Slough. Similar monitoring systems might eventually be used in other estuaries across the United States. In addition, networked sensors will play a key part in MBARI’s ocean observatory efforts in the deep waters of Monterey Bay.