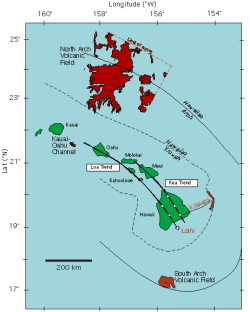 Map showing the North and South Arch lava fields, in red, in relation to the Hawaiian Islands. The axes of the trough and arch are encircling the islands. Map © MBARI 2001

Photo from the Shinkai 6500 submarine of a sheet flow on the North Arch. Note the thin sediment cover, indicating the relatively young age of the flow. Photo © 1999 JAMSTEC

The enormous weight of the Hawaiian volcanoes on the ocean crust bends the lithosphere down, much like a piece of plywood on sawhorses would bend if you were to stand on it. Around the islands is a moat, the ~5500m deep Hawaiian Trough. Beyond the down-warped area is an arch, levered up 200m or so above the average depth of the ocean crust, just like the edges of the plywood would be lifted above the height of the sawhorses. The flexing has tilted once flat-lying coral reef terraces around the islands.

Vast flows of flood basalts have been found along the North Arch, the axis of which is about 250 km north of Oahu, and also on the South Arch, south of the island of Hawaii. These flood basalts are intriguing because the locations are far from the center of the hot-spot plume, and the eruptions produced enormous volumes of very fluid lavas. On the North Arch, the nearly flat-lying sheet-like flows extend about 100 km both north and south from the axis of the flexural arch. Many of the vent lavas are highly vesicular, apparently because of degassing of CO2. The lavas are geochemically similar to the rejuvenated-stage lavas of the Koloa (Kauai) and Honolulu (Oahu) Volcanics, and were generated by partial melting of sources similar to those of the Koloa Volcanics. Prior to eruption, these magmas may have accumulated at or near the base of the lithosphere in a structural trap created by upbowing of the lithosphere.

Our research on Hawaiian flexural arch

OAHU AND MAUI-NUI COMPLEX – There is considerable uncertainty concerning the history of lithospheric flexure of Oahu and the Maui-Nui Complex associated with the Hawaiian hot spot. Previous reconstructions based on models and sparse observational data place the zone of maximum uplift (forebulge) either under Oahu or between Oahu and Molokai. To address this issue we have compiled and analyzed all existing and new high-resolution multibeam bathymetry, dive observations, and chronologic data from submerged terraces in the region. We have identified 89 separate submarine terraces and mapped their distribution across the volcanic flanks of Oahu and the Maui-Nui Complex. These data are used to systematically measure the direction and amplitude of terrace tilting within the Maui-Nui Complex and to provide new constraints on lithospheric flexure associated with volcanic loading at the hot spot. The terraces are divided into six separate geographic regions (Oahu, Molokai, Penguin Bank, Lanai, Maui, and East Maui) defined by significant discontinuities in either terrace morphology or depth. Following the sequential development of new substrate as the new volcanoes formed throughout the development of the MNC, 18 new and 51 published 87Sr/86Sr isotopic ages show that the terraces in these regions were also initiated at different times, and the tilting data show that they also responded to lithospheric flexure independently. The general pattern of terrace tilting records the plate’s response to lithospheric flexure with each region continually tilting toward the zone of maximum subsidence since their formation. Our individual tilt calculations are based on the most complete and highest-resolution bathymetric data available, and they show that plate response to volcanic loading is a gradual process. Finally, we demonstrate that the shallowest terraces we identified in the Oahu and Molokai regions tilt toward the north, away from the current zone of maximum subsidence, indicating that these regions have recently passed the zone of maximum uplift. We compare our results with two separate published numerical models and differentiate between these, resolving a long-standing uncertainty in the position of the forebulge.

NORTH ARCH – Submarine explosive eruptions are generally considered to become less likely with increasing depth due to the increasing hydrostatic pressure of the overlying water column. Volcaniclastic deposits from the North Arch volcanic field, north of Oahu, have textural characteristics of explosive fragmentation yet were erupted in water depths greater than 4,200 m.

The most abundant volcaniclastic samples from North Arch are clast-supported with highly vesicular, angular pyroclasts. They are most likely near-vent pyroclastic fall deposits formed in eruption columns of limited height. Interbedded with highly vesicular pillow lava, they form low (50 to 200 m), steep-sided cones around the vents. Less common are stratified samples with graded bedding; one such sample includes a layer of roughly aligned, platy, bubble-wall glass fragments (resembling littoral limu o Pele) that may have been deposited by density currents. In addition to bubble-wall glass shards, numerous glass fragments with spherical, delicate spindle and ribbon shapes, and Pele’s hair-like glass strands occur in the finer size fraction (<0.5 mm) of some samples. They are probably more distal fallout. Another sample, consisting of glass fragments dispersed in a marine clay matrix, was apparently reworked and deposited farther from the vents by bottom currents. Glass compositions include low-(~0.4-0.6 wt%) and medium-K2O (>0.6 wt%) alkalic basalt, basanite, and nephelinite. Sulfur and chlorine abundances are high, reaching a maximum of 1,800 and 1,300 ppm, respectively. The ubiquitous presence of limu o Pele fragments, regardless of glass composition, suggests that bursts of Strombolian-like activity accompanied most eruptions. Coalescing vesicles observed in larger pyroclasts and some pillow lava suggests accumulation of volatiles. Since the great hydrostatic pressure makes steam expansion impossible, a volatile-rich, supercritical magmatic fluid probably drove the eruptions. If these volatile-rich magmas had erupted in shallow water or subaerially, tall fountains would most likely have resulted. The great hydrostatic pressure (>40 MPa) limited fountain and eruption column heights.

NORTH ARCH AND OAHU – Hawaiian volcanoes, dominantly shields of tholeiitic basalt, form as the Pacific Plate migrates over a hot spot in the mantle. As these shields migrate away from the hot spot, highly alkalic lavas, forming the rejuvenated stage of volcanism, may erupt from vents scattered on the tholeiitic shields after an interval of erosion lasting for 0.25-2.5 million years. These lavas occur on the shields of Haleakala (Maui), Ko’olau (Oahu), Kauai and Ni’ihau. Alkalic lavas with geochemical characteristics similar to rejuvenated-stage lavas erupted on the sea floor north of Oahu along the Hawaiian Arch, forming the North Arch Volcanic Field.

The variable Tb/Yb, Sr/Ce, K/Ce, Rb/La, Ba/La, Ti/Eu and Zr/Sm ratios in lavas forming the North Arch and the rejuvenated-stage Honolulu Volcanics were controlled during partial melting by residual garnet, clinopyroxene, Fe-Ti oxides and phlogopite. However, the distinctively high Ba/Th and Sr/Nd ratios of lava forming the North Arch and Honolulu Volcanics reflect source characteristics. These characteristics are also associated with shield tholeiitic basalt; hence they arise from the Hawaiian hot spot, which is interpreted to be a mantle plume. Inversion of the batch melting equation using abundances of highly incompatible elements, such as Th and La, requires enriched sources with 10-55% clinopyroxene and 5-25% garnet for North Arch lavas. The 87Sr/86Sr and 143Nd/144Nd ratios in lavas forming the North Arch and Honolulu Volcanics are consistent with mixing between the Hawaiian plume and a depleted component related to mid-ocean ridge basalts. Specifically, the enrichment of incompatible elements coupled with low 87Sr/86Sr and high 143Nd/144Nd relative to bulk Earth ratios is best explained by derivation from depleted lithosphere recently metasomatized (new minerals replaced old ones by nearly simultaneous dissolution and deposition) by enriched incipient melt (<2% melting) from the Hawaiian plume. In contrast, the isotopic ratio of Os, an element that is compatible during mantle melting, has a large range in the published data (0.134-0.176), which reflects heterogeneity caused by various proportions of pyroxenite veins residing in a depleted peridotite matrix. Reference: H.-J. Yang, F.A. Frey, and D.A. Clague (2003) Constraints on the source components of lavas forming the Hawaiian North Arch and Honolulu Volcanics, Journal of Petrology, 44(4): 603-627. [Article]

NORTH ARCH – The North Arch Volcanic Field surrounds numerous Cretaceous volcanic ridges, circular flat-topped volcanoes, and low-relief regions of the sediment-covered seafloor. New SeaBeam bathymetric maps that cover about 1/3 of the flow field reveal nearly 100 volcanic structures ranging from low shields to steep cones. One shield is modified by a pit crater approximately 1.1×1.25 km and 300 m deep. A lava flow in the SE part of the volcanic field covers about 3,600 km2, has an estimated volume of 36-72 km3, and apparently erupted from a 75 km long NNW-trending fissure system. A 108 km long flow advanced north in a graben parallel to the Cretaceous mid-ocean ridge that formed the crust; its surface gradient is 1.9 m/km (or 1º slope).

Shinkai 6500 submersible dive 502 explored one of the composite volcanoes and found dense alkalic basalt sheet flows erupted after vesicular basanite pillow basalts and fragmental hyaloclastite that make up the steep-sided cone. Dive 503 collected alkalic basalt sheet flows and pillow basalt from the top 122 m of the southern wall of a pit crater that formed by collapse caused by a decrease in magma volume from a shallow storage chamber located 1-2 km below the surface. The volume change may have been caused by loss of gas bubbles from the stored magma when replenishment ceased at the end of the eruption. The surficial drapery-folded sheet flow is covered by only a few cm of sediment, indicating that it is younger than the 0.5-1.5 Ma ages previously estimated for North Arch flows and vents.

Vigorous eruption of highly vesicular lava constructed steep-sided cones of pillow basalt and hyaloclastite whereas steady eruption of dense lava that had lost its bubbles prior to eruption formed low relief lava shields. Vesiculation, even fragmentation, of these alkalic magmas at water depths as great as 4300 m is caused by exsolution of much of their high initial volatile content, mainly CO2 with less H2O. One hyaloclastite sample contains thin glass bubble-wall fragments similar to those formed by mild explosions as seawater boils following mixing of magma and seawater. Low-viscosity dense lava is emplaced as sheet and channelized tube-fed flows that travel down gradients as small as 1.5 m/km (0.08º) and flow as far as 108 km from their vents.

Volcanism at the edge of the plume

Olivine accumulation and fractionation were the major post-melting processes that affected the composition of the lavas. After correction for these processes, the inferred primary magma compositions show that they were derived by variable, relatively low-extents of melting of garnet peridotite. Garnet and olivine were important residual phases during partial melting and there is little evidence for residual hydrous phases, sulfides or Fe-Ti oxides. The mantle source for the North Arch lavas had Sr, Nd, and Pb isotopic ratios intermediate between those of Pacific Ocean lithosphere and the inferred range for Hawaiian plume components. These data are consistent with a the source magmas being a mixture of lithosphere and hot-spot plume. Although the plume-derived component was probably from the Hawaiian plume, an alternative hypothesis is that during the middle Cretaceous, the South Pacific lithosphere upon which the islands later erupted was contaminated by plumes that formed large oceanic plateaus (e.g., Ontong Java), and that this mixed source was subsequently partially melted as it passed near the Hawaiian plume.