Fish-tracking robots take to the seas and skies off Portugal 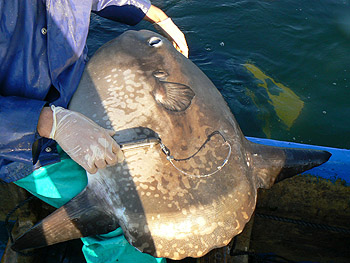 A Mola mola (ocean sunfish) with a GPS tag attached. Over a dozen of these fish are being tracked during the REP-13 experiment. Image: Marina Oliveira.

A unique field experiment being conducted off the coast of Portugal this week combines ocean robotics and marine biology in a complex aquatic dance. Researchers are using a fleet of robotic vehicles to track over a dozen Mola mola (ocean sunfish) as they forage across the coastal ocean. During this experiment, engineers and marine biologists are working together to test new techniques for tracking multiple animals in real time, collecting environmental data in the water around each animal, and controlling and coordinating a diverse group of robotic vehicles. Collaborators are also testing advanced capabilities for seafloor mapping and for search and rescue, in concert with local maritime authorities.

The entire experiment, known as “Rapid Environment Picture 2013” (REP-13) runs for 10 days, from July 8th through July 18th, 2013, off the coast of Sesimbra, just south of Lisbon, Portugal. It is being led by engineering professor João Sousa of the University of Porto and artificial intelligence researcher Kanna Rajan of the Monterey Bay Aquarium Research Institute (MBARI), working with the Portuguese Navy and other collaborators, including the Portuguese Hydrographic Institute in Lisbon. 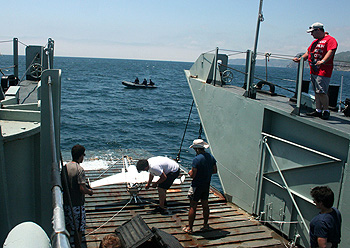 Engineers from the University of Porto prepare to launch an unmanned aerial vehicle (UAV) from the ramp of a landing craft supplied by the Portuguese Navy for the REP-13 experiment. Image: Marina Oliveira.

At the center of the experiment are the Mola molas—young, wild-caught fish that have been outfitted with GPS tags. These fish have been released and are being tracked throughout the experiment. As the Molas search for and congregate around patches of food (jellies), the researchers are using robots to help track the animals and to learn what environmental conditions are optimum for the fish and their gelatinous prey.

The robotic vehicles used in this experiment include unmanned aerial vehicles (UAVs), autonomous underwater vehicles (AUVs), and a Wave Glider from Liquid Robotics of Sunnyvale, California, which glides over the ocean surface. These robots are being launched and controlled from a Portuguese Navy landing craft that serves as a floating command center for the experiment. MBARI is providing software to command and control some of the robots, to track all of the robots and fishes in real time, and to help the researchers make decisions on a day-to-day basis during the experiment.

UAVs are robotic airplanes. The UAVs in this experiment have a wingspan of about two meters. Launched from the boat, they are being used to locate selected Mola molas and to help researchers identify and track the fish from the air. Each UAV return to the boat after 45 minutes, where it is recovered using a net; another UAV is then dispatched to continue the survey. 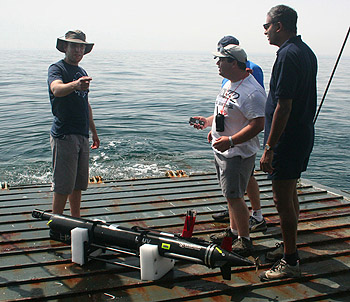 Researchers, including Kanna Rajan (right), prepare to launch a autonomous underwater vehicle (AUV) from the ramp of a landing craft supplied by the Portuguese Navy. Image: Marina Oliveira.

The AUVs, robotic submersibles about two meters long, are also released from the floating command center. They travel underwater to and around the selected Mola molas, recording information about the temperature and chemistry of the seawater in the vicinity of the fish. This provides biologists with information about the environment in which the fish are moving and feeding.

Sousa and Rajan are long-time collaborators in marine robotics. Rajan said, “My hope is that experiments such as this one will push the state of the art and practice in autonomy and automated robotic control”.

Robotic tracking techniques such as those being tested in this experiment could have a number of practical applications. For example, they could help authorities track marine mammals and protect them from ship strikes. Such technology could be especially useful in polar regions, where marine mammals are abundant, and ship traffic is increasing rapidly.

For additional information or images relating to the REP-13 experiment, please contact:
Marina Oliveira at the University of Porto
marina.s.felix@gmail.com