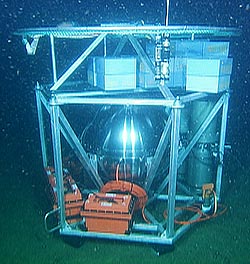 In late April 2009, a team of MBARI researchers tested the world’s only deep-sea robotic DNA lab beneath the waters of Monterey Bay. This instrument is the latest version of the Environmental Sample Processor (ESP), which MBARI molecular biologist Chris Scholin has been developing for over 10 years. The ESP is a self-contained robotic laboratory that collects samples of seawater and tests these samples for different types of genetic material, such as DNA.

Over the last several years, Scholin and his team have used the ESP to study microscopic marine life near the sea surface in Monterey Bay. However, adapting the ESP to work in deep water added new challenges to what was already a very complicated project. Because of the immense pressure in the deep sea, the researchers had to build a special pressure housing to protect the delicate instrument. They also had to design and build an automated system to “depressurize” seawater before it could be introduced into the ESP.

Scholin’s team spent the last two years designing and building these systems and integrating them with the ESP. On April 23, they tested the completed system in the open ocean for the first time. On May 1, they ran the first water sample through the system, looking for genetic material from marine bacteria. Both tests were successful.

Later this spring, the deep-ESP team will test the instrument for several days in water about 2,900 meters deep, offshore of Monterey Bay. In August, 2009, the deep ESP will be deployed for its first scientific mission—to study microorganisms near hydrothermal vents off the coast of Oregon. Later in 2009 it will be hooked up to the MARS undersea observatory, which will allow the team to run experiments and gather data from shore.

The deep-ESP project was funded by grants from the National Science Foundation, the Keck Foundation, NASA, the Gordon and Betty Moore Foundation, and the David and Lucile Packard Foundation.

The photos below show some of the activities that went into preparing for and carrying out the first ocean tests of this amazing new instrument. 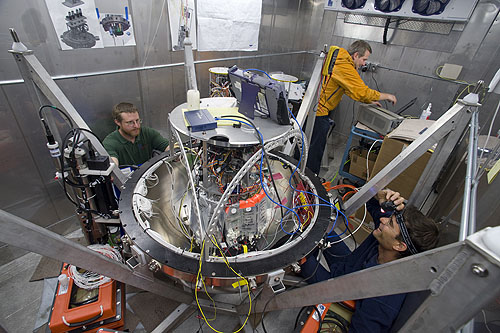 Engineers Doug Pargett, Wayne Radochonski, and Scott Jensen (left to right) performed tests on the ESP (in the center of the photo) before sealing it inside its pressure housing. The researchers tested the ESP inside of a refrigerated van to make sure that it would work in temperatures similar to those found in the deep sea (within a few degrees of freezing). Image: Todd Walsh © 2009 MBARI 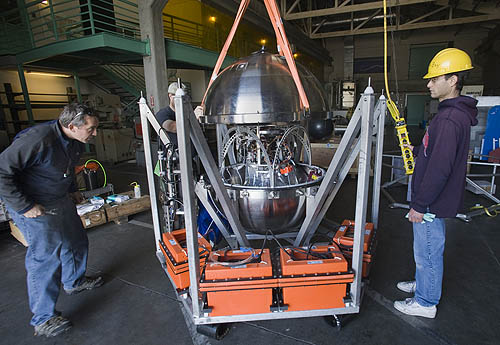 The deep ESP is designed to operate as deep as 4,000 meters (almost 2.5 miles), where the pressure is about 400 times as high as at the sea surface. The delicate instrument is protected from this crushing pressure by a spherical pressure housing made out of titanium. Before assembling the housing, Jim Birch and Scott Jensen made sure that the top and bottom halves of the housing were precisely aligned. Image: Todd Walsh © 2009 MBARI 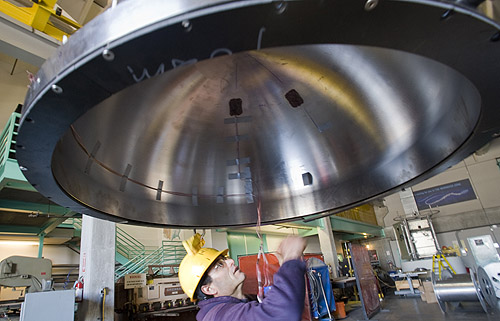 Scott Jensen inspected the upper half of the ESP’s titanium pressure housing before it was assembled. The surfaces where the two half-spheres meet must be perfectly clean and smooth to prevent leaks. Image: Todd Walsh © 2009 MBARI 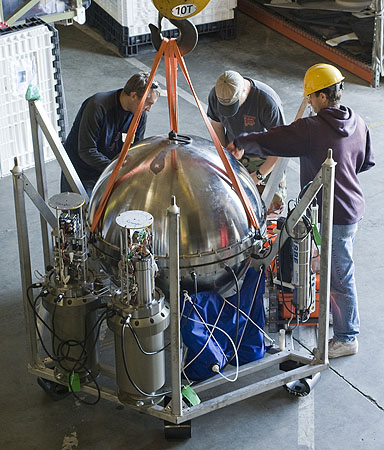 After aligning the top and bottom of the pressure housing, MBARI engineers completed the seal by tightening a series of bolts around the rim of the sphere. The two cylindrical instruments on the lower left side of the photograph are the “deep-water sampling module” (DWSM), which decompresses samples of seawater before they are introduced into the ESP. Image: Todd Walsh © 2009 MBARI 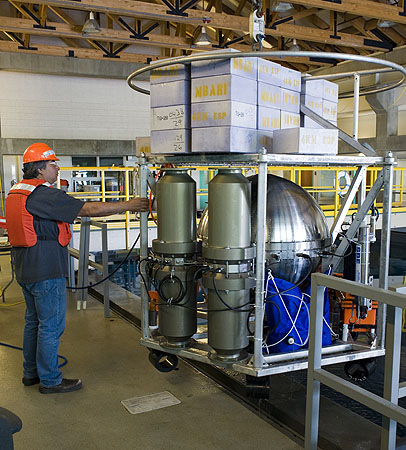 Senior Research Technician Roman Marin III helped lower the ESP and DWSM into the MBARI test tank, where the system was checked for leaks and its buoyancy adjusted. The entire system weighs several thousand pounds in air, but only about 100 pounds underwater, because of buoyancy provided by air in the pressure housing (as well as the white, rectangular blocks of foam bolted to the top of the frame). Because the system is so light in seawater, MBARI’s remotely operated vehicles can pick up and move the ESP from one spot to another with ease. The extra buoyancy also allows the deep ESP to float back up to the sea surface after a heavy “drop weight” is released from the base of the frame. Image: Todd Walsh © 2009 MBARI 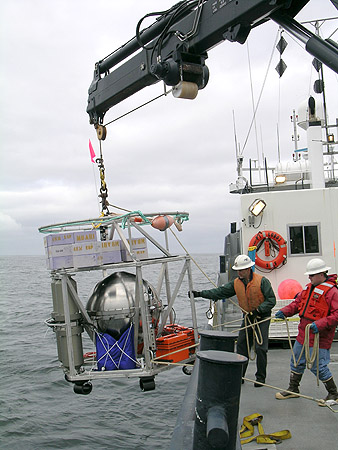 On the day of the first engineering deployment in Monterey Bay, the crew of the research vessel Point Lobos carefully lowered the deep-ESP over the side of the ship. Image: Kim Fulton-Bennett © 2009 MBARI 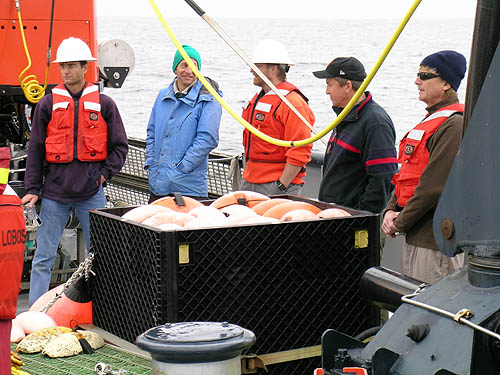 Members of the ESP team watched anxiously as the deep ESP was lowered over the side of the R/V Point Lobos for the first time. From left to right, the team members on the cruise included Scott Jensen, Brent Roman, Doug Pargett, Jim Birch, and Chris Scholin. Image: Kim Fulton-Bennett © 2009 MBARI 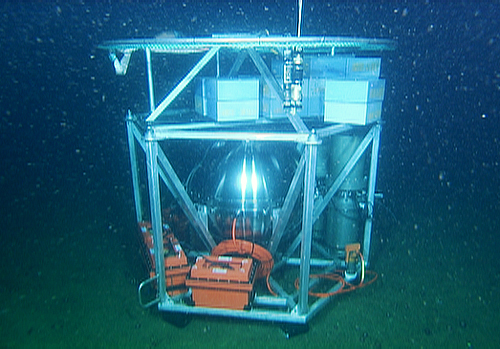 During the test deployment, the deep ESP was allowed to sink about 640 meters (2,100 feet) down to the seafloor. Then the researchers used the remotely operated vehicle Ventana to dive down and inspect the instrument. They were happy to discover that it had landed “right-side up.” Image: © 2009 MBARI 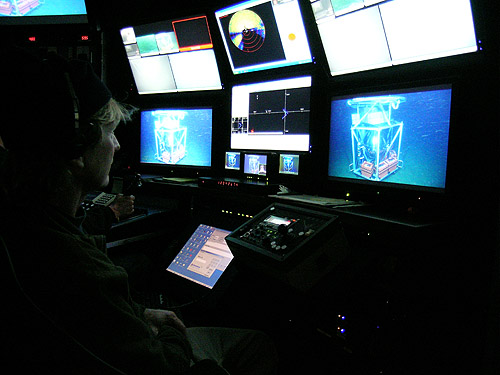 After the deep ESP was deployed, the researchers plugged it into the ROV Ventana, which allowed them to control the system and run experiments from the ship. Project lead Chris Scholin watched and directed the operation from the ROV control room on the research vessel Point Lobos. Needless to say, he and all the other researchers were very excited to see successful results from their first engineering tests. After the researchers finished their tests, they used to ROV to release a “drop weight” from the base of the frame, which allowed the system to float back up to the surface. At the surface, the ESP was hoisted back onto the R/V Point Lobos and returned to shore, where the team prepared it for its next deployment. Image: Kim Fulton-Bennett © 2009 MBARI