Explosive eruptions occur even in the deep sea 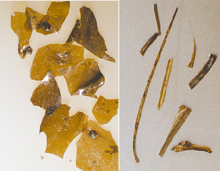 When intruding magma and ground water come into contact, volcanoes can explode violently in “plinian” style eruptions, such as Kilauea’s eruption in 1790. This eruption changed the course of Hawaiian history by giving Kamehameha (the future King) the appearance of having the goddess Pele’s favor when the opposing warriors were killed by heavy ash-fall as they returned home, having been otherwise victorious in battle against Kamehameha.

Interactions with seawater also can have explosive results. When hot lava comes in contact with seawater, it cools so rapidly that it shatters into glass sand and rubble. The black sand beaches of Hawaii were created by such interaction between hot lava and seawater. We have found that much of the material on the submarine flanks of the volcanoes is volcaniclastic (cemented shattered lava fragments) rather than solid lava flows, which contributes to the instability of the flanks and large landslides around the islands.

Where lava enters the sea within lava tubes, rapid expansion of seawater to steam under confining pressure in the tube can produce large glass bubbles that shatter into curved, paper-thin, bubble-wall fragments known as “limu o Pele” (which means Pele’s seaweed).

Such bubble-wall fragments and thin strands of volcanic glass, known as Pele’s hair, have now been recovered from Loihi Seamount and other deep-sea locations around Hawaii. The high sulfur and carbon dioxide contents of these basalt glass shards show that they were erupted at great depth. These fragments indicate that submarine eruptions can be more violent than previously thought, and can produce features similar to those observed near shore to a depth of at least 4000 m, despite the fact that steam (water vapor) shouldn’t be able to expand or even form under the tremendous pressures at those depths.

Our research on explosive eruptions by hot spot volcanoes

LOIHI – AMS radiocarbon age dating of planktonic foraminifera in volcaniclastic deposits on Loihi Seamount yields ages ranging from 590 years before present (y BP) at 10 cm depth to 5,880 y BP at 1,007 cm depth in an 11-m-thick section exposed along inward facing, caldera-bounding faults on the eastern side of Loihi’s summit. The accumulation rate of the deposit was about 0.37 cm/y from 5,880 to 3,300 y BP and it consisted of subequal amounts of alkalic and tholeiitic fragments. The rate slowed dramatically at about 3,300 y BP to an average 0.04 cm/y and the particles that have accumulated since consist mostly of alkalic glass fragments. The decrease in accumulation rate could indicate a decrease in volcanic activity at Loihi beginning about 3,300 y BP. This lower level of activity appears to be continuing today.

LOIHI – Explosive submarine basaltic eruptions, occurring in water depths of several kilometres, commonly result in the formation of layered volcaniclastic deposits. In order to quantify the cooling of such volcaniclastics, we have identified and separated two types of glassy fragments from these deposits on Loihi seamount: 1) fine (30–80 μm) limu o Pele bubble wall fragments and 2) coarser (0.8–1.2 mm) dense angular fragments. These pristine basaltic glasses have been subjected to differential scanning calorimetry (DSC) from room temperature up to temperatures above their glass transition. Heat capacity (cp, in J g− 1 K− 1) data reveal glassy and liquid regimes separated by clear hysteresis (structural relaxation) behaviour within the glass transition. The transient cp in the glass transition interval exhibits a deep trough before the peak, indicating very high cooling rates. It is a classic feature of so-called “hyper-quenching”, having been observed in DSC experiments on glasses produced using the splat-quench [D.B. Dingwell, P. Courtial, D. Giordano and A.R.L. Nichols, Viscosity of peridotite liquid, Earth and Planetary Science Letters 226(1–2), 127–138, 2004.], and cascade fibre-spinning [Y.Z. Yue, J.D. Christiansen and S.L. Jensen, Determination of the fictive temperature for a hyperquenched glass, Chemical Physics Letters 357(1–2), 20–24, 2002.] techniques. The trough is deepest for the limu o Pele fragments. Energy matching methods, developed for the estimation of cooling rates for such glasses, yield a rate of 105.31 K s− 1 for the cooling of the fine sieve fraction of limu glass on the sea floor at Loihi.

Thus, limu o Pele volcaniclastics, believed to be formed during mild submarine pyroclastic eruptions, have experienced the fastest cooling of any natural volcanic glass measured to date. Such extreme cooling rates are likely to impact on many chemical and physical aspects of the stability of these glasses on the sea floor, as well as their use as proxies for field variables of the Earth’s physical state and as monitors of the efficiency of chemical lithosphere–hydrosphere exchange.

Pyroclastic and hydroclastic deposits on Loihi

LOIHI – Layered volcaniclastic deposits up to 11 meters thick crop out along faults at the caldera’s edge at the summit of Loihi Seamount. The layers include unconsolidated volcanic sands and gravels and volcanic silt-to-mudstone. Fragments in volcaniclastic units include fluidal clasts, bubble-wall fragments (limu o Pele), highly vesicular to scoriaceous fragments, and Pele’s hair formed during pyroclastic eruptions. Fragments also include lithic fragments coated in lava, coarse-grained basalt fragments, hydrothermally altered basalt and glass fragments, and hydrothermal stockwork fragments of pyrite and barite formed during hydromagmatic (phreatic and phreatomagmatic) eruptions. Pyroclasts of tholeiitic and transitional compositions tend to be dense and probably formed during strombolian (mildly explosive) activity whereas those of alkalic compositions are highly vesicular to scoriaceous and could have formed during strombolian or hawaiian (gently effusive) eruptions.

Scoria fragments from subaerial eruptions of Kilauea, intercalated with locally derived volcaniclastic deposits, are most likely from the ca. 1790 A.D. Keanakakoi eruption, and suggest that the volcaniclastic units on Loihi are younger than a few thousand years. Exposed sections decrease in thickness to the north on the summit, suggesting sources located mainly in the southern part of the summit platform. Based on analogy with Kilauea, we infer that hydrovolcanic eruptions are linked to pit crater formation, as occurred in 1996, and to earlier caldera formation. The bottom of the deepest pit crater is at 1356 meters depth, so explosive hydrovolcanic activity can occur at least this deep. Loihi Seamount is an unparalleled natural laboratory to study the eruptive style of submarine basaltic explosive eruptions, deposition of the ejecta, and its redistribution and winnowing by currents.

LOIHI, KILAUEA – Bubble-wall fragments, similar to littoral “limu o Pele” (translates to “seaweed of Pele”), were found in volcanic sands erupted on Lo’ihi Seamount and the submarine East Rift Zone of Kilauea Volcano. These were formed by mild steam explosions and are slightly curved, paper-thin, delicate glassy fragments. In comparison, angular glass sands were found at similar and greater depths that formed by cooling-contraction granulation. The limu o Pele were dominantly tholeiitic basalt containing 6.25 to 7.25% MgO, and none contained less than 5.57% MgO, suggesting that higher viscosity magmas do not form lava bubbles. They are undegassed with respect to H2O and S, and the dissolved CO2 and H2O concentrations of several of the fragments indicate eruption at 1200 +300m depth, at pressures exceeding that generally thought to limit steam explosions. We conclude that hydrovolcanic eruptions are possible at these depths.