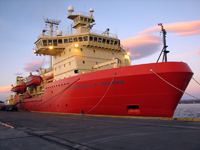 The Research Vessel Ice Breaker (RVIB) Nathaniel B. Palmer is a specialized ship for science operations that is more than 308 feet long and capable of breaking three feet of ice at three knots. The ship houses up to 68 people onboard, including the crew, science teams, and research staff. More information about the RVIBNathaniel B. Palmer can be found at the USAP website. 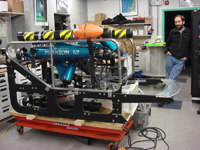 The IceCUBE (Ice Cold Unit for Biological Exploration) is a modified Phantom S2 remotely operated vehicle (ROV) specifically outfitted for the research goals of the scientists. It is tethered to the ship by a cable, and relays physical parameters of the water (conductivity, temperature, depth, turbidity), video footage, and other instrument data in real-time, and can continuously pump water back to the ship. In addition, the ROV will collect plankton near the iceberg using a suction sampler, plankton nets, and an ice scraper. 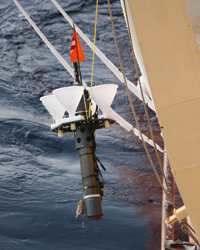 Sediment traps are used to collect sinking organic matter as it descends toward the seafloor. From the organic matter, the science team will be able to measure how much carbon is being exported from the iceberg, what makes up the sinking matter, and what trace elements are found in it. Most sediment traps are moored in one location to collect sinking matter. Lagrangian sediment traps drift with the currents, following similar paths as the drifting icebergs.

The unmanned aerial vehicles (UAVs) are remote-controlled airplanes used to deploy GPS drop tags onto the iceberg to track movement over time. Strong winds and cold temperatures make flying these airplanes very difficult—the pilots trained for many months prior to the cruise. The planes must take off from the helicopter pad on top of the ship and then return and land safely back on the helicopter pad. 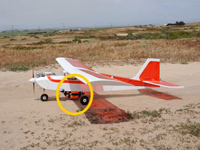 To track iceberg movement over time, GPS tags are dropped onto the surface of the icebergs. These drop tags consist of a GPS unit, a modified Nerf football for a cushioned housing, stabilizers that keep it from sliding off the iceberg, batteries, and an antenna for transmitting their locations back to the ship. These tags are dropped by the UAVs (unmanned aerial vehicles). 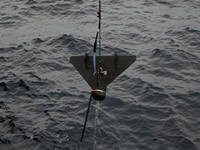 The Tow Fish is an instrument that is deployed from a boom while the ship moves slowly ahead. The tow fish pumps large volumes of water up to the ship for trace element and isotope analysis, and can be towed in shallow or deep (to 300 m) water. Iron and its tracers change forms quickly in seawater, which necessitates near-instantaneous sampling of fresh seawater, before the iron transitions to one of its other states. 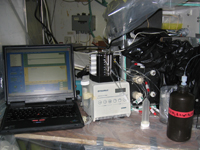 This instrument measures concentrations of iron (Fe II), a trace metal that originates from land and is often limited in the ocean. Icebergs, which originate from land, transport iron far out into the ocean before they melt. The FeLume, or Flow Injection Chemiluminescence, system can measure low concentrations of iron (II) in seawater near and far away from the icebergs. 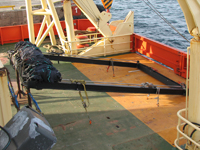 A MOCNESS trawl is an advanced trawling net that allows researchers to collect plankton samples at various depths and water conditions. MOCNESS stands for “Multiple Opening and Closing Net, with an Environmental Sensing System.” Unlike a simple Tucker trawl, which uses one net, the MOCNESS has multiple nets that are remotely opened and closed by the scientists. This is useful for collecting samples at different depths. In addition, the “Environmental Sensing System” monitors the water conditions around the trawl real-time, so scientists can sample specific regions such as those of lower temperature or salinity. 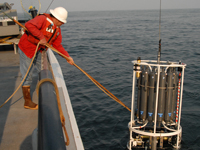 A CTD is a series of sensors that continuously measure conductivity (salinity), temperature, and depth. It is normally housed in a large rosette of Niskin bottles that are lowered over the side of a ship on a wire cable. Niskin bottles are open at the beginning of a CTD deployment, but during ascent they are remotely triggered to close at different intervals, collecting water samples at discrete depths.