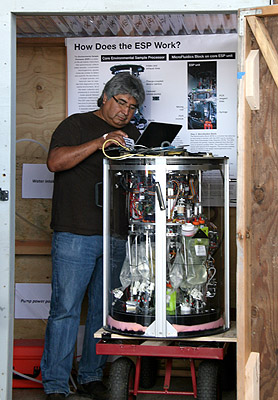 Washington state is one of the nation’s most prolific areas for shellfish harvesting and aquaculture. Yet, as in many other areas, Washington’s shellfish may cause seafood poisoning when certain types of harmful algae or bacteria become abundant in local waters. From June to September 2013, MBARI researchers are collaborating with government agencies, shellfish growers, and native tribes in the Puget Sound area to test a new method for detecting such “blooms” using MBARI-developed Environmental Sample Processors (ESPs).

Each ESP is a self-contained “microbiology lab in a can.” Floating on a mooring or attached to a dock, it can automatically collect water samples and detect microorganisms in the water, based on their genetic material. Even better, it can radio the results of these tests back to researchers, growers, or the public within an hour. This is a great improvement over current monitoring methods, which require a day or two for water samples to be collected, transported, and processed in a laboratory on shore.

In the current experiment, the ESP is being used to detect microscopic algae such as the red-tide dinoflagellate Alexandrium catenella and the diatom Pseudo-nitzschia australis. Both algae produce toxins that can accumulate in shellfish, making them dangerous to eat. The ESP can also detect the alga Heterosigma akashiwo, which can kill pen-raised fish, as well as bacteria such as Vibrio parahaemolyticus, which can pose a threat to humans if the bacteria accumulate in shellfish that are undercooked or eaten raw.

Because the ESP can detect even small numbers of microorganisms, it can serve as an early warning system for shellfish growers and public health agencies. In this case, two different ESPs are being tested—one near a Native American shellfish bed at Lummi Bay and another at a commercial shellfish aquaculture facility at Samish Bay.

Scientists at NOAA and MBARI have already used the ESP to study blooms of toxic algae in California, the Gulf of Maine, and Puget Sound. This initial work has helped researchers determine where and how many ESPs are needed for monitoring in different marine environments. It has also helped biologists understand what causes the blooms in different areas. The research team’s long-term goal is to be able to predict toxic algae blooms before they occur. 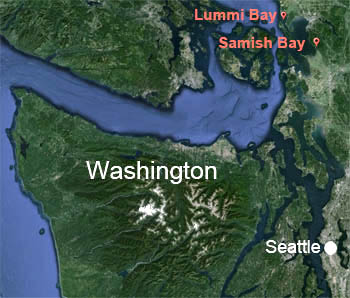 This map shows the locations of the two aquaculture facilities in the Pacific Northwest where Environmental Sample Processors are being deployed during the summer of 2013. Base map: Google Earth.

Growers and researchers in the Puget Sound area already know that harmful algal blooms are more likely in late summer and fall, when light winds and tidal currents coincide with warm air and water. What they don’t know is whether small “seed populations” of harmful algae are present at any given time. Because the ESP can detect even small populations of algae, and send the results to shore in real time, it could provide the information necessary to predict blooms with much greater accuracy.

By combining weather forecasts with ESP measurements, NOAA researchers hope to develop an early-warning system for harmful algal blooms. Such a system might be able to predict blooms up to a week in advance. With advance warning, health officials and shellfish growers could step up their on-site monitoring, postpone harvests, or take other steps to mitigate the effects of the bloom.

Not only would such a prediction system save millions of dollars for aquaculture and seafood companies, it would help protect the public from harvesting or purchasing toxic seafood. The ongoing experiments demonstrate, once again, the usefulness of MBARI’s Environmental Sample Processor in both oceanographic research and in protecting public health and safety.