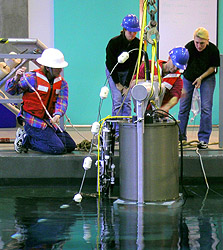 A team of MBARI researchers works on the ESP next to the MBARI test tank. Image: Kim Fulton-Bennett (c) 2006 MBARI

Since 2005, MBARI researchers have worked with colleagues at Lawrence Livermore National Laboratory (LLNL) and Spyglass Biosecurity to add functionality and marketability to MBARI’s Environmental Sample Processor. This teamwork was recently recognized in the form of an “Outstanding Partnership” award awarded to LLNL by the Federal Laboratory Consortium for Technology Transfer (FLC).

The Environmental Sample Processor (ESP) is a robotic biochemistry lab that can be placed in the ocean to analyze genetic material or other organic compounds created by microorganisms in seawater. After performing these analyses, the ESP can send the results back to shore in real time. Such analyses can indicate what types of micro-organisms are present in the water around the ESP. The ESP can also detect complex organic materials such as the toxins produced by some red-tide algae.

Researchers from LLNL worked with MBARI to add a module to the ESP that uses “quantitative polymerase chain reaction” (qPCR) to make copies of genetic material present in a sample. This process allows researchers to determine not only what types of organisms are present in a particular sample, but also the concentrations of these organisms. qPCR also allows the ESP to detect organisms that are present in very small numbers.

Not surprisingly, the ESP has attracted worldwide attention, not just as a tool for marine biology, but also as a method for monitoring water quality. Because of the ESP’s many potential uses, MBARI and LLNL teamed with McLane Research Laboratories and Spyglass Biosecurity, Inc. to manufacture and market the device. In June, 2010, the U.S. Environmental Protection Agency (EPA) received the first commercially-produced ESP, and will use it to monitor harmful algal blooms in the Gulf of Maine.

The ESP was developed at MBARI with support from the David and Lucile Packard Foundation and the National Science Foundation’s Ocean Technology Interdisciplinary Coordination (OTIC) program. The PCR module for the ESP was designed and merged with the ESP with support from NASA’s Astrobiology Science and Technology for Exploring Planets (ASTEP) program and from the Gordon and Betty Moore Foundation. The transfer of the ESP technology to Spyglass Biosecurity and McLane Research Laboratories (the manufacturing partner) has been supported by the Packard Foundation, the Moore Foundation, NASA ASTEP, NSF OTIC, and the Center for Microbial Oceanography Research and Education (C-MORE).

As the list of contributors above indicates, the development of the ESP has been supported by many different organizations. The latest chapters in this saga have involved close collaboration between MBARI, LLNL, Spyglass Biosecurity, and McLane Research Labs. We are pleased that this partnership has been recognized by the Federal Laboratory Consortium for Technology Transfer.