In the spirit of California Rideshare Week, MBARI employees celebrated six years of vanpooling and hundreds of gallons of gas saved by bicycling to work. Spurred on by one employee, Steven Hallam, who entered a local commuter contest, MBARI’s vanpoolers and bicyclists gathered outside the institute’s main building to create a “portrait of alternative transportation at MBARI.” 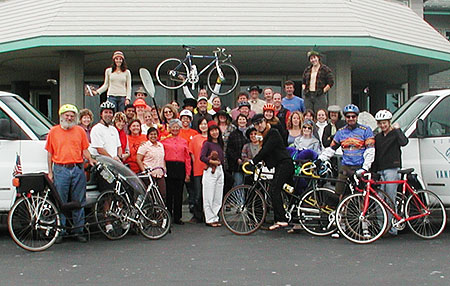 Some of MBARI’s vanpoolers and bicycle commuters gather for a group photo to celebrate alternative transportation at MBARI. Photo: Todd Walsh © 2003 MBARI

In fact, MBARI’s vanpool program has been widely praised by its employees and is a model for other businesses and organizations. Although MBARI is located in Moss Landing, near the center of Monterey Bay, most MBARI employees live 20 to 25 miles away, in the urban areas of Monterey, Santa Cruz, Salinas, and Watsonville. MBARI’s vanpool program was designed to help reduce air pollution, gasoline consumption, and traffic on heavily-used State Highway 1. The program also promotes a sense of community and provides a chance for informal communication among MBARI’s scientists, engineers, and other employees.

Norm Steinberg, MBARI director of Human Resources, says of the vanpool program, “It’s definitely a morale booster in that people know that they’re doing something good for the environment. It also provides an opportunity for employees to get to know each other better outside of the work setting.”

The vanpool program emerged in the spring of 1997, after months of meetings and discussion among interested employees to work out appropriate routes, schedules, and rules for riding. MBARI eventually purchased four large vans, each of which seats up to 12 people. MBARI also uses an existing company minivan to cover one route that has fewer riders.

Each of MBARI’s vans is outfitted with cell phones, safety equipment, and first-aid kits, as well as bicycle racks. The bicycle racks, in particular, have been a great benefit for those who bike to work or use bicycles to get around during the work day, since they can “hitch” a ride home in the evening if necessary. MBARI pays for van maintenance and insurance; employees pay a fixed monthly fee to cover gasoline costs. Van drivers pay no fee.

Many van riders are enthusiastic about the program. “I was amazed how much more relaxing it was riding the van,” says research technician Shannon Johnson, who joined MBARI in the spring of 2003. “I’m just sorry I didn’t start riding sooner.”

Every morning the five vans pull into the MBARI parking lot, bringing employees from many parts of Santa Cruz and Monterey counties. Currently, the four vans serve Monterey and Pacific Grove, Salinas and Marina, Santa Cruz, Capitola and Aptos, respectively. The minivan brings riders from Prunedale, in eastern Monterey County.

As employees come and go, the MBARI human resources group works with riders to re-evaluate the routes and make changes as necessary. This flexibility and employee involvement is another key to the success of the program.

In addition to participating in the vanpool program, several groups of MBARI employees ride bicycles to work at least one day a week. This is no mean feat, since the majority of these riders have to cover 20 to 25 miles to get to work. Many of these employees ride together for mutual support and safety during their commute, which includes some riding on heavily traveled highways.

During the summer of 2003, MBARI bicycle commuters kept track of their mileage and came up with some impressive figures. Over a single 10-week period, they covered almost 7000 miles and saved about 250 gallons of gas. These groups of intrepid bicyclists bring a new meaning to the term “ridesharing.”