The FOCE concept started in 2004 with a simple sketch and discussions between MBARI science and engineering in response to an internal call for a new science initiative that would take advantage of the coming cable observatory systems being planned as a test bed at MBARI. The FOCE prototype frame and control system was created early in 2005 and deployed in the spring and summer of that year. The FOCE prototype produced very promising results. In 2006 and 2007 we focused on supporting in situ experiments to solve the equations that drive CO2 kinetics and relate the effects of temperature, pressure, and salinity. During that time we connected with the external science community regarding FOCE and sought out their potential interest in a system like this for more general use as an experimental unit. We have also been building our initiative team, and happily this now includes a significant and energetic policy component. After attending a series of workshops, panels, giving talks, and running very detailed CO2 kinetic experiments we held a workshop jointly with the Stanford Center for Ocean Solutions (COS) at MBARI in March 2007. The core team at MBARI is now set, we have interested scientists at several institutions around the United States (NOAA, NSF Program Mangers, Stanford’s Wood Institute – COS and WHOI, to mention a few) as well as P.I.s in Canada, England, France, Taiwan, Japan, and Australia. Additionally, the national media has become aware of the ocean acidification issue and the connection with anthropogenic CO2.

Plans for additional gas manipulation options are desired; for example there is strong interest in controlling oxygen levels. Another area of development still to be addressed is tissue sampling and preservation for recovery of specimens obtained from animals who are exposed to the requested CO2 enrichment levels. The primary design planned is for a small controlled flume, with a delay loop to allow the full ΔpH signal time to be developed, thereby avoiding the very large pumping requirements associated with high velocity events. We propose using the MARS cable for development purposes, with the power supply and real-time access to data created by this facility. The first year will see technical development and component testing, with active engagement in the permit planning and public outreach process. The second year will see the first short-term assembled system tests, with ROV delivery of CO2-enriched water to the experimental site. The third year will see final testing, and the inclusion of external user groups in developing use scenarios and system training. 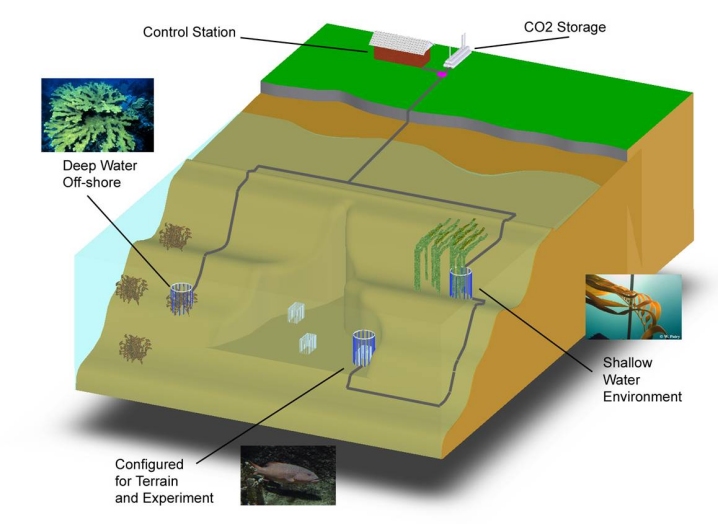