Emerging science of a high-CO2/low-pH ocean

This photo shows the 10-meter-long FOCE system on the seafloor in Monterey Bay. In the center of the image, you can see the clear plastic cover for the chamber where deep-sea animals are exposed to acidified seawater. Image: © 2011 MBARI 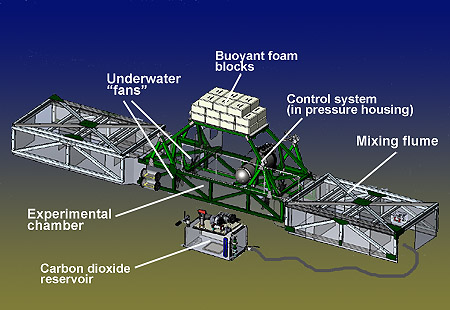 This diagram shows some of the main components of the deep-water FOCE system. The foam blocks are in different places on the current version of the experiment. Image: © 2011 MBARI 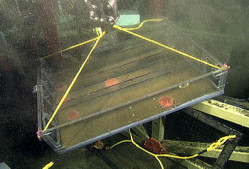 This image shows sea urchins in a “raceway” being lifted out of the experimental chamber of the FOCE system by the manipulator arm of MBARI’s remotely operated vehicle Doc Ricketts. Image: © 2011 MBARI

Within each experimental chamber, the ROV placed a plastic box containing five urchin “raceways” (see photo). Every week or so, Barry’s team used a ROV to remove five urchins from the bag in each chamber. They then placed one urchin at the end of each of the five raceways. At the other end of the raceways, the researchers placed the urchins’ favorite food—a mass of decomposing kelp.