This image shows a cross-section of San Pedro Bay made by MBARI’s Gulper AUV on April 18, 2014. The colors indicate the amount of chlorophyll (an indicator of algae) at various depths and distances from shore. The red and yellow band represents a deep layer of algae about 10 to 30 meters below the surface. The white circles indicate where the AUV collected water samples, using it’s onboard computer to sample areas that had high concentrations of chlorophyll. Image: © 2014 MBARI

It’s now late May and the spring 2014 ECOHAB field experiment is winding down. Researchers from the University of Southern California (USC) are still conducting occasional surveys of the San Pedro Bay, but the rest of the instruments have been recovered. Now the ECOHAB researchers are busy analyzing all the data they collected using their menagerie of undersea instruments.

Although much analysis remains, the researchers are already beginning to sketch out some initial findings. A few of these findings became apparent even while the experiment was still in progress, thanks to MBARI’s web-based data visualization systems. 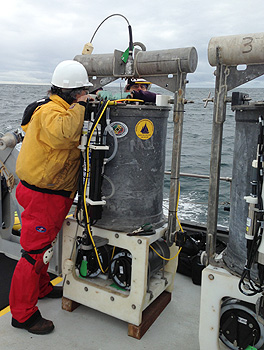 Gliders and Environmental Sample Processors caught the peak of the bloom

Although USC’s underwater gliders monitored conditions in San Pedro Bay before the experiment, they found no evidence of harmful algal blooms until the week that the Environmental Sample Processors (ESPs) were deployed. As biological oceanographer John Ryan put it,

“We got down there with the ESPs and essentially dropped them right into an existing bloom.”

Data from the ESPs documented both the peak of the bloom and its subsequent decline. The researchers were particularly interested in one type of harmful algae—diatoms in the genus Pseudo-nitzschia. However, the ESP data indicated that Pseudo-nitzschia diatoms were just one of several different types of algae present during the bloom. “We were seeing Pseudo-nitzschia everywhere,” Ryan said, “but they weren’t the dominant algal species anywhere.” MBARI Postdoctoral Fellow Holly Bowers is analyzing water samples to determine which species of algae were dominant at different points during the bloom.

Recent research shows that in San Pedro Bay, human wastewater outfalls contribute large amounts of the nutrients that phytoplankton such as Pseudo-nitzschia need in order to grow. These nutrients are typically released from pipes or emitters on the seafloor. However, most phytoplankton blooms occur in the sunlit waters within about 10 meters (33 feet) of the sea surface. Thus, nutrients from wastewater are much more likely to cause blooms when natural processes transport water from the seafloor up toward the surface.

The ocean circulation patterns that drive this transport are an important piece of the puzzle, and the 2014 ECOHAB experiment provided important new information on these circulation patterns in San Pedro Bay. Data from the early part of the experiment suggested that the large algal bloom at the beginning of April was the result of a period of brisk west winds, which brought cold, nutrient-rich water toward the surface (a process called upwelling). Ryan commented, “We know that this bloom was caused by an upwelling event because we had the wind data as well as ocean-temperature data from gliders and satellite images.” 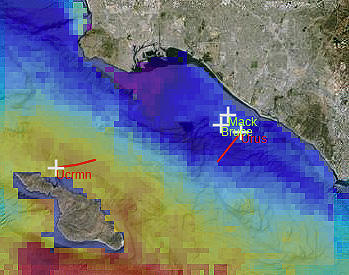 This satellite image shows the temperature of the ocean surface in and around San Pedro Bay on April 2, 2014. The purple and blue areas show an upwelling of cold water near the north end of the bay. The lines, symbols, and letters indicate the locations of the various instruments around the bay. Image: © 2014 MBARI

The researchers were surprised to discover that this plume of cold, upwelled water originated within San Pedro Bay, rather than coming into the bay from more exposed coastal waters. Ryan speculates that this upwelled water could have contained nutrients from near-shore wastewater outfalls located in the bay. The research team will be examining their data to better understand how natural ocean-transport processes interact with human activities such as wastewater discharge.

In between blooms, some algae survived in deeper water

One key to understanding harmful algal blooms is determining what happens to the algae in between bloom events. Data from the ECOHAB experiments provided researchers with one possible answer to this question, at least for blooms in San Pedro Bay.

During both the 2013 and 2014 ECOHAB experiments, researchers noticed that, between periods of vigorous ocean circulation, algae became less abundant and sank down from the surface waters. Rather than sinking all the way to the seafloor, these algae accumulated at certain depths. The researchers speculate that these deep algae received just enough sunlight to survive, but not enough to support rapid growth.

The researchers propose that these deep algae could have formed “seed populations” for later blooms. Under this hypothesis, the algae would remain in deeper water until strong winds caused upwelling that transported the algae up toward the surface. This same upwelling would also transport deep, nutrient-rich water toward the surface. Once the algae reached the surface, the increased sunlight and abundant nutrients would allow them to reproduce rapidly, forming blooms.

In the aftermath of the April 2014 bloom, researchers used MBARI’s “gulper” AUV to collect many water samples from areas where algae congregated after sinking down from the surface. These samples are still being analyzed to determine what types of algae were present in between blooms. The resulting data will be very useful in understanding the phytoplankton ecology of San Pedro Bay, both during and after algal blooms.

Over the past few years, the ECOHAB research team has collected gigabytes of data from moorings, AUVs, gliders, drifters, ships, aircraft, and satellites. Experiment by experiment, these data are providing new clues about how and why harmful algal blooms develop. As Ryan said, “The wide array of technologies deployed during the spring 2014 ECOHAB experiment provided a tremendous catch of valuable data, and the research team is already harvesting the new insights from these data.”