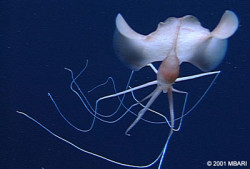 Research sometimes leads to work of surprising diversity. Our studies of Hawaiian volcanism have generated papers on the Earth’s early history, archeology, and observations of unusual animals, in addition to the work on coral reefs, landslides, biogeography, and other wide-ranging topics highlighted in other pages of this web.

Our research on other topics around Hawaii

NORTH OF OAHU – Large, unknown squids have now been observed eight times from submersibles at bathypelagic depths in four ocean basins. The most recent was on Tiburon dive 327 north of Oahu at 3380m depth, and the animal was estimated to be 4 to 5 meters in length. The squids are believed to be of the family Magnapinnidae, which are characterized by tentacles and arms with slender elongate tips and very large terminal fins. They also have a sharp bend in the arms that appears to coincide with a change in sucker distribution. The identity cannot be certain until specimens are captured. That so many similar animals have been seen at similar depths in four of the world’s oceans implies that these squids are comparatively common world-wide. That such a large animal could be common in the world’s largest ecosystem, yet has not previously been captured or observed, is an indication of how little is known about life in the deep ocean.

Using Mn crusts as a proxy for age dates

HAWAIIAN ISLANDS – Black manganese-iron crusts form on most exposed rock on the ocean floor. They are well developed on the steep lava slopes of the Hawaiian Ridge and have been sampled during dredging and submersible dives. The crusts also occur on fragments detached from bedrock by mass wasting, on submerged coral reefs, and on poorly lithified sedimentary rocks. The thickness of the crusts was measured on samples collected since 1965 on the Hawaiian Ridge from 140 dive or dredge locations. Fifty-nine (42%) of the sites were collected in 2001 by remotely operated vehicles (ROVs). Thinner crusts found on many samples apparently result from post-depositional breakage, landsliding, and intermittent burial of outcrops by sediment; the maximum crust thickness was selected from each dredge or dive site to best represent crusts on the original rock surface at that site.

The measurements show an irregular progressive thickening of the crusts toward the northwest – i.e., toward the older volcanic features with increasing distance from the Hawaiian hotspot. Comparison of the maximum crust thickness with radiometric ages of related subaerial features supports previous studies that indicate a crust-growth rate of about 2.5 mm/million years. The thickness data not only allow a comparison of the relative exposure ages of features offshore from different volcanoes, but also provides specific age estimates of volcanic and landslide deposits. The data indicate that some of the landslide blocks within the south Kona landslide are the oldest exposed rock on Mauna Loa, Kilauea, or Loihi volcanoes. Crusts on the floors of submarine canyons off Kohala and East Molokai volcanoes indicate that these canyons are no longer serving as channelways for down-slope, sediment-laden currents. Mahukona volcano was approximately synchronous with Hilo Ridge, both being younger than Hana Ridge. The Nuuanu landslide is considerably older than the Wailau landslide. The Waianae landslide southwest of Oahu has yielded samples with the greatest manganese-iron oxide crusts (9.5mm thick) and therefore apparently represents the oldest submarine material yet found in the study area. The submarine volcanic field 100 km southwest of Oahu is apparently younger than the Waianae landslide.

LOIHI – Noble gases are used as tracers to decipher differentiation processes in the mantle, and provide evidence for a severely degassed shallow mantle, associated with mid-ocean ridge basalts, and a less degassed deep reservoir, associated with hot-spot mantle plumes. Dunite xenoliths from Loihi, Hawaii and subglacially-erupted basalts from the Reykjanes Peninsula, Iceland were crushed in vacuo and the noble gases were measured. Both of these mantle plume sources of noble gases contain a nucleogenic and primitive neon ratio that is composed of a primordial component different from the neon in present-day solar wind, but indistinguishable from the occurrence of solar neon in meteorites. This suggests that Earth’s solar-type rare gas inventory was acquired during accretion from small planetesimals irradiated by solar wind from the early sun. This scenario contrasts with models where a massive proto-Earth gravitationally captured a dense primary atmosphere within the dense solar nebula, the atmospheric nuclides were subducted into the mantle, which then experienced fractionation and partial loss to the atmosphere. However, non-radiogenic argon, krypton, and xenon isotopes derived from the mantle have non-solar compositions and indicate a contribution of atmosphere-like gases that could be due to subduction into the mantle early, rather than recently, in Earth’s history.