MOSS LANDING—The new MBARI mooring deployed earlier this month broke free from its anchor during the heavy storm Saturday, December 14. The oceanic buoy was anchored 52 kilometers from shore in Monterey Bay. It successfully sent data back to shore even through the storm. The mooring is an engineering prototype for the MBARI ocean observing system (MOOS) project. The mooring was intentionally deployed during the winter to monitor how the buoy and cable respond to environmental stresses when wind and waves reach their maximum strengths. 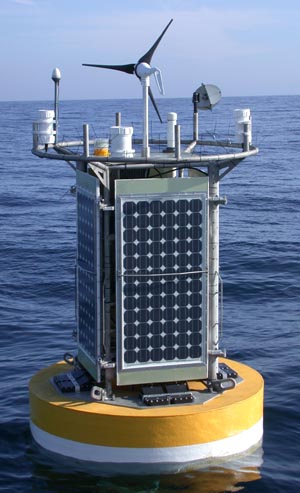 The MOOS mooring differs from most oceanographic moorings in several respects, the primary one being the cable that connects the surface buoy to its anchor. The cable contains copper and fiber-optic wires for power and data communications from the surface to the seafloor. In the upper portion of the cable, the delicate wires and fiber-optic strands are coiled within a thick, flexible hose. This strain-relief section protects the electro-optical elements from movements of the buoy above.

Just before the mooring broke free, the strain gauges were recording loads that approached the predicted loads for 25-year storms off the California coast. Winds were recorded at 93 kilometers per hour (50 knots) and the significant wave height (mean height of the largest one-third of the waves) exceeded eight meters (27 feet). The surface conditions were further aggravated by the southerly winds opposing the northwesterly swells.

On December 18, MBARI’s research vessel Point Lobos braved rough weather to retrieve the drifting buoy north of Santa Cruz. The MOOS mooring team is now analyzing the buoy and remaining cable to determine what happened and intends to re-deploy the mooring in the bay at a later date. The mooring cable has a clean break around 1500 meters from the surface float (total length of the cable is ~2320 meters). The cable was designed to withstand up to 30,000 pounds of force yet the maximum loads recorded on the cable’s strain gauges were less than 15 percent of this level. When recovered, the cable section that remains attached to the anchor, as well as the section just retrieved, will be sent for analysis to help understand the cause of the break.

The MOOS mooring was designed to provide more power and connections for more scientific instruments than are supported on traditional oceanographic buoys. An array of solar panels and a wind generator on the surface buoy generate five times more power than a typical oceanographic mooring. The mooring also contains a new MBARI-designed onboard controller and sensor interface. The controller, using Java and a network interface, transmits data back to shore via satellite, providing the potential for this type of mooring to be used in any location within 300 kilometers of the U.S. west coast. The transmitted data are archived by MBARI’s new shore-side data system, a data-management scheme being developed to handle the breadth and volume of data generated by the MOOS project.

This MOOS mooring was designed to test engineering innovations. It is a prototype for a version planned for 2004 that will provide real-time communications to many science instruments both in the water column and on the ocean floor.