DNA from the deep 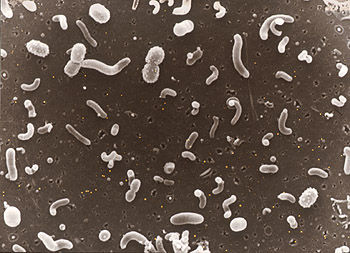 Thousands of different types of microbes inhabit every cubic centimeter of seawater. Although a few types of microbes been studied in detail, DNA studies will help scientists learn about the many species that have yet to be identified. Image: Ed DeLong (c) 2000 MBARI

What kinds of microbes live beneath the surface of the open ocean? What are they doing down there? These are the sorts of questions that MBARI researcher Chris Preston has been trying to answer in her research. But instead of using a microscope (even under a good scope, most bacteria just look like little dots or squiggles), Preston analyzes DNA from marine microbes to determine what types are present and what biochemical tricks they use to survive.

Working with microbiologist Ed DeLong and his team at MIT, and with David Karl at the University of Hawaii, Preston recently coauthored a paper that describes the DNA of microbe communities at seven different depths in the tropical Pacific Ocean, from the surface down to 4,000 meters (about 13,000 feet). This paper was published in the January 27, 2006 issue of Science magazine.

Smaller but more numerous than marine algae, marine microbes such as bacteria and blue-green algae have huge effects on ocean chemistry and possibly even climate. Many of these organisms can’t be cultured in the laboratory, and have only recently been discovered using DNA analysis. Probably thousands of additional species have yet to be discovered or named. 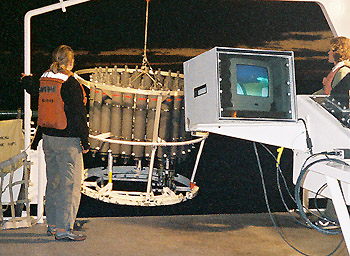 MBARI researchers collected large volumes of seawater using circular arrays of Niskin bottles such as this one (the ring of gray plastic cylinders). The lids of these bottles are left open as the array is lowered down into the ocean. When the array reaches the desired depth, the bottles are closed remotely so that the water from that depth can be brought back to the surface. Image: Lynne Christianson (c) 2002 MBARI

Even though only a small fraction of marine microbes have been studied in detail, DeLong, Preston, and others have learned a lot by analyzing the combined DNA of all the marine microbes in a sample of seawater. The resulting data can give scientists a “birds-eye-view” of entire microbial communities. DeLong first pioneered this technique about 12 years ago. In the last few years, however, technological advances have made it possible for scientists to sequence really large quantities of DNA in a matter of weeks or months. This allows biologists to study not just microbial communities as a whole, but individual groups of microbes within those communities.

For this project, Preston worked with scientists at the University of Hawaii to collect water from the open ocean about 100 kilometers (60 miles) north of the island of Oahu. This spot, the Hawaii Ocean Time Series station, was chosen because it is far from any terrestrial influences, yet its chemistry and (non-microbial) biology are relatively well studied . Because concentrations of microbes were so low in this “oceanic desert” area, Preston and fellow MBARI researcher Lynne Christianson had to spend five to six hours filtering up to 600 liters (160 gallons) of seawater for each sample, in order to obtain enough microbial DNA for analysis.

One of the researchers’ overall goals was to determine how the microbes near the surface are different from those that live thousands of meters down. Not surprisingly, in samples from the sunlit waters within about 100 meters of the surface, the researchers found a lot of microbial DNA sequences that were associated with photosynthesis. This means many microbes in these waters were probably using sunlight as a source of energy. Surface samples also contained microbial DNA that was associated with movement and propulsion. This suggests that movement is important for these microbes, perhaps helping them follow chemical gradients or move from food particle to food particle. 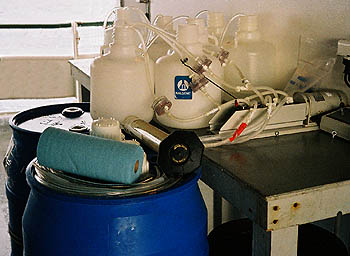 In order to obtain enough DNA for this study, Preston had to process seawater samples using 55-gallon barrels and high-volume electric pumps instead of traditional laboratory equipment such as beakers and pipettes. Image: Lynne Christianson (c) 2002 MBARI

In contrast, DNA from microbes in deeper waters suggests many survive by attaching to and breaking down particles of organic material. Such particles continually sink down from the surface waters into the deep sea, providing food for many organisms in the form of “marine snow.”

Perhaps the most surprising finding of this study was the large amount of DNA that came from viruses, especially in near-surface waters. Since the researchers excluded free-living viruses from their initial sample, they believe that this viral DNA must have come from viruses that had infected living bacteria. Such viruses reproduce within bacterial cells, and can actually transfer DNA from one bacterium to another. This makes the already complicated process of analyzing microbial DNA even more challenging.

Although the paper in Science describes some of the initial findings from DeLong’s team, other researchers will be analyzing their DNA sequences for years to come. As Preston explains, “One thing that other researchers can do is to compare our sequences with those from microbial communities in other regions of the ocean, in soil, in salty brines, or in fresh water environments. They may see similar metabolic pathways or find entirely new ones.”

In fact, just a few years ago DeLong and his colleagues did just this. They compared DNA from marine microbes to DNA from salt pond microbes (archaea) and discovered a new type of photosynthetic pigment, which they called proteorhodopsin. This eventually led to the discovery that marine microbes can obtain energy from the sun through photosynthesis. Similar breakthroughs may emerge from detailed analyses of Preston and DeLong’s seawater samples from the tropical Pacific.